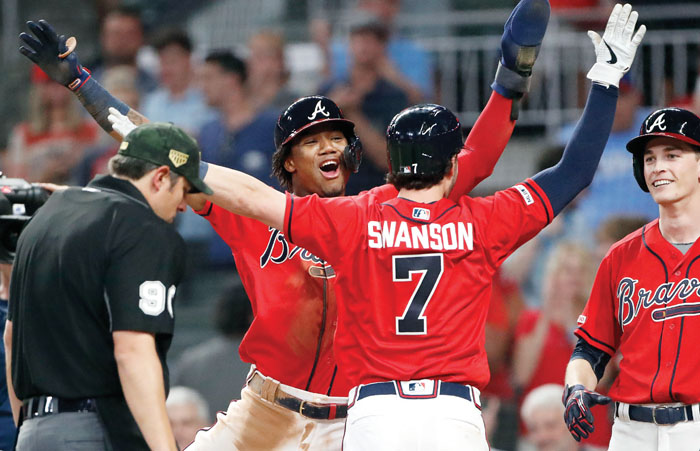 Atlanta Braves' Dansby Swanson (7) celebrates with Ronald Acuna Jr. after hitting a three-run home run in the sixth inning of the team's baseball game against the Milwaukee Brewers on Friday, May 17, 2019, in Atlanta. (AP Photo/John Bazemore)

By CHARLES ODUM AP Sports Writer
ATLANTA (AP) — Max Fried allowed two hits in six scoreless innings, Dansby Swanson hit a drought-breaking, three-run homer and the Atlanta Braves beat the Milwaukee Brewers 12-8 Friday night in a matchup of second-place teams.
Swanson, Josh Donaldson and Tyler Flowers hit home runs off right-hander Corbin Burnes in a nine-run sixth inning. Freddie Freeman homered and drove in two runs.
Fried (6-2) had five strikeouts and walked two batters. The Braves led 12-0 before three relievers gave up eight runs in three innings.
Swanson ended a 0-for-17 slump with his homer into the left-field seats. Flowers’ two-run shot knocked Burnes out of the game after he allowed seven runs on five hits — including three homers — and two walks while recording only two outs.
Atlanta snapped Milwaukee’s three-game winning streak. Jacob Nottingham homered and drove in four runs for the Brewers, who began the night a half-game behind Chicago in the NL Central.
The Braves, chasing Philadelphia in the NL East, have won three straight.
Braves rookie left fielder Austin Riley had two singles, giving him six hits in three games since he was called up from Triple-A Gwinnett.
The Braves improved to 6-1 with Ronald Acuña Jr. hitting leadoff. Acuña had three hits and drove in three runs.
Acuña’s hustle paid off in the first inning when he kept running for a double when Milwaukee’s Lorenzo Cain had a lackadaisical approach to the ball in shallow center field. Acuña moved to third on Swanson’s fly ball to right field and scored on Freeman’s grounder to second base.
Freeman’s homer off Jhoulys Chacin in the third traveled 433 feet before hitting the front of a restaurant behind the first section of right-field seats.
Chacin (3-5) allowed three runs in five innings.
Atlanta led 12-0 before Josh Tomlin gave up three straight hits, including a run-scoring single by Orlando Arcia, in the seventh. Nottingham hit a two-run homer off Tomlin in the eighth.
Ryan Braun drove in two runs in the ninth with a bases-loaded single off Jonny Venters. Nottingham added a two-run single off Wes Parsons. Luke Jackson recorded the final out for his sixth save.
The Braves sent 13 batters to the plate against Burnes and Jacob Barnes in the long sixth inning. Fried walked and doubled in the inning.
Hernán Perez, who started at third base, became Milwaukee’s first position player to pitch this season. The scoreless eighth, despite two walks, was his fifth career appearance on the mound, including three in 2018.
TRAINER’S ROOM
Brewers: RHP Jimmy Nelson (right shoulder) could be moving closer to his first start in the majors since Sept. 8, 2017. Nelson gave up three hits in 5 1/3 scoreless innings in a minor league rehab start for Triple-A San Antonio. He missed the 2018 season while recovering from shoulder surgery and was shut down with elbow soreness following two spring training appearances.
Braves: LHP Jerry Blevins was sent to Triple-A Gwinnett. He was designated for assignment on Tuesday.
UP NEXT
Brewers: RHP Chase Anderson (right middle finger) is expected to come off the injured list to start Saturday night’s game. Anderson is 2-0 with a 3.20 ERA in seven games, including two games started, this season. He was placed on the IL on May 1.
Braves: RHP Kevin Gausman (2-3, 4.50) allowed one run in eight innings in winning his only career start against the Brewers in 2018.
___
More AP MLB: https://apnews.com/MLB and https://twitter.com/AP_Sports