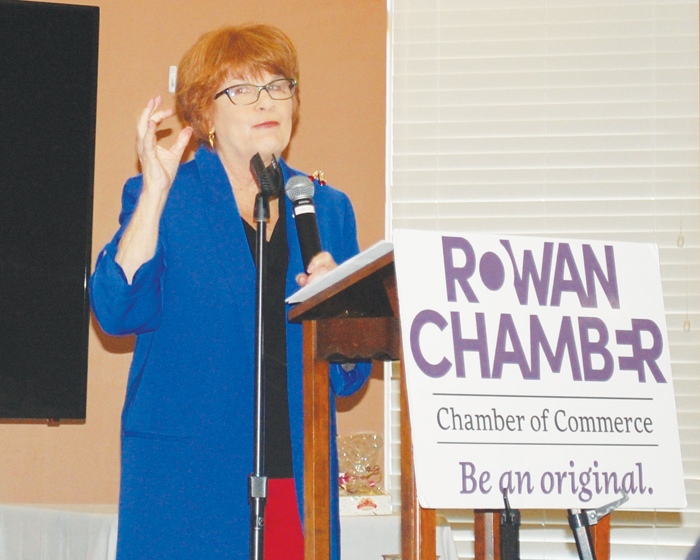 Laura Hamilton speaks on life lessons learned from 'The Wizard of O'z at Thursday's Power in Partnership breakfast.

SALISBURY — Laura Hamilton believes there are lessons for the workplace that can be taken from the movie “The Wizard of Oz.”

Hamilton, the president of her own speaking, training and consulting business, gave a speech titled “Why Are You Looking for the Wizard?” at  Thursday’s Power in Partnership breakfast at Trinity Oaks.

Hamilton said she was looking to rent a chick flick one day and saw “The Wizard of Oz,” which she had not seen since she was a child. She drew similarities from the movie’s plot to the professional world.

“First, we met Dorothy, and she needed to go see the wizard because she wanted to go home,” she said. “Then we met the Scarecrow; he just needed a brain. The Tin Man, he wanted a heart. And then we met the Lion, and he needed some courage.”

She asked those in the audience if they had ever been on a team in which one member didn’t have a brain, one didn’t have a heart, one was without courage and another whined about wanting to go home. The question received laughs.

She said the “no brain, no heart, no courage” team showed at the end of the movie that they in fact had what they though they were missing.

“It was the Scarecrow who had no brain who came up with a strategy to rescue Dorothy,” Hamilton said. “It was the Tin Man who had no heart whose heart broke because Dorothy had captured it.

“And then it was Lion who had no courage who gave us that great scene where he knocks out three guards and they put those uniforms on and go across that bridge over the moat to give us that scene where the tail is swishing.”

She said that is the first life lesson of “The Wizard of Oz.”

Hamilton recalled a friend talking about something incredible that happened in her life that was unplanned. She told her, “It was not by accident, but there was a purpose to what happened.”

Hamilton relayed the lesson Dorothy learned that sometimes what you are looking for is nearby.

“If I ever go looking for my heart’s desire again, I won’t look any farther than my own backyard, because if it isn’t there, I never really lost it,” Hamilton said.

“Hearts will never be practical until they’re made unbreakable,” she added.

The Scarecrow shows that sometimes we don’t need more brains, but we need to use what we already have.

Hamilton said she wished all evil people would dress like the Wicked Witch of the West because often it takes time to see that someone doesn’t have the best intentions.

“How many of you agree that evil can be deceiving?” Hamilton asked. “It looks just like the rest of us.”

Hamilton finished her speech with a final lesson from the movie.

“The overall theme throughout this movie is that there were two women fighting over one red pair of shoes,” she joked as the audience burst out laughing.

The 26th Leadership Rowan class graduated at the breakfast and members were presented with certificates.

Applications for the next Leadership Rowan class are open until May 24. For more information on the program, contact Elaine Spalding at the Rowan Chamber of Commerce at 704-633-4221 or espalding@rowanchamber.com.

Thursday’s Power in Partnership breakfast was the last of this year’s series. A new series will begin Sept. 19.