How to navigate and enjoy the Cheerwine Festival 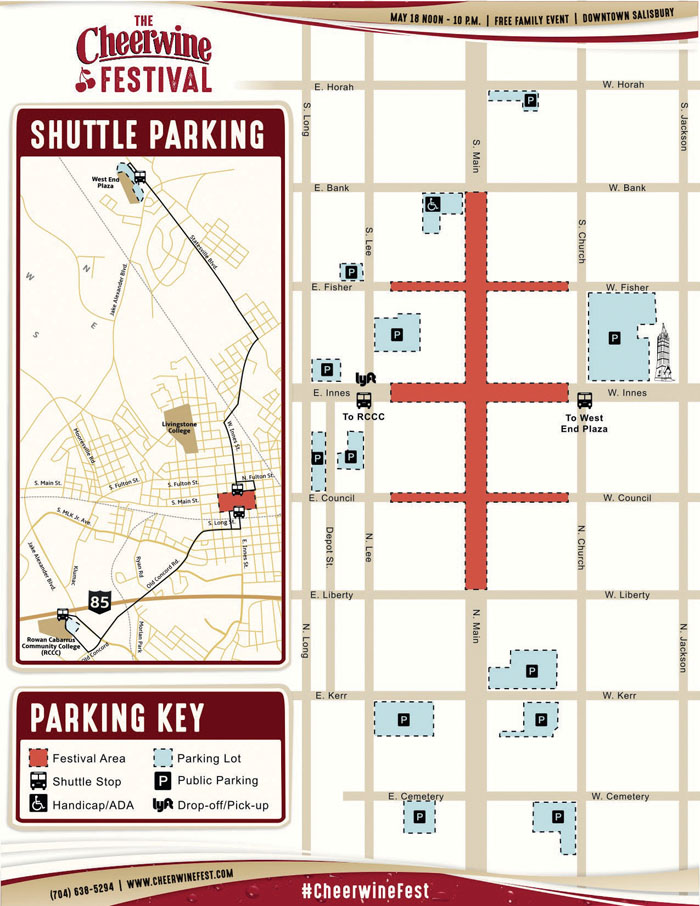 Free parking is available throughout downtown Salisbury. A handicap/ADA parking lot has been designated at 231 S. Main St.

Cheerwine fans will enjoy ice-cold Cheerwine, Southern food, shopping, family-friendly activities, a beer garden and a lineup of live music all afternoon and evening, culminating with multiplatinum rock band Smash Mouth, best known for its hit song “All Star” from the movie “Shrek.”

Several downtown streets will be closed tonight and Saturday for the festival.

The city advises drivers to seek alternate routes during the closures. Portable message boards in town and overhead message boards on Interstate 85 will announce detours.

The 200 block of North Main Street between Liberty and Council streets will be closed beginning at 8 p.m. Friday.

At 6 a.m. Saturday, the 100 blocks of East and West Innes streets will be closed.

Drivers can expect the 100 blocks of East and West Innes streets to reopen after midnight Sunday. All other roads will reopen at 1 a.m. Sunday.

For more information about the Cheerwine Festival, visit cheerwinefestival.com.

Other activities include:
• Noon-6 p.m., Cheerwine will host its first scavenger hunt, with fans searching for clues all over downtown for a chance to win prizes. To participate, visit the Cheerwine Fan Club tent at the festival.
• Cheerwine history will be featured at the Rowan Museum from noon-5 p.m. Back for the first time since the brand’s centennial celebration in 2017, the museum’s free Cheerwine exhibit will take fans on a walk through the soft drink’s last 102 years.
• The F&M Bank Kids’ Zone, open all day, will feature family-friendly games and activities such as rock-climbing and bounce houses.
• Cheerwine merchandise and craft items will be available for purchase, including Cheerwine-branded pet beds, Cheerwine-inspired jewelry, handmade bath bombs and candles.

For more information about the Cheerwine Festival, visit http://cheerwinefest.com 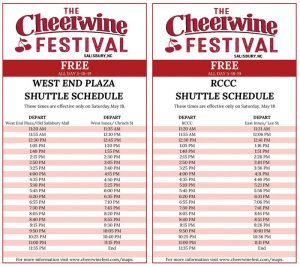 Here is the schedule for free shuttles between West End Plaza and the Cheerwine Festival and Rowan-Cabarrus Community College and the festival.

Downtown prepares for uptick in sales at Cheerwine Festival