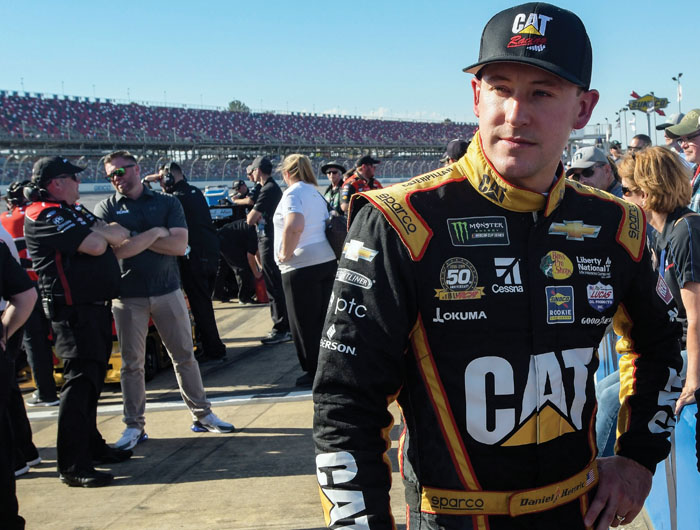 AP Photo/Julie Bennett, File ... In this photo from April 27, driver Daniel Hemric awaits the final round of qualifying at Talladega Superspeedway in Talladega, Ala. Hemric grew up just up the road from Charlotte Motor Speedway. Now the Cup Series rookie is looking to race his way into the All-Star race and have a solid showing next week at the Coca-Cola 600 at his home track. Hemric is from Kannapolis and attended South Rowan High School.

CONCORD (AP) — The idea of having even a slim chance to race his way into the NASCAR All-Star race this weekend at Charlotte Motor Speedway seems surreal for Daniel Hemric.

After all, this is the track where it all started for the 28-year-old rookie Cup Series driver.

He grew up a few miles down the road in Kannapolis, North Carolina, and raced go-karts at CMS when he was 7 years old. He watched Jimmie Johnson win the All-Star race here from the grandstand. And this is where he ultimately put himself on the auto racing map by winning the Legends Million in 2010, collecting a $250,000 first place prize — the largest paycheck at the time in Legends car racing.

“It’s what dreams are made of,” Hemric said of chasing his dream to compete in the All-Star race.

First, of course, he has to qualify.

Fifteen drivers are already locked in for Saturday night’s race. The remaining Cup drivers, including Hemric, will be racing for one of the three transfer spots from the Open or hoping to get an automatic bid by winning the fan vote. Despite only one top five finish this season in his first full season as a Cup driver, Hemric believes he has a chance qualify his No. 8 Chevrolet.

“We are building fast enough cars and capable enough cars to get ourselves into the All-Star race the old-fashioned way,” Hemric said Thursday at the unveiling of a historical marker at Charlotte Motor Speedway to celebrate 60 years of racing at the track. “But we’re also trying to rally everybody together to get us the fan vote. But selfishly I want to do it by racing my way in. If there is a place do it, I want to do it right here.”

Hemric has taken the long road to Cup racing.

While many drivers broke into the sport through having some family connections, Hemric had none starting out. About the only thing he had in common with those in NASCAR is that he grew up in the same hometown as racing legend Dale Earnhardt.

Hemric raced almost everything he could growing up — go-karts, Bandoleros and Legends cars — looking for a shot.

He eventually worked his way up through the Trucks Series and the Xfinity Series before finally earning a full-time ride for Richard Childress Racing.

“I always tell everybody, would you have chosen the way I did it? Probably not,” Hemric said of his journey. “But that is the way I had to do it. That was the opportunity in front of me — to wake up and grind it out every day not knowing if it was actually going to work out.”

He said that has given him a deeper sense of appreciation for racing cars along with some added mental toughness.

“Every time I get strapped in a racecar is one more time than I ever thought I would be able to race,” Hemric said. “What I have been through has really molded me into the man I am today because of going through those tough times.”

But a rookie Cup season will test even the mentally toughest driver.

After a 33rd place finish at Texas, Hemric was so frustrated with the start to the season that he said he texted Childress, teammate Austin Dillon and some others within the organization to say he was “at the breaking point.”

He and his team were putting in the work, but weren’t seeing the results.

All of them told him to stay the course.

He has, and since has picked up three top-20 finishes, including a career-best fifth-place finish at Talladega.

“It has been tough at times this year, but I tried to keep that same attitude and positivity, because at the end of the day there are only 40 people in the world get to do this and I’m one of them,” Hemric said.