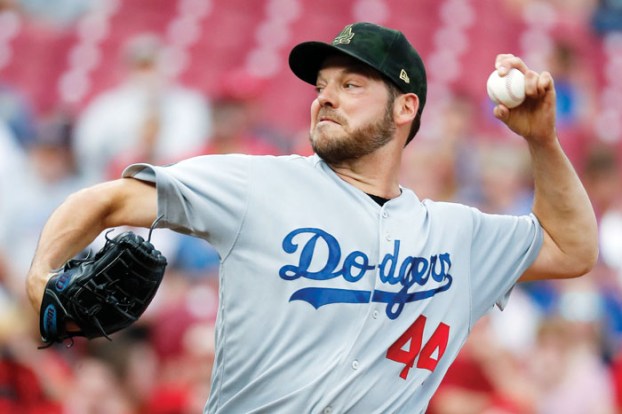 CINCINNATI (AP) — Cody Bellinger hit the last of Los Angeles’ four homers, Rich Hill stuck out a season-high 10 and the Dodgers won their fourth in a row Friday night, 6-0 over the Cincinnati Reds.
Corey Seager, Joc Pederson and Max Muncy also homered at one of the Dodgers’ most comfortable road stops. They’re 34-22 at Great American Ball Park, the second-best mark by any NL team, trailing only the Mets’ 32-19 record.
Bellinger also had a double, raising his batting average to .410.
Hill (1-1) gave by far his best performance in four starts since returning from a sprained right knee. The left-hander allowed two hits and didn’t walk a batter in six innings. He fanned 10 for the first time since June 29 last year against Colorado. Hill also extended the Dodgers’ stretch of solid starts. Since April 25, LA’s rotation is 11-1 with a 2.19 ERA.
The Reds came in with a .219 team batting average that was second worst in the league, ahead of only Miami. They couldn’t overcome another subpar start by Anthony DeSclafani (2-2), who lasted only four innings for the second time in a row.
Cincinnati was blanked for the sixth time, second most in the majors. Only Miami is worse with nine shutouts.
ASTROS 3, RED SOX 1
BOSTON (AP) — George Springer hit his American League-leading 17th home run and Houston picked up its ninth straight victory by beating Boston.
Springer’s two-run shot in the eighth off Rick Porcello put the Astros up 2-1 and Houston held on. The Astros improved to 12-3 this month and matched the 2017 World Series championship team for the best start in franchise history at 30-15.
Will Harris (1-0) got the win with one scoreless inning of relief. Roberto Osuna picked up his 11th save.
Houston won the opener of the three-game series between the last two World Series winners and a rematch of last year’s ALCS, which Boston won in five games.
Christian Vazquez went 3 for 4 with a pair of doubles and an RBI for Boston, which stranded 11 runners and went 1 for 11 with runners in scoring position.
Porcello (3-4) pitched seven shutout innings for Boston. He allowed two runs and six hits and a walk with three strikeouts.
Gerrit Cole pitched five scoreless innings for Houston, allowing six hits, walking one and striking out three.
ORIOLES 5, INDIANS 1
CLEVELAND (AP) — Dylan Bundy kept Cleveland’s lineup in check — and in the ballpark — for 5 2/3 innings and Jonathan Villar hit a three-run homer as Baltimore ended a three-game slide.
Bundy (2-5) didn’t allow an earned run on three hits. He struck out seven and threw a season-high 118 pitches.
Villar connected in the third inning off Jefry Rodriguez (1-3) and Stevie Wilkerson homered in the fifth to help the Orioles win for just the second time in nine games.
Wilkerson added an RBI double in the eighth, and the Orioles racked up a season-high seven extra-base hits — two homers, five doubles.
Bundy improved to 4-1 in six career appearances against Cleveland. The 26-year-old had the Indians off-balance while managing to work around some trouble in the third, fifth and sixth innings.
ATHLETICS 7, TIGERS 2
DETROIT (AP) — Frankie Montas pitched two-run ball into the ninth inning and Oakland beat Detroit for the 14th straight meeting.
Montas (5-2) pitched a career-best 8 2/3 innings, allowing four hits while striking out a career-high 10. Lou Trivino relieved and got the final out after Montas allowed an RBI double to Miguel Cabrera.
Mark Canha and Chad Pinder homered for the A’s, and Khris Davis had three hits.
Oakland’s winning streak against Detroit is tied for the fifth-longest in franchise history, two short of a 16-game streak over the New York Yankees in 1989-91.
Daniel Norris (2-2) allowed six runs, seven hits and a walk in 5 1/3 innings.
Detroit has lost the first five games of a 10-game homestand and been outscored 48-11 in the process.
MARLINS 8, METS 6
MIAMI (AP) — The Marlins scored for the first time in 27 innings, pounded Jacob deGrom for seven runs and snapped a seven-game losing streak by beating New York.
Garrett Cooper’s two-run single in the third brought home Miami’s first runs since Saturday — also against deGrom. Jorge Alfaro hit a 456-foot home run, only the Marlins’ second homer this month, and drove in three. Brian Anderson doubled twice and scored twice.
DeGrom (3-5) gave up nine hits, and the run total against him was a season high.
New York’s Pete Alonso hit two solo home runs, giving him 14 this year. J.D. Davis added his fourth homer for the Mets.
Trevor Richards (1-5) allowed three runs in 6 1/3 innings for his first victory in nine starts this year. Sergio Romo stranded two runners in the eighth and got the final six outs for his seventh save, and the first two-inning save of his career.
The Marlins ended a streak of seven consecutive losses to New York. Miami’s 11 victories this year, fewest in the majors, include three wins against former Cy Young winners — deGrom, Max Scherzer and Corey Kluber.
PHILLIES 5, ROCKIES 4
PHILADELPHIA (AP) — Andrew McCutchen hit a two-run homer, Bryce Harper lined a two-run double and Cole Irvin tossed six effective innings to lead Philadelphia past Colorado.
Irvin (2-0) gave up four runs — three earned — and five hits to win his second career start. Jose Alvarez and Pat Neshek each tossed a scoreless inning and Hector Neris finished for his sixth save in six tries.
Ian Desmond ripped a two-run homer for Colorado. Rockies starter Jon Gray (3-4) allowed five runs and five hits in 4 2/3 innings.
The NL East-leading Phillies snapped a three-game losing streak.
Carlos Estevez replaced Gray and surrendered Harper’s first RBIs since he hit a grand slam on May 7. Harper had been 4 for 29 with 15 strikeouts before the hit. He heard boos after striking out in his first two at-bats.
___
More AP MLB: https://apnews.com/MLB and https://twitter.com/AP_Sports