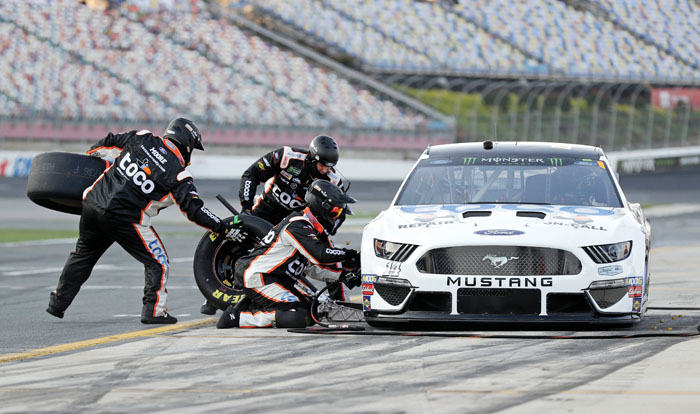 By STEVE REED AP Sports Writer
CONCORD (AP) — Clint Bowyer joked about what he would do if he wins his first NASCAR All-Star race on Saturday night and its $1 million prize.
“A lot,” Bowyer said with a big smile.
NASCAR’s funnyman took a big step toward making that celebration a reality by edging out Kyle Busch to capture the pole at Charlotte Motor Speedway on Friday night, leaving him jacked up.
“It is a million dollars and I don’t care if you are Warren Buffett or the guy that is going to pick up the grandstands after tonight’s race, a million dollars is a million dollars,” Bowyer said. “If you think it doesn’t mean anything different to me than it does to you, you’re crazy.”
The 39-year-old Bowyer’s best finish in an All-Star race was a second-place finish in 2011.
Bowyer hasn’t been the strongest at qualifying.
His last pole in a Cup Series points race came in 2007 — an ongoing string of 417 races.
But he got it done in this non-points race.
Bowyer completed three qualifying laps and one four-tire pit stop in 1 minute, 58.794 seconds to edge out Busch, who was seeking his fourth career All-Star pole.
“We put ourselves in a position to take their million bucks tomorrow night and that is all you can ask for,” Bowyer said.
Defending champion Kevin Harvick qualified third in his pink No. 4 Ford, Austin Dillon fourth and Martin Truex Jr. fifth.
Bowyer said the qualifying format for the All-Star race makes him nervous, but said that isn’t necessarily a bad thing. He was so proud of his pit crew that he brought them over to get in a picture after the race.
“My pit crew has been doing a jam up job all year long,” Bowyer said. “That is a victory for them.”
This year’s All-Star race will feature a four-stage format — 30 laps, 20 laps, 20 laps followed by a 15-lap shootout.
THE OPEN: Rookie Daniel Hemric grabbed the pole for the Open race on Saturday. Three drivers will advance from the Open into the All-Star race. One other driver will receive the fan vote to round out the field of 19 drivers.
“Anytime you can do that at your home track it’s very special,” said Hemric, who grew up a few miles down the road in Kannapolis, North Carolina.
TOUGH TO REPEAT: Harvick won last year’s All-Star race, but history suggests he will have a difficult time repeating in his No. 4 Ford. Since 1993, Jimmie Johnson is the only driver to repeat as champion.
NEED A WIN: There are several high-profile drivers looking for their first All-Star race win. Brad Keselowski hasn’t won in 10 attempts, Bowyer is 0 for 9 and Truex Jr. is 0 for 7.
RULES PACKAGE: NASCAR will be experimenting with a single-piece carbon fiber splitter/pan designed to create a more stable aero platform and a radiator duct through the hood to reduce engine temperatures in the racecars on Saturday night. The hope is to create better racing and find a usable setup package for when NASCAR rolls out its Gen 7 car in 2021.
___
More AP auto racing: https://apnews.com/apf-AutoRacing and https://twitter.com/AP_Sports