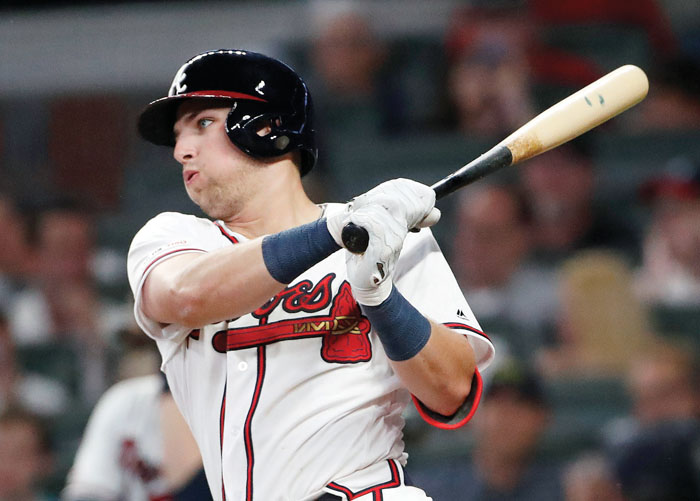 Atlanta Braves' rookie Austin Riley follows through on a base hit in the fifth inning of the team's baseball game against the St. Louis Cardinals on Thursday, May 16, 2019, in Atlanta. (AP Photo/John Bazemore)

Yasmani Grandal and Mike Moustakas also went deep as the Brewers won their third in a row.

Yelich homered in the first for a 1-0 lead off Zach Eflin (5-4) and added a solo drive off Edgar Garcia in the eighth to make it 8-3.

DETROIT (AP) — Jurickson Profar hit his first career grand slam, and Oakland won its 13th straight over Detroit and its eighth in a row at Comerica Park

Detroit has been outscored 41-9 while losing the first four games of a 10-game homestand.

Spencer Turnbull (2-3) allowed six runs, only one of which was earned, five hits and two walks in four innings.

WASHINGTON (AP) — Gerardo Parra hit a tiebreaking, two-run homer in the fifth and Sean Doolittle stopped New York’s ninth-inning rally by striking out Keon Broxton with the bases loaded for his seventh save. Washington won two of three against the Mets for its first series win since April 16-18 against San Francisco.

Michael Conforto hit a tying, three-run homer in the third but left with a concussion in the fifth after colliding with second baseman Robinson Canó’s shoulder while chasing a popup. Mets left fielder Jeff McNeil left in the third because of abdominal tightness.

Dan Jennings (1-2) won in relief of Aníbal Sánchez, who left after 1 1/3 innings because of a strained left hamstring that will send him to the injured list. Mets starter Zack Wheeler (3-3) allowed six runs and a career-high 11 hits in six innings,

ATLANTA (AP) — Austin Riley went 3 for 4 and drove in a run, Julio Teheran pitched five-plus scoreless innings, and the Atlanta Braves won for the fifth time in six games with a 10-2 victory over the St. Louis Cardinals on Thursday night.

Riley, who homered in his second major league at-bat Wednesday, doubled off the top of the wall in the second inning and singled in a run in the third. He scored twice.

Teheran (3-4) allowed two hits — a bloop single by Yadier Molina to begin the fifth and a single by Paul Goldschmidt to begin the sixth — and drove in two runs with a sacrifice bunt in the second and a single in the third. Teheran, who has a 0.53 ERA over his last three starts, walked four and struck out four.

Nick Markakis had an RBI double in the three-run third as Atlanta took a 5-0 lead.

The Braves led 2-0 in the second. Markakis walked, advanced to third on Riley’s double and crossed the plate on Brian McCann’s sacrifice fly. Riley scored from third on Teheran’s bunt.

Marcel Ozuna’s 13th homer cut the lead to 5-1 in the sixth off Jacob Webb. Matt Carpenter homered off Touki Toussaint to make it 9-2 in the eighth.

Atlanta went up 8-1 in the bottom of the sixth on RBI singles by Freddie Freeman, Josh Donaldson and Markakis. Ronald Acuña Jr.’s RBI single in the seventh made it 9-1, and Freeman hit his eighth homer in the eighth.

Braves manager Brian Snitker said RHP Mike Foltynewicz will make his next start even though he’s 0-3 with an 8.02 ERA in four starts. Foltynewicz, a first-time All-Star last year, threw a bullpen session Thursday as pitching coach Rick Kranitz and bullpen coach Marty Reed began adjusting his mechanics. “They identified some things on tape and saw some things that maybe can help him,” Snitker said. Foltynewicz, whose season started late because of a right elbow bone spur, will face Milwaukee on Sunday.

Home plate umpire Manny Gonzalez left because of sickness before the top of the fifth and was replaced by first base umpire Jim Wolf. Crew chief Sam Holbrook stayed at third, and Dan Iassogna moved from second to first.

Cardinals: RHP Miles Mikolas (4-3, 3.83 ERA) will make his 10th start when St. Louis begins a three-game series at Texas. In four career starts in the Rangers’ ballpark, the former Texas hurler is 0-4 with a 13.73 ERA.

Braves: LHP Max Fried (5-2, 3.25 ERA) will make his ninth start as Atlanta begins a three-game home series Friday against the Brewers. Fried lasted three innings in his only start against Milwaukee, giving up four runs and four hits and walking three in three innings last July 7.