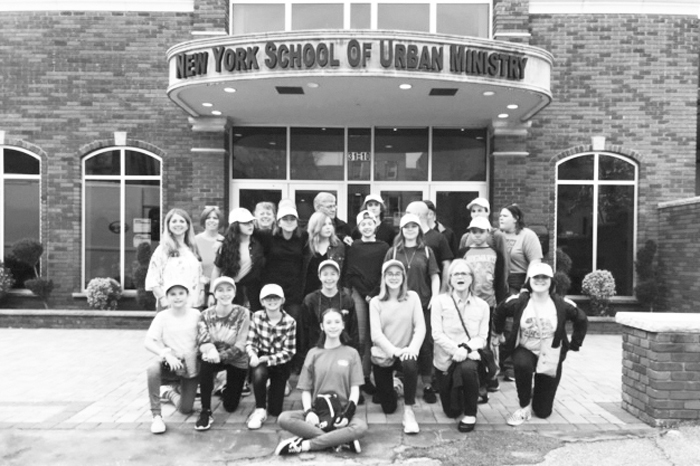 According to a news release, the New York journey started out of a desire to let students experience the city and its culture. But it quickly became something more with the assistance of the ministry.

The goal of the New York Urban Street Ministry School is to train and organize teams to minister to the homeless in New York City. It partners with churches and outreaches to supply aid to culturally diverse communities across the city. It has established relationships with churches and private centers to help with donations, food and resources.

After a training session Friday night, the students were split into two teams. Those 14 and older went with leaders to hand out blankets and food on the streets of Manhattan.

Younger students prayed with and for people in the rain outside a food truck on Friday night in the Bronx. The food truck served hot dogs, sandwiches and hot chocolate to those who braved the rain.

On Saturday, the groups served breakfast to more than 548 people and helped at a mission outreach to the Asian community in Brooklyn. They helped organize and distribute supplies for families whose homes had been destroyed.

On Sunday, students attended the Times Square Church service before seeing the musical “Aladdin” on Broadway. Next, they visited the 9/11 Memorial, where they stood at ground zero, viewed the fountains and saw the names of those who died.

The last full day in New York began with performing a dance and two skits at Battery Park, with students continuing to perform when it began raining.

Once they finished, they took shelter from the rain in a nearby museum before heading to see the Statue of Liberty.

That evening, the group visited with children at a homeless shelter in Brooklyn. They painted faces and nails and made crafts and balloon animals before performing their dance and skits. The group shared with children the love of the Lord and how sin is sticky but God is able to transform our lives.

On April 16, after riding trains, planes, automobiles and boats, the team returned to Salisbury, worn out “but forever blessed and changed,” a news release said.

High school students said the trip was a powerful experience. Melanie Grooms said it was humbling.

“This put faces to the men, women and teenagers who are struggling and homeless and made it more real,” said Sofia Graham.

Jonathan Mosher recalled his experience of giving food, a blanket and even his own socks to a homeless teen.

“It felt good to be able to help in some way,” he said.

Throughout their time in New York, students discussed what it was like to serve outside their comfort zones. Gabby Wilson said they grew closer together as a group by sharing so many experiences together.

‘Aunt Babe’: A quiet force in her family, Ruth…