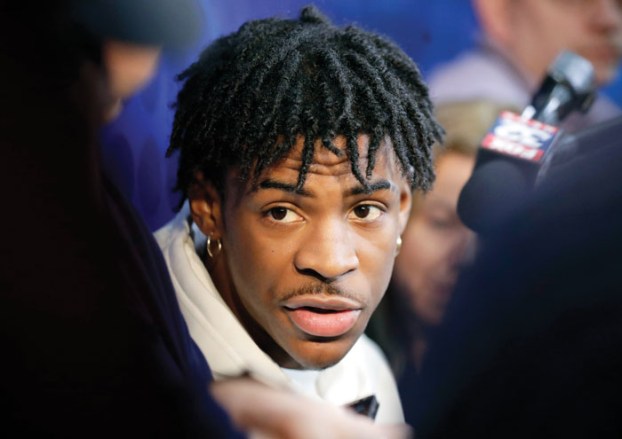 Ja Morant from Murray State, speaks with the media at the NBA draft basketball combine day one in Chicago, Thursday, May. 16, 2019. (AP Photo/Nam Y. Huh)

CHICAGO (AP) — Here’s how much everything has changed for Ja Morant in the last 12 months: He’s gone from being considered the No. 3 option at Murray State to the possible No. 2 pick in the NBA draft.

Put another way, he’s a player from a mid-major and will soon be a multimillionaire.

Even Morant doesn’t fully understand how quickly it has all come to fruition.

“It’s been crazy, honestly,” Morant said. “Coming from being under the radar to one of the most talked-about players now, obviously, it’s been rough. It’s something I’m getting used to. But I’m happy for it.”

Morant made his appearance at the NBA’s draft combine Thursday; he wasn’t playing, but has talked with a handful of teams since he arrived in Chicago. With Zion Williamson seeming very much like a lock to go No. 1 overall, a pick held by the New Orleans Pelicans, that would seem to point to Morant going No. 2 to the Memphis Grizzlies.

Morant has met with the Grizzlies. If they’ve decided he’s their guy, they haven’t told him yet.

“I haven’t heard it myself from Memphis,” Morant said. “But obviously, I’ve seen what was on the internet. I’d really be happy with any team that drafts me. It means they see something in me. It’s just an honor to play this game at the highest level and just to be in the position that I’m in right now.”

Williamson is not attending the combine; he met with teams earlier this week and left Chicago before the combine technically started.

The NBA invited 77 players to the combine. Of those, 41 are listed on rosters to compete in games through Friday. Others will go through various testing and have their measurements such as height, weight and wingspan recorded — but won’t be playing any 5-on-5. Morant is hardly alone in that regard; most of the top players who were invited are doing the same thing, including Texas Tech guard and presumed early lottery pick Jarrett Culver.

“There are a lot of talented guys here,” Culver said. “To be talked about as one of the top players in this draft, it’s just an honor.”

They’re already selling tickets at Murray State for a draft party to watch Morant, so Racers fans can cheer him at least one more time. He helped them to back-to-back Ohio Valley Conference championships and a 54-11 record over the last two seasons. He averaged 12.7 points as a freshman, then 24.5 points and 10 assists while shooting 50 percent as a sophomore.

His stock soared, and he’s about to go places he’s never been. Morant said he’s never played in an NBA arena and doesn’t know much about most NBA cities. All he really knew about Chicago before arriving this week was Michael Jordan and the Bulls. He played in Detroit as a freshman — not in the Pistons’ building, but rather at Detroit Mercy, before a crowd of 1,107.

“Ja Morant, everybody knows about him,” Grizzlies director of player support Elliot Perry said at the draft lottery earlier this week, when Memphis bucked the odds and jumped up to the No. 2 pick. “He was a super-explosive young man, very exciting. I think he has a lot of confidence in himself and his abilities. He’s one of those guys who will be good.”

Morant isn’t the type to proclaim himself the best player in the draft, or even the second-best for that matter. He’s a kid from the small town of Dalzell, South Carolina, from a mid-major school like Murray State, who hasn’t even started to fathom that he’s likely a few weeks away from a contract that will pay him somewhere around $8 million next season.

“I’m just a pass-first point guard who just loves to get his teammates involved,” Morant said. “I feel like my IQ is the strongest part of my game, being able to make plays for me and my teammates.”

Regardless of where he goes, this experience has been a long time coming for his family.

Tee Morant, Ja’s father, was a high school teammate of Ray Allen’s and a good college player who had an opportunity to play professionally overseas. When he found out that his wife was pregnant, he scrapped those playing-abroad plans and stayed home. Ja was born, and he had a coach even before knowing what basketball was.

Morant doesn’t have NBA players that he idolizes. He just tries to play in his dad’s image.

“That’s my motivation,” Morant said. “It’s like I’m living my dream and his dream through me right now.”