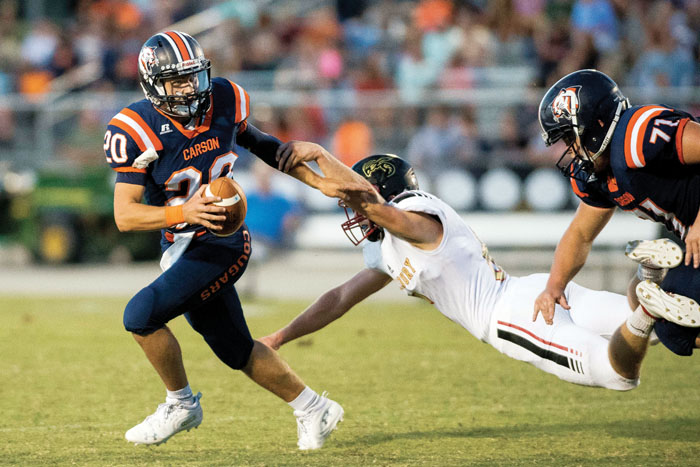 JON C. LAKEY FILE PHOTO / SALISBURY POST ... Carson’s quarterback Josh Lee (20), left, sheds a tackler as he rolls out to pass, during a game last season against Salisbury. Carson won the game, 28-7. Lee is heading to Catawba this fall for football.

CHINA GROVE — Versatility is both a blessing and a curse.

Josh Lee was always that do-everything guy who could plug a hole for the Carson Cougars, so he never really settled into one spot. He played a lot of running back and some quarterback during his career, although receiver probably is his best position.

While he never put up big stats and never made all-this or all-that teams in high school, Catawba College is giving Lee a chance. He’ll be on the team next season and he may surprise people in a year or two.

“It’s exciting just to get a chance,” Lee said. “I was lucky to have coaches who got in my face and pushed me, all the way back to when I was starting out in fifth grade. I’ve been fortunate to have parents who really wanted me to play football and to have a girlfriend (Carson cheerleader Jade Houston) who believes in me.”

Lee thought he might be hanging up his shoulder pads when he played his last game for Southeast Middle School as an eighth-grader.

But he got the football bug again as a Carson freshman. Most of his friends were playing, so he went out. He was one of the faster guys in the jayvee team, so they put him at running back.

His sophomore year brought an injury setback. He missed most of the season.

He returned to a running back role as a junior, but he was called on to start the Central Cabarrus game at quarterback when Cole Sifford was out with a knee injury. He did OK — 43 rushing yards and 9-for-19 for 134 passing yards, including a 28-yard, fourth-quarter touchdown pass to Jamarius Hairston that sent the game to overtime.  Carson lost in OT, 26-20.

Sifford returned for the next game against rival East Rowan. Lee shifted back to running back and contributed 14 tough carries for 54 yards in a 37-34 victory.

“He had injuries early in his career, but he came back from those dings and was a good running back for us his junior year,” Carson assistant coach Josh Trexler said.

The biggest jump for Lee was between his junior and senior seasons.

“He became a leader in the off-season program, bought into the weight room and was voted a captain by his teammates,” Trexler said. “He’s not the loudest, most vocal guy, but his teammates could see that he was dependable and was leading the way.”

Lee went into his senior year sharing quarterback duties with fellow senior Justin Smith.  That heated competition lasted through the preseason, through the scrimmages, and well into the season.

On opening night against South Rowan, Lee didn’t complete any passes, but he ran 10 times for 52 yards, including a 7-yard touchdown run in the fourth quarter to ice the game.

“South was the most fun game of my senior year,” Lee said. “We didn’t play that well in the first half, but in the second half we got together and took care of business.”

Eventually, with Smith, the bigger passing threat, settling in as the first-string quarterback, Lee found a new role and made a transition to wideout. He made receptions in his final two high school games.

“We didn’t throw as much as a lot of teams,” Lee said. “But I enjoyed blocking as a receiver. I  was happy when I could help other people get yards.”

While Carson struggled to a 3-8 record his senior year, Lee enjoyed football so much he wanted to continue. Catawba had interest in getting him as a walk-on, and a visit to the campus exceeded Lee’s expectations. He loved it.

“I got to meet a lot of the coaching staff,” Lee said. “They were all warm and welcoming people.”

Lee was invited to attend a showcase for unsigned seniors not long after that.

“We ran dashes, we jumped and we ran pass routes, and I showed out some,” Lee said. “Catawba called me the next day and told me I had a spot on the team.”

On the academic side of things, he’s interested in Catawba’s athletic training program.