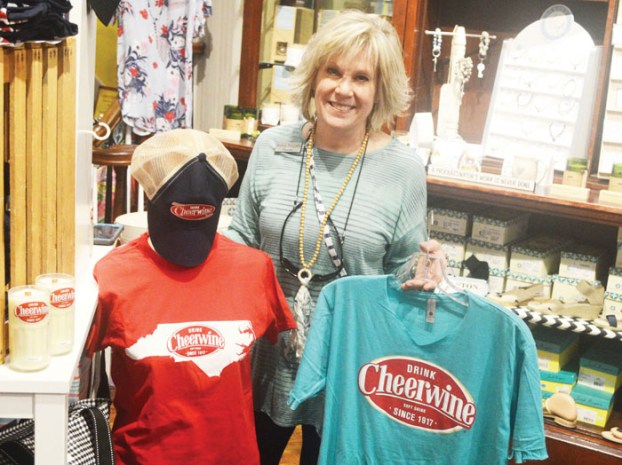 Stichin' Post owner Pam Coffield holds Cheerwine-themed merchandise that will be featured in her store for the Cheerwine Festival. Samuel Motley/Salisbury Post

Downtown prepares for uptick in sales at Cheerwine Festival

The festival will be in the downtown area from noon to 10 p.m. Saturday.

The festival began in 2017 in celebration of Cheerwine’s centennial anniversary. The 2017 and 2018 festivals brought more than 60,000 people to Salisbury, according to Angela D’Amario, a Cheerwine spokeswoman.

This year’s festival is expected to have an equal number of visitors.

There will also be a booth outside with some products, she said.

Stichin’ Post, a women’s accessories shop at 104 S. Main St., is offering a wide range of Cheerwine products and merchandise, said owner Pam Coffield. The store will have Cheerwine-scented candles as well as socks, T-shirts, lanyards and koozies with Cheerwine-inspired logos.

There will also be a booth outside where patrons can browse Cheerwine merchandise.

“Lots and lots of glass bottles” were purchased, Wells said.

Last year, Fuller’s bought 20 cases and sold out in less than three hours, he said. This year, he bought 75.

The market will also have a stand outside, he said.

Mean Mug’s Coffee, at 112 S. Main St, is offering Cheerwine-flavored lattes and frappuccinos, said owner Evelyn Medina. It will have the cherished Cheerwine taste, she said, but stay true to the taste of coffee.

“We have enough Cheerwine syrup to last us to the cows come home,” she said.

The cafe will also serve Cheerwine-flavored waffles on a stick.

There will also be a stand outside the shop, Medina said.

GoBurrito, at 115 W. Fisher St., will be offering Cheerwine-flavored foods, including a Cheerwine dump cake, according to its Facebook page.

An unofficial after-party is planned at the Fish Bowl, said owner Chris Ostle. A band will start playing at 10:30 p.m., the time festival headliner Smash Mouth’s concert ends, he said.

Griffin’s Guitar will be selling raffle tickets for the Vet-Traxx Project, said owner Trent Griffin. The project works to help soldiers with post-traumatic stress disorder through music. Tickets are $1.

Outside the store, there will be live music, but the store itself will be closed, he said.

Sidewalk Deli will be open for business and is expecting a crowd, said owner Rick Anderson.

SALISBURY — Michelle Hillard was moved and honored to see the name of her husband, Rick Hillard, etched in stone... read more