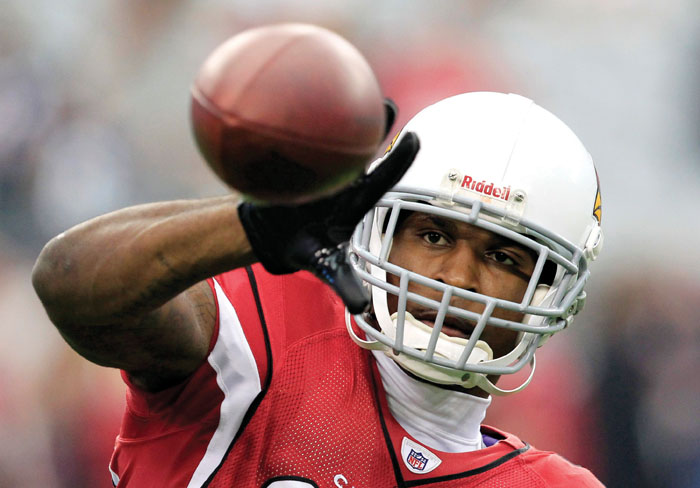 FILE - In this Sunday, Jan. 1, 2012 file photo, Arizona Cardinals' Patrick Peterson warms up prior to an NFL football game against the Seattle Seahawks in Glendale, Ariz. Arizona Cardinals All-Pro cornerback Patrick Peterson has been suspended for the first six games of the 2019 season for violating the NFL's performance-enhancing drug policy. The NFL did not specify Thursday, May 16, 2019 which illegal substance Peterson allegedly used. (AP Photo/Ross D. Franklin, File)

The NFL did not specify Thursday which illegal substance Peterson allegedly used.

Peterson can participate in all offseason workouts and preseason games. He will be eligible to return Oct. 14, before Arizona’s game against the New York Giants.

“Patrick recognizes how disappointing this is for everyone in the organization as well as our fans,” the Cardinals said in a statement. “As we all do, he understands that regardless of intent he is ultimately responsible for everything he puts in his body. Our coaching staff and our players are now aware that we will have to play the first six games without Patrick and they understand they have to rise to the challenge that it presents.”

Peterson is still one of the NFL’s best cornerbacks at 28. The fifth overall pick of the 2011 draft, he has 23 career interceptions despite teams rarely testing him.

Peterson is a three-time All-Pro and he holds the franchise record with eight Pro Bowl appearances, a streak that will likely come to an end with his suspension.

Peterson demanded a trade last season before apologizing. He posted a few cryptic messages on social media last month while deleting all mentions of the Cardinals in his profiles.

The Cardinals have been searching for a cornerback to play opposite Peterson almost since he came into the league. Arizona signed veteran Robert Alford as a free agent this offseason and used a second-round draft pick this year on Washington cornerback Byron Murphy.

Two people with direct knowledge of the trade told The Associated Press that New York agreed Wednesday night to send linebacker Darron Lee to the Kansas City Chiefs for a sixth-round draft pick.

The deal is pending a physical, according to the people who spoke to the AP on condition of anonymity because neither team had announced the move.

It came just hours after the Jets fired general manager Mike Maccagnan and installed Gase as the acting GM while the team begins a search for a replacement.

Lee was New York’s first-round pick in 2016, but was mostly disappointing in his three seasons with the Jets. He was suspended by the NFL for the final four games of last season after violating the league’s substance abuse policy. Lee’s spot on the Jets’ roster was uncertain after New York signed C.J. Mosley to anchor the inside linebacker position with Avery Williamson.

Lee had been the subject of trade rumors all offseason, especially after the Jets recently declined his fifth-year contract option for 2020. Many believed he would be dealt during the NFL draft. Less than three weeks later, Gase made it happen.

In three seasons, Lee had 241 tackles, four sacks, 11 passes defensed and three interceptions — all last season — including one returned for a touchdown. He was the 20th overall pick out of Ohio State in 2016.

Gone are veterans such as Justin Houston and Eric Berry, and second-year general manager Brett Veach has brought in Tyrann Mathieu, Frank Clark, Emmanuel Ogbah and Alex Okafor. But the Chiefs were still looking for help at linebacker.