Salisbury tennis to play for state title on Saturday 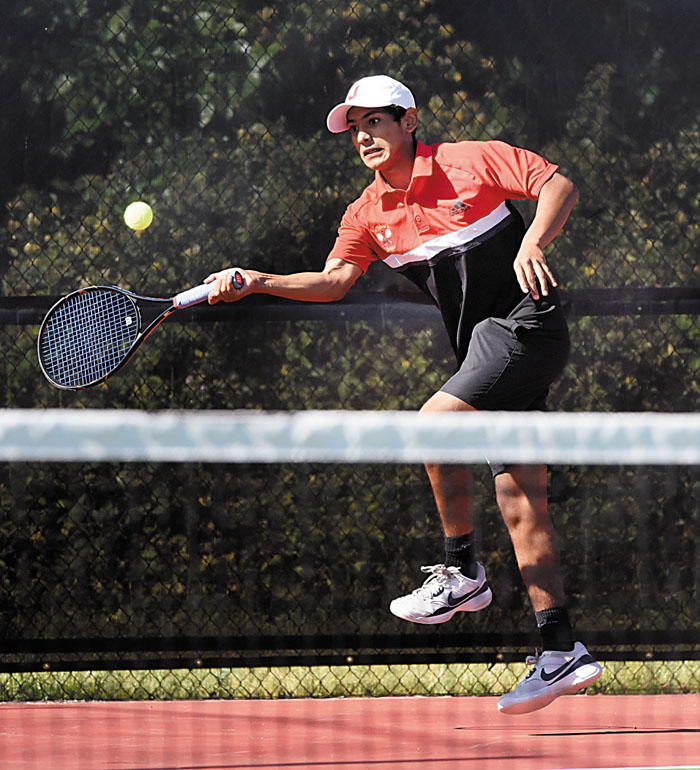 SALISBURY — All eyes were on Juan Salazar early Wednesday evening — and rightly so.

Nearly two hours after the Salisbury junior started his No. 6 singles match with East Lincoln’s Cole Wharton, he put the finishing touches on a painstaking victory that clinched the Hornets’ 5-1 triumph and delivered them into Saturday’s 2A state championship match.

“This is all we’ve been working for,” Salazar exhaled, shortly after unblemished Salisbury (22-0) earned a berth opposite either Clinton or the North Carolina School of Science & Math, Saturday morning at the Burlington Tennis Center. “We wanted to be better than last year’s team.”

Salisbury captured the Western Regional title and will play for its first state championship since 1993. “It’s exciting,” said Roarke Burton, one of five SHS seniors. “It’s been our dream since the end of last season, especially the seniors. This is our last chance.”

It’s an opportunity that wasn’t secured until Salazar bested Wharton, 6-4, 6-4, with a bipartisan crowd of onlookers cheering every point. He needed four cracks at match point before finally prevailing.

“That was nerve-wracking,” Salazar explained. “After I missed out the first time, I started to wonder, ‘What if that was the deciding point?’ But from the very first game, I knew it was going to be a long, difficult match. (Wharton’s) strokes and his skills were much better than anyone I’ve played before.”

Sixth-year Salisbury coach Milton Griffith felt Salazar’s tireless play was a pivotal factor. “Juan will keep hitting it as long as you hit it back,” he said. “I think he wore the guy down a little bit. We didn’t want to go to doubles. Because he won, we didn’t have to.”

His winning effort capped a tension-filled day of single-elimination drama for the Hornets. Besides Salazar, teammate Sean Archer was forced into a tiebreaker at third singles before defeating Connor Hall, 6-3, 7-6 (7-4).

“He was a great opponent,” said Archer, a junior still nursing a right arm muscle strain. “Great strokes — you could tell he was a developed player. He never gave a free point. I had to work for everything.”

Archer trailed 3-0 in the second set before rebounding. “I got broken,” he noted. “Down 3-0 sounds kind of bad, but in my mind I knew it was just one break. After that I stayed consistent and stopped making unforced errors.”

The tiebreaker was simply mind-over-matter. “First one to seven wins,” Archer said. “You’ve got to do whatever it takes to get there.”

“Sean made the adjustment,” Griffith added, “and was able to pull it out. To me, that’s all that matters.”

“I could tell right from the get-go I was having a bad day,” Burton said, moments after falling to 17-3 this season. “My shots weren’t going in and the strings broke on my racket during warmups. That’s no excuse, but I had to use my backup racket. It’s just not broken in. It was really difficult to find my rhythm, especially against such a good player.”

Other Hornets had a smoother ride. Senior Ethan McGee turned heads with his 6-1, 6-1 win over Nick Colannino at No. 2 singles. After McGee improved to 18-2, long-tenured SHS fan Reid Leonard confided, “That’s the best match Ethan has ever played.”

High praise indeed. “Best thing was my forehand,” McGee said. “I overpowered him to where I could win more easily.”

First off the court were Salisbury’s Jander Rodas and Leo Schiavinato. Rodas cruised to a 6-1, 6-0 win against East Lincoln’s Will Owens and Schiavinato topped southpaw Abhi Mehta, 6-1, 6-2.

“Just another match,” shrugged Rodas, now unbeaten in 19 matches. “(Owens) was a good player, but his backhand was weak. And I was able to tee off on his serve. He wasn’t the hardest hitter I’ve ever faced.”

Schiavinato, the Brazilian exchange student who returns to Sao Paulo on June 13, played the net and corners extremely well and improved to 22-0.

“He had a really good cross-court forehand,” he said. “He would try to pass me, so I had to be careful with that. But I was skipping all my shots in. I struggled in a couple games, but never gave up and things worked out.”

East Lincoln coach Rollin Mackel lauded his team after it finished a 13-4 season. “I’m proud of my guys,” he said. “They made it to the state semifinals. It took two hours to lose some of these matches.”

Afterward, Salisbury was awarded Western Regional championship plaque — then celebrated with a brief team meeting that included a few tennis balls being punted into the distance. Beginning today, it focuses only on a state title.

“We feel confident going in,” Griffith said. “We just have to go out and play the best match of our lives and hopefully, bring home a state championship.”

NOTES: Saturday’s match begins at 9:30 a.m with a coach’s meeting scheduled for 9. … Going into Wednesday’s match, N.C. School of Science & Math was 13-0 and Clinton was 20-1. No score from that match was available before press time last night.