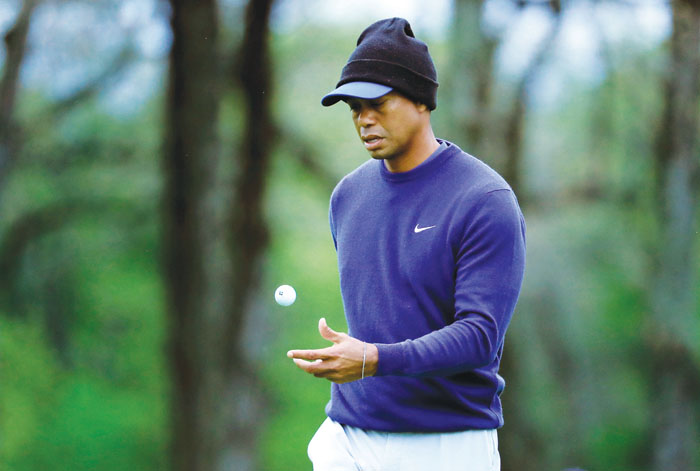 Tiger Woods flips his ball as he walks along the ninth green during a practice round for the PGA Championship golf tournament, Monday, May 13, 2019, in Farmingdale, N.Y. (AP Photo/Julie Jacobson)

FARMINGDALE (AP) — Tiger Woods, the Masters champion, going for the second leg of the Grand Slam on a long, wet course at Bethpage Black.

It all sounds so familiar.

For Woods, it feels entirely different.

The PGA Championship now occupies the second slot in the major championship schedule given its move to May for the first time since 1949, and with only a month between majors, Woods chose not to play a tournament since winning his fifth green jacket.

He is every bit the global superstar he was in 2002 when he followed a Masters victory with a U.S. Open title at Bethpage Black, but he is not No. 1 in the world. And along with being 43, he is two years removed from fusion surgery on his lower back, and some days he doesn’t move as well as others.

The new version of an older Tiger is more than capable.

He showed that last September when he won the Tour Championship at East Lake, his first victory since going through four back surgeries. And he showed in April, with his 15th major, that he was capable of challenging the Jack Nicklaus standard of 18 majors.

Still to be determined is whether Woods can be the dominant force he had been for a dozen years.

“I’m not looking at it like that,” Woods said. “Whether I’m dominant or not going forward, that remains to be seen. What I know is I need to give myself the best chance to win the events I play in, and sometimes that can be taking a little bit more breaks here and there, and making sure that I am ready to go and being able to give it my best at those events.”

Of the top 10 players in the world, Woods (No. 6) and Bryson DeChambeau (No. 8) are the only ones who have not played since the Masters.

This will be only the seventh time that Woods has gone major to major without having played somewhere in between, with mixed results. The most famous was in 2008 when he showed up at Torrey Pines for the U.S. Open on a shattered left leg and won in a playoff.

What held him back this time was emotional exhaustion from a moment in golf that won’t be soon forgotten. Lucas Glover had gone to the movies, taped the final round and was teary-eyed at the end, especially when Woods hugged his son. Brooks Koepka, whose last hope ended when he missed a 10-foot birdie putt on the 18th, recalls being in the scoring area, unable to keep his eyes off the TV.

“I think it’s something that any player, any fan, any golfer was probably glued to the TV at that moment watching it,” Koepka said. “It was pretty neat, pretty special for all of us. I was a little bit disappointed. But at the same time, that’s what our sport needed. We needed him to win a major.”

Koepka, listed among the betting favorites, isn’t about to concede. Bethpage Black, which figures to play even longer than its 7,459 yards in soft conditions, is suited for good drivers like Koepka, Dustin Johnson and Rory McIlroy.

Woods couldn’t reach the green on the par-4 seventh hole with a 3-wood on Monday. Johnson got there with a 3-iron, though he gave it all he had.

Woods now relies as much on his experience as brute strength, though he remains long enough. Padraig Harrington noticed watching the final round of the Masters. Harrington suspects Woods has lost a little ball speed off the club. What got his attention was how Woods played amid a six-player logjam on the back nine.

“He closed it out like he was only interested in winning that tournament,” Harrington said. “He wasn’t interested in proving to the world that he’s a good driver of the ball or anything like that. I think he just was interested in getting the job done. That’s a tough Tiger to beat when he’s in that frame of mind.”

Woods declared himself “rested and ready” after his month away from competition. He says he spent time in the gym and didn’t get back to the grind until he was ready, which was just over two weeks ago.

He came to Bethpage Black last week for 18 holes, a long round that tried to cover every detail of how to handle the course. He figured out quickly that driving will be paramount because of the elevated green and the lush, wet rough. Woods played nine holes Monday, spent Tuesday practicing on the range and chipping area, and planned to play nine holes Wednesday.

“This is not only a big golf course, but this is going to be a long week the way the golf course is set up and potentially could play,” he said. “This could be a hell of a championship.”