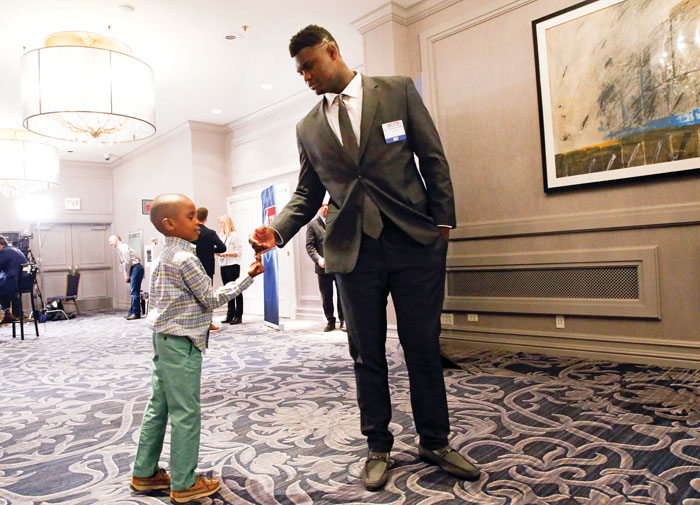 CHICAGO (AP) — New Orleans has bucked the odds and won the NBA draft lottery, and now will have the first chance at choosing Zion Williamson next month.

The Pelicans won the lottery for the first time since 2012, when they selected Anthony Davis. And the lottery win comes after a season when Davis wanted a trade — something that might not seem so appealing to him now, not with Williamson likely coming to New Orleans.

Williamson said he has never been to New Orleans. That might soon change.

“This just jump-starts the process,” new Pelicans executive vice president of basketball operations David Griffin said. “It’ll be harder for me to mess it up than it would have been before this.”

The Pelicans were the biggest winners — and the Grizzlies and Lakers had reason to celebrate as well. They all moved up, much to the chagrin of teams like New York, Cleveland and Phoenix. The Suns, Cavs and Knicks all had the best chance of winning the lottery, and neither even got as much as a No. 2 pick.

Williamson will have an excellent chance at seeing his name added to the list of other No. 1 picks who entered the league with much fanfare in the lottery era, players like LeBron James, Tim Duncan, Shaquille O’Neal, David Robinson and Allen Iverson.

Cleveland will pick fifth, followed by Phoenix, Chicago and Atlanta. Washington has the No. 9 pick, Atlanta goes again at 10 and Minnesota is at No. 11. Charlotte is next up, followed by Miami at 13 and Boston at 14. That pick was conveyed to the Celtics by Sacramento as part of an earlier trade.

The Hawks felt they were big winners, too, after getting two top-10 picks.

“There’s always good players,” said Hawks guard Kevin Huerter, the No. 19 pick in last year’s draft and part of Atlanta’s contingent at the lottery. “Every team just has to go out and find them.”

UCF center Tacko Fall, the 7-foot-6 draft hopeful, played against Williamson in the second round of the NCAA tournament — a 77-76 Duke victory that went down to the very last moment.

, a game where Williamson scored 32 points. Fall was asked Tuesday who he would take with the No. 1 pick in this draft, and he did not hesitate for even a second before answering.

“Zion,” Fall said. “He’s a once-in-a-generation player. I’d seen him on TV a lot, but when you play against this kid, you just see it. He’s different.”

Murray State’s Ja Morant, projected by many as a strong candidate to be chosen No. 2 overall, was among the players in the audience viewing the proceedings.

“I don’t have any reaction,” Morant said. “I was just excited to be here and be in the position that I’m in and just to see how it all played out. Honestly, I don’t know what number or where I’ll land. Obviously, whatever team drafts me, I’ll be happy to go there and bring it every night.”

Williamson was one of three now-former Duke starters at the lottery — R.J. Barrett and Cam Reddish were among the invited players as well.