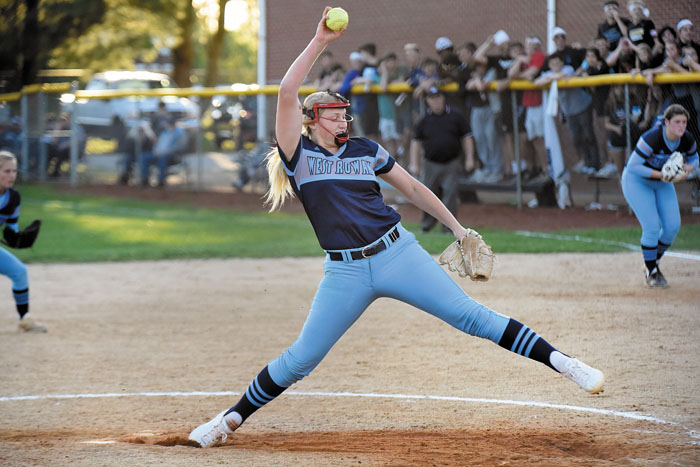 MOUNT ULLA —West Rowan’s softball team hadn’t been shut out since a road trip in late March, but Parkwood’s Anna Laney beat the Falcons, 1-0, in eight innings on Tuesday.

The loss ended the Falcons’ eight-game winning streak and ended their season at 22-4. It was the first home loss for third-seeded West.

“We haven’t had an offensive game like this in a long time,” West coach Jimmy Greene said. “Give credit to their pitcher, but we just didn’t have many good at-bats tonight. We weren’t patient enough. We swung at bad pitches. Maybe we just tried too hard.”

West was held to four singles, with Kenadi Sproul, Megyn Spicer, Mary Sobataka and Reagan Haggas getting one each. Laney struck out six Falcons and walked two.

West pitcher Whitley Arnott (20-4) gave the Falcons a chance to win. She struck out eight and walked four. She allowed only two hits and shut out the 11th-seeded Rebels (15-6) for seven innings.

“Whitley was great again,” Greene said. “She only made one mistake all night — walking that lead-off batter in the eighth.”

After that pivotal walk, Parkwood executed on a sacrifice bunt. Then the Rebels got a clutch hit from Cassidy Vance to drive in the run.

West left only four on base and didn’t have many scoring opportunities.

“We had a baserunner picked off and we hit into two double plays on hard-hit balls, and things like that don’t usually happen to us,” Greene said.  “To win a game like this, you really need one good break, and we didn’t catch one all night.”

The game ended on a line drive to third base by Sproul. Greene said the ball was dropped and hit the ground. Sproul would’ve been safe at first. The plate umpire asked for help, but after conferring with his partner, his initial ruling that the ball had been caught in the air stood.

“Just one of those nights,” Greene said. “But as I much hated to lose tonight, this was a fantastic season, the best season I’ve had at West. It was a lot of fun. We had a team that liked to goof off at times, but when it was time to play a game, they always were focused and serious.”

Parkwood, seeded 11th, will play at second-seeded Central Cabarrus in the fourth round.