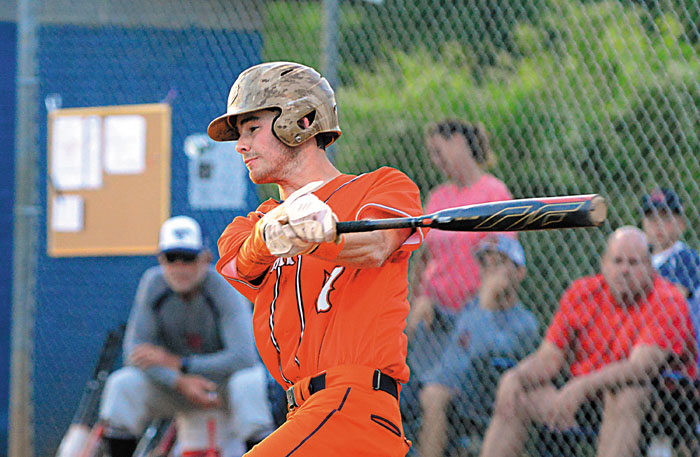 The Carson right-hander found himself working too quickly as the top-seeded Cougars opened their third-round 3A state playoff showdown with visiting Southwest Guilford. Then came a first-inning mound visit by pitching coach Brett Mulkey — and it likely made all the difference in a 3-1 victory.

“I don’t know. I was a little nervous I guess,” Hales said, moments after Carson (26-2) advanced to Friday’s fourth-round matchup with North Gaston. “I never let stuff like that get to me, not like tonight, anyway. Mulkey came out and said I was rushing everything. Everything was coming out before my arm was. I just needed to slow down and relax.”

Hales walked three of the first four SWG batters he faced, then yielded a sacrifice fly to No. 5 hitter Joe Specht. It put Carson behind for the first time in the playoffs.

“I think what defines this team is what happened in the first inning,” said winning coach Chris Cauble. “When we had the really bad inning, nobody put their heads down. Everyone kept playing and we only gave up one run. It could have been a lot worse.”

Southwest coach Reid Holmes agreed after the eighth-seeded Cowboys closed the season with a 20-8 record.

“We knew we were in for a dogfight,” he said. “That’s what made that first inning a win-win for Carson. Holding us to one run was a huge boost to them.”

Hales escaped by retiring Southwest Guilford’s Luke Johnson on a fly ball to right field. He recomposed to retire the next 13 batters he faced, finished with a complete-game two-hitter and won his 10th game, something that didn’t surprise Carson catcher Garrett Alewine.

“It takes time to settle in sometimes,” the senior backstop said. “Some days it takes a little longer to find a rhythm. Tonight, the end result speaks for itself.”

Cauble was cool with that. “Hoping that Cole would just quit rushing and find the strike zone,” he said. “But he manned up and found a way to get out of it with just one run. That’s what kept us in the ballgame.”

Alewine delivered the game’s loudest swing in the last of the fourth. Facing tall right-hander Jacob Shafer — a six-game winner with a sparkling 2.07 ERA before the first pitch — he lined a two-out, two-run double that sailed over the head of right-fielder Eli Mills and put the Cougars ahead, 2-1.

“One play doesn’t beat us,” said Holmes. “But that was uncharacteristic of us. We’ve been sound defensively all year.”

Alewine roped a 2-2 pitch that certainly appeared catchable, but Mills may have lost the ball in the sun’s glare. “It felt good off the bat,” Alewine said. “More or less, with two strikes you’re trying to protect. I wasn’t really trying to hit a double, but I’m happy with the result.”

Hales threw no-hit ball until Shafer reached on an infield hit with two away in the top of the fifth. An inning later Mills lobbed a two-out single into right field and quickly stole second base. Teammate Joe Specht followed with a smash ground ball to second-baseman Aaron Misenheimer, who juggled the ball before throwing low past first-baseman Logan Rogers.

“I was hoping (Misenheimer) would hold it, but he made a low throw to first,” Cauble said. “Fortunately Logan hustled after it and made a strong throw back to the infield.”

Rogers fired a strike to third-baseman Ryan Street, who relayed a bullet to Alewine at the plate to retire Mills, preserving Carson’s one-run lead. The Cougars added an insurance run in the last of the sixth when Rogers reached second base on a leadoff error, advanced on a groundout and scored when DH Jake Harris bunted for a two-out base hit.

“It was a drag (bunt), but it looked like a squeeze,” Harris smiled. “Cauble gave me the sign to drag. I just wanted to beat it out because I wanted that run to count.”

It provided breathing room for Hales, who retired the side in order in the Southwest seventh. He finished with eight strikeouts — and only three walks.

“It feels great to win and move on,” said Harris. “We’d like it to be less stressful, but any way you win is a win.”

Even if you have to slow down to get there.

NOTES: Hales improved to 10-1 and lowered his ERA to 1.21. … Carson will carry a five-game winning streak into Friday’s fourth-round game with 12th-seeded North Gaston (22-5). The Wildcats advanced with a 9-5 decision over West Henderson, their third straight victory and sixth in seven games. Cauble said senior Deacon Wike (8-1, 1.47 ERA) will start for the Cougars, winners of 15 of their last 16.