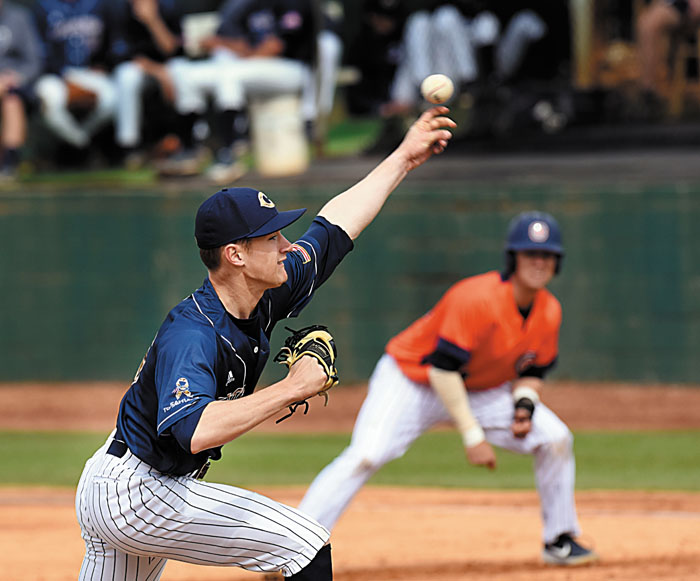 “Well, Ketchie can pitch,” Gantt said. “He can throw the ball where he wants it to go.”

That sounds easy enough, although few can do it consistently. Ketchie, who is 8-1 as Catawba heads into regional play, has both control (he throws strikes) and command (he can locate those pitches — in or out, up or down).

“If you know where a batter usually hits it and you know Ketchie is going to hit his spot, you’ve got a pretty good idea where to position your fielders,” Gantt said.

Ketchie is not a strikeout pitcher (59 in 84 innings), but he’s only walked 14 batters. If Ketchie walks a batter, it’s probably because he didn’t mind walking him because he preferred to pitch to the next guy. Ketchie was a low-80s velocity guy when he came to Catawba, but he’s an upper-80s guy now. Still, the key for him is always going to be location.

A second team All-South Atlantic Conference selection, he bloomed later than most college standouts, but he was 11-5 in his two seasons of varsity baseball at West Rowan. He was 16-3, including a World Series victory, for Rowan County American Legion.

The first serious adversity he’d experienced as a hurler came at Catawba. He had a fine won/lost record as a freshman (7-2), but he allowed 16 homers and his ERA soared to 7.02. One of the highlights of Ketchie’s freshman season was pitching into the seventh inning of a regional victory against Mount Olive.

“My record was pretty good, but the ERA went through the roof,” Ketchie said.

Catawba’s Newman Park is a wonderful venue for Legion baseball, but with a center field wall that’s 360 feet away, it’s too cozy for college hitters, who are older, bigger, stronger and smarter than their Legion counterparts. Ketchie got pounded in no-decisions several times  as a sophomore. He went 1-1 with a 6.75 ERA. Gantt didn’t call a press conference to announce Ketchie wouldn’t be starting any more games, but he didn’t have to. He just didn’t hand him the ball very often.

Ketchie turned things around in an odd place — New England. He regained his confidence there last summer playing in the Futures Collegiate Baseball League. Pitching in larger parks and throwing to hitters swinging wood bats, Ketchie didn’t just survive, he dominated. He went 5-0 and pitched in the league’s all-star game.

“The summer I had was huge,” Ketchie said. “It carried over to the fall.”

Gantt had never stopped believing Ketchie could be successful in college, and he saw the old Ketchie during Catawba’s fall scrimmages. Before this season started on Feb. 1, Gantt stated Ketchie would be counted on as one of Catawba’s primary starters.

He did pretty well in the early weeks. The breakout for him was the home game with Shippensburg on Feb. 16. Ketchie pitched a complete game in a 7-1 victory — a nine-inning complete game — and that’s something that just doesn’t happen much anymore.

Ketchie is physically more mature and stronger than he was when he was a high school player, but he’s still not a strapping guy. Nevertheless, he became Catawba’s workhorse as this season unfolded. He led the team in starts (14) as well as innings pitched.  His ERA this season is 3.33, second on the team behind closer Peyton Williams.

The low point of the season for the Indians was April 12-13 at Newberry when they dropped three straight to the South Atlantic Conference regular-season champion Wolves to fall into a tie for third place in the final standings. Ketchie pitched the first game of that series. He worked six innings, kept the ball in the park, walked only one batter, and gave Catawba a chance, but the Indians lost 4-2. Ketchie took a 2-1 led to the bottom of the sixth but allowed three runs. That was his only loss this season.

Redemption for the Indians came in the SAC tournament that began on April 26 in Kodak, Tenn.

Catawba used a committee of six pitchers, including standout relievers Riley Myers and Williams, to scrape by Tusculum 5-4 in its opening game.

Ketchie got the ball for Game 2 against second-seeded Lincoln Memorial, a team he had stymied in the regular season. He threw 122 pitches and registered his third complete game of the season and the fourth for the Indians. He allowed five hits, struck out six and walked one. Catawba, uncharacteristically, made three errors behind him, but he pitched like an ace with men on base. He won 8-0.

“I had my mind right and I got them to hit quite a few ground balls,” Ketchie said. “They also hit a couple of fly balls that might have been homers at Newman Park. Your first thought is, ‘Oh no, that’s a home run.’ But then it’s not.”

In the third inning, with the game still scoreless, Lincoln Memorial had the bases loaded with one out. Ketchie got a strikeout and got out of it.

In the fourth inning, the Railsplitters, trailing 1-0, loaded the bases with no outs. Ketchie got back-to-back strikeouts and got out of it.

“He’s unflappable, he doesn’t rattle, and his demeanor is one of his biggest assets,” Gantt said. “When Ketchie pitches, you can’t tell by looking at him, if we’re up 10 or down 10.”

Ketchie’s ironman effort went a long way toward winning the SAC tournament for Catawba and securing an automatic berth in the upcoming regional. The bullpen, the whole bullpen, got to rest on the day Ketchie threw his shutout.

Catawba beat Newberry on the third day of the tourney 2-0 with Hunter Shepherd, Myers and Williams pitching. That kept the Indians undefeated heading to the final day of the double-elimination event.

Newberry fought its way to another meeting with Catawba, but the Indians won 3-2 in the championship game with Sawyer Strickland, Myers and Williams on the mound.

“Ketchie came up to me on the day of the championship game and told me to put his name on the list of available pitchers,” Gantt said. “He wanted to pitch if we needed him.”

Ketchie wasn’t kidding. He was prepared to pitch.

“I actually felt pretty good that day, so I could have pitched,” he said. “I was willing to do whatever it took to get back in the regional. It was tough not going last year.”

Catawba celebrated winning the SAC tournament back on April 29, so it’s been a long layoff for the baseball team. Seniors graduated on Saturday.

“We’ve still been lifting three days a week,” Ketchie said. “And we still practice every day to stay sharp, but those practices usually are short and sweet.”

Southeast Regional pairings finally were announced on Sunday night, a few hours after the Peach Belt Conference Tournament was decided.

The D-II format is dramatically different this season, with the six teams that made the Southeast Regional playing in double-elimination sub-regionals hosted by the top two seeds on May 16-18. The survivors of those sub-regionals will tangle in a best-of-three super regional series on May 24-25.

Then the eight regional winners will advance to Cary for the D-II Championships to be held from June 1-8.

Seeded third, Catawba (42-12) will be playing in the sub-regional hosted by No. 2 seed Newberry. Catawba’s first-round opponent will be No. 6 seed Young Harris (35-19), the Georgia school that just won the Peach Belt tourney for the first time.

Three of Young Harris’ top six hitters are lefties, so Catawba is likely to pitch one of its southpaws — Ketchie or Shepherd — in the opening game. The two big power bats for Young Harris are right-handed — 6-foot-5 DH Zavier Lushington, who has 11 homers and a .357 batting average, and first baseman Dahlton Cash, who launched two homers in Sunday’s championship game.

Gantt hasn’t announced rotation decisions yet. Ketchie will be ready when he’s called on.

“It’s not like I have a whole lot of conversations with Ketchie,” Gantt said with a laugh. “He’s one of those guys that coaches don’t have to tell him what do to. He knows what he’s supposed to do, and he does it.”

High school playoffs: A look at Round 3