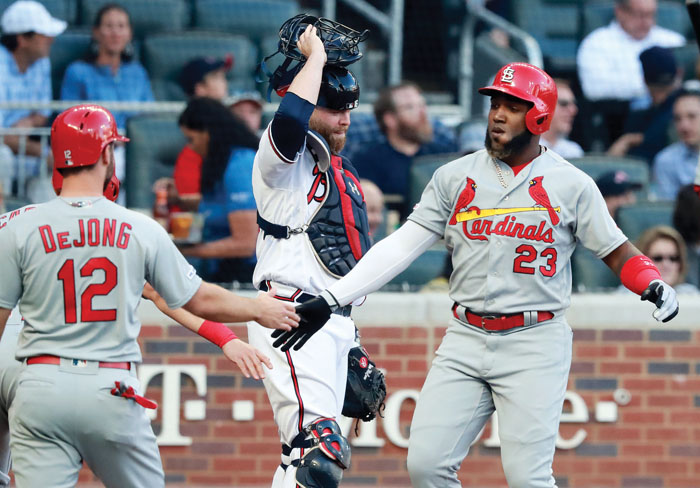 Jack Flaherty (4-3) did not allow a hit through four innings. St. Louis led 11-0 before Flaherty gave up three runs and three hits in the fifth.

The 2019 struggles for Foltynewicz (0-3) continued. He gave up eight runs, matching his career high, while lasting only 4 2/3 innings.

Foltynewicz, a 2018 All-Star, saw his ERA climb to 8.02 in four starts. He began the season on the injured list with a bone spur in his right elbow.

Ozuna’s homer gave the Cardinals a 3-0 lead in the first. Dexter Fowler led off the fourth with a homer to right, and Molina’s shot knocked Foltynewicz out of the game and was the big hit in a six-run fifth.

Wong added to the lead with his three-run homer off Jonny Venters in the ninth.

Atlanta’s first hit off Flaherty in the fifth was Brian McCann’s broken-bat dribbler against the defensive shift toward an abandoned third base. McCann scored on pinch-hitter Charlie Culberson’s single to left. Ronald Acuña Jr. drew a bases-loaded walk off Flaherty to force in a run.

The Cardinals were shut out in each of Flaherty’s last two starts. Bolstered by the big offensive support against the Braves, Flaherty allowed three runs on three hits in six innings despite matching his career high with five walks. He had six strikeouts.

St. Louis outhit the Braves 14-3. Every Cardinals starter, including Flaherty, had at least one hit.

Atlanta left-hander Jesse Biddle, activated off the injured list before the game, replaced Foltynewicz in the fifth and gave up four straight hits and a walk. Flaherty’s single drove in Fowler and Matt Carpenter’s double to the left field wall drove in Flaherty. Biddle’s wild pitch allowed another run.

WASHINGTON (AP) — Wilson Ramos hit a first-inning grand slam after Washington failed to complete what should have been a routine double play, Noah Syndergaard took a no-hitter into the sixth, and the New York Mets beat the slumping Nationals 6-2 Tuesday night.

The Mets have won three games in a row. The Nationals, meanwhile, lost for the 11th time in 15 games, fell to 2-12 in series openers and are 16-25 overall. In the NL, only the starting-from-scratch Miami Marlins have a worse record.

Syndergaard (3-3) allowed two runs and four hits in eight innings, lowering his ERA to 4.74. The first hit he allowed was a single to right by Wilmer Difo to open the sixth, and Victor Robles followed with a homer off a 98 mph fastball.

It was Robles’ seventh homer of the season — and third off Syndergaard.

Other than that two-batter hiccup, the 6-foot-6, 240-pound Syndergaard lived up to his “Thor” nickname, repeatedly reaching 99 mph on his 102-pitch evening and striking out six.

Ramos, who used to play for the Nationals, connected with a low 80 mph offering from Jeremy Hellickson (2-2) and sent it out to left for his second homer.

He never should have been at the plate in that spot: With a man on first and one out, Robinson Cano hit a grounder that appeared to get Hellickson out of the inning. But backup shortstop Difo’s relay throw was off the mark and forced fourth-string first baseman Gerardo Parra to stretch to try to make the grab. Parra managed to get his glove on the ball but couldn’t hold on.

Cano initially was called out, but that was overturned after a review.

Pete Alonso followed with a single past Difo, and Michael Conforto walked to load the bases, bringing Ramos to the plate.

Dominic Smith, pinch-hitting for Syndergaard in the ninth, hit his first homer of the year.

Mets: INF Jed Lowrie strained his hamstring while in the minors to work his way back from an injured left knee and will head back to Florida. The 35-year-old Lowrie will be reassessed in a couple of weeks. He signed a $20 million, two-year contract as a free agent this offseason but felt pain in his left knee early in spring training and began the season on the injured list. … LHP Jason Vargas (left hamstring) was scheduled to throw a bullpen session; LHP Steven Matz (left forearm) planned to play catch. Both are eligible to come off the IL this week.

Nationals: SS Trea Turner, out since April 3 with a broken finger, began his rehab assignment at Class A Potomac. … 1B Ryan Zimmerman (right foot) participated in infield practice; he went on the IL on April 28.

Nationals: LHP Patrick Corbin (3-1, 3.20 ERA) makes his third start against the Mets this season. Corbin has a 3.75 ERA with 13 strikeouts, three walks and three homers allowed in 12 innings against New York. He doesn’t have a decision from either of those games; the teams split them.