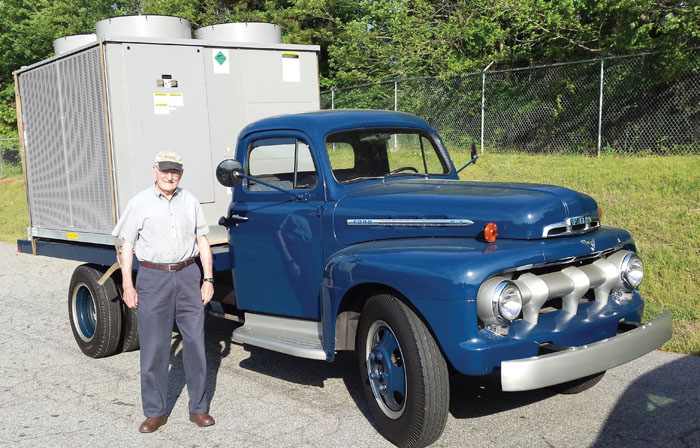 Clarence Beaver Jr. worked at Beaver Brothers Inc. until his death in 2015. Here, in 2014, he stands with the company's cherished 1951 Ford truck, which also was still hard at work. Photo courtesy of Beaver Brothers

1. Bike enthusiasts showed up in force at a town board meeting last week to show their support for a pump track and trails on property owned by what municipality?
A. Granite Quarry
B. China Grove
C. Cleveland
D. Rockwell

3. Scores of folks in western Rowan County have been coming together in recent months to build something that should be completed by this fall. What is this project, depending on the work of many in the community?
A. A new West Rowan Volunteer Fire Department station
B. A new park on a former dairy farm, which has been donated to the Corriher Grange
C. A barn quilt mural
D. The digging of a lake at Sloan Park that will be filled by natural springs

4. Rowan County native and East Rowan High School graduate Alex Yost, 29, starred in sell-out performances this month at the Temple Theatre in Sanford. He played the role of Danny Zuko in what production?
A. “West Side Story”
B. “Grease”
C. “Jersey Boys”
D. “Death of a Salesman”

5. Beaver Brothers Inc. of Salisbury is celebrating its 100th year in business. What line of work is the company in?
A. Mattress-making
B. Car sales and service
C. Sheet metal fabrication
D. Heating and air conditioning

6. Spencer Town Manager Terence Arrington resigned amid some disagreements with the town board, and questions remain about whether he will be entitled to any severance pay and compensation for vacation, holidays and other accrued benefits. How long in his three-year contract did Arrignton work for Spencer?
A. Three months
B. Six months
C. 16 months
D. 25 months

7. As the Rowan County Rescue Squad’s future and a possible reorganization are discussed, who remains as the rescue squad’s interim chief, at least through June 30?
A. Eddie Cress
B. Chris Soliz
C. Bill Feather
D. Mike Caskey

9. A monument that will be unveiled this week was installed on the grounds of the Rowan County Courthouse. What is this monument for?
A. The Ten Commandments
B. To showcase the words “In God We Trust”
C. A tribute to district attorneys
D. A memorial for law enforcement officers in Rowan who died in the line of duty

10. Livingstone College has established a study-abroad program giving business students opportunities to study as sophomores and juniors in what country?
A. South Korea
B. The Netherlands
C. India
D. Egypt