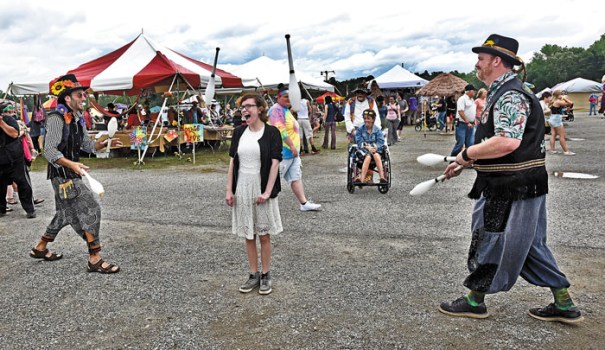 Kyle Brown and Ken Julian juggle over the young lady's head at the Hippie Fest. They are with a group called Gravity Check from Morganton. photo by Wayne Hinshaw, for the Salisbury Post 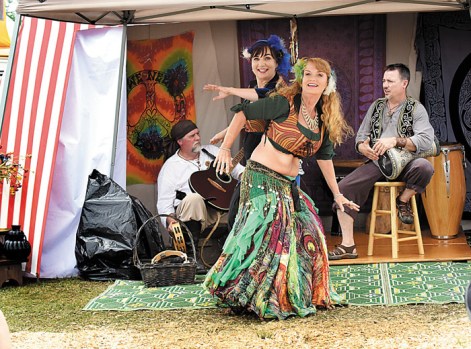 Lee Ann Evans in back, and Jannie Farrell dances with the Treux Spice Road group with dancers and music for the crowd. photo by Wayne Hinshaw, for the Salisbury Post 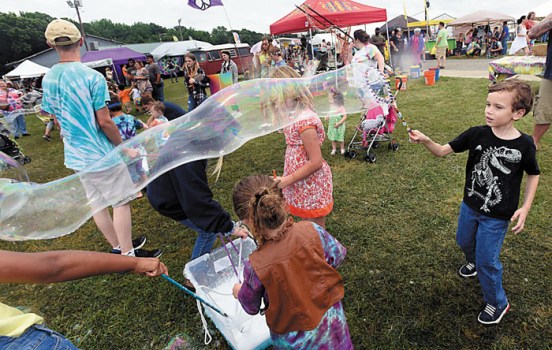 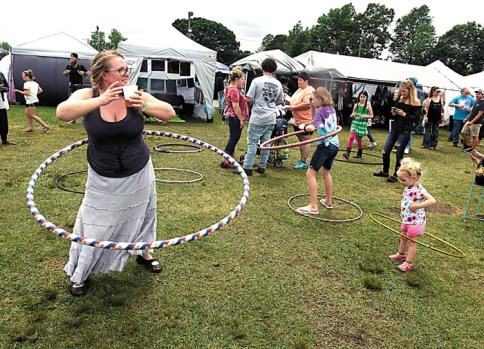 Valerie Boler from Greensboro keeps the hula hoop going as her 3 year old daughter Colette on the right tries the hoop. photo by Wayne Hinshaw, for the Salisbury Post 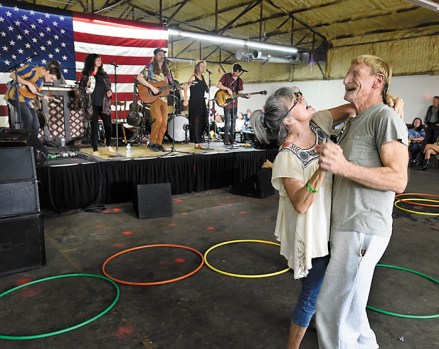 Al Sides and his partner Robin Mercer were having a dream dance in front of the band "The Hunts" at the Hippie Fest. Sides said that they just met today. photo by Wayne Hinshaw, for the Salisbury Post

SALISBURY — Tie-dye-clad celebrants didn’t let the weekend’s rain ruin their blast from the past at Hippie Fest at the Rowan County Fairgrounds.

Festival-goers were greeted by stilt walkers, a juggling duo and a do-it-yourself tie-dye stand. Kids could be overwhelmed by bubbles, families could enjoy cotton candy and friends could walk through dozens of vendor booths to buy jewelry.

Kyle Brown and Ken Julian brought excitement as jugglers with Gravity Check Juggling, having people stand between them while they passed six pins to each other.

“We really try to connect and get involved to get a little moment,” Julian said. “That’s important to us.”

Julian said they moved locations throughout the park to talk to vendors and take in Hippie Fest, what he calls “a big costume party.”

Click here to view more photos from the event.

Hippie Fest also showcased multiple Volkswagen vans and cars where fans could pose for a photo and talk to the owners. BJ and Carol Braden showed off their 1967 Volkswagen van that they have been living out of for nine years as they travel around.

BJ Braden said people came up to reminiscence about the 1960s. Living out of a van takes him back to when he was a kid.

The van was decorated with a “free hugs” sticker. Writing on the back window showed their destination as “PA or bust.” Inside was a bed, suitcases, their dog and an old Scooby-Doo lunchbox.

Braden said the model of his van is unique in that it has a split windshield. Braden said one man came up to him and said he had spent an hour at Hippie Fest looking for a split-windshield Volkswagen.

Brandy Griffin said she enjoyed seeing all the Volkswagens. She came with her husband, Zack, and her kids to celebrate her son’s birthday.

Friends Alyssia Ruggiero, of Boone, and Erica Raiti, of Granite Quarry, also made it a family affair. While their kids went to get a henna tattoo and eat a snow cone, they people-watched.

Vendor Nancy Weed, of Swirly Baby, sold tie-dyed items made from 100 percent cotton, old-school flour sacks. She said the festival was great for her with a lot going on and selling a lot of clothes.

The atmosphere was fun and happy, Weed said.

She said this was the first hippie Fest she’s attended. She brought her granddaughter, who enjoyed playing with the bubbles.

Despite heavy rain on Saturday and some drizzle on Sunday, the festival went on.

Vendor Annie Whitestone, of Salisbury, said as it rained heavily on Saturday, festival-goers still were enthusiastic. She said some took their shoes off and kept up their good spirits.

Like Weed, Whitestone felt people were receptive to her product, hand-twisted cord and leather bracelets.

Hippie Fest will continue on to Kalamazoo, Michigan, on June 1.