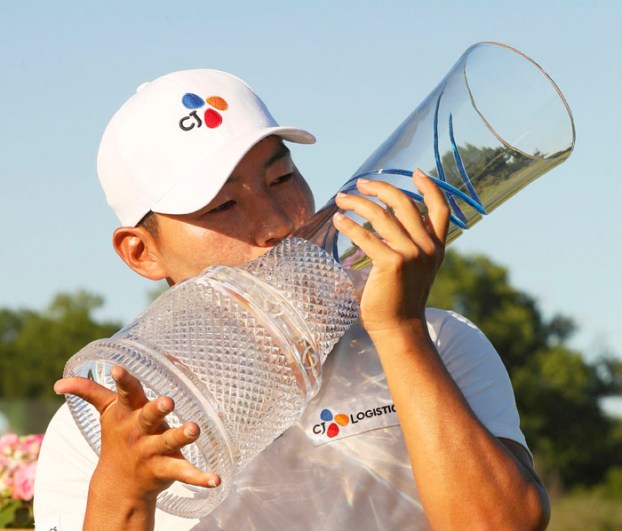 DALLAS (AP) — Sung Kang was a teenager when his father started sending him from South Korea to North Texas in the winters and summers to work on his golf game.
The 31-year-old Kang, who now lives in the area while playing on the PGA Tour, got to call his father Sunday to tell him, “I did it,” after his getting his first victory in his 159th career start.
Kang closed the Byron Nelson with a 4-under 67 to finish at 23 under and beat Matt Every and Scott Piercy by two strokes.
With three consecutive birdies late, including a 23-footer on the 15th hole, Kang finally regained the lead for good on a 27-hole Mother’s Day Sunday at Trinity Forest — about 30 minutes from his home in Coppell, where he has lived since his PGA Tour debut in 2011.
“It just feels amazing. I was thinking about winning on the PGA Tour when I was real young and watching Tiger dominating,” Kang said. “My dad gave me a lot of support when I was young.”
Kang pumped his fist when the birdie dropped in at No. 15, making for a two-stroke swing. Every, who started that 431-yard par 4 tied for the lead, was in the middle of the fairway before what he called “just a terrible shot” on his approach that set up a three-putt for bogey.
“I watched him for 72 holes. He didn’t miss. Hard to beat,” Every said.
Every finished with a 66. Piercy, also in the final threesome, ended a bogey-free tournament with a 64.
Twice over the last two days, Every overcame deficits of at least four strokes and went ahead of Kang. They played together all four rounds.
“First two rounds, we’re not playing to win. We’re just making birdies back and forth, and back and forth. Just getting great momentum,” said Kang, who matched the course record with a 61 in the second round Friday. “Then Saturday and Sunday, it’s going. … He played great on the front nine. I played great on the back nine.”
Brooks Koepka, the world’s No. 3-ranked player who now goes to Bethpage to defend his PGA Championship title, finished fourth at the Nelson at 20 under after a 68.
“Sometimes you just get beat. That happened this week,” Koepka said. “Played good. I like my chances next week. I feel like I’m striking it well, putting it really well. … It was important going into next week.”
Koepka has also won the last two U.S. Opens since his last previous appearance at the Nelson, in 2017 when the tournament was last played TPC Four Seasons.
Jordan Spieth, a member at the links-style course south of downtown Dallas, shot a 71 to tie for 29th at 11 under. His best Nelson finish is still a tie for 16th in 2010 when he played in the tournament for the first time as a 16-year-old amateur on a sponsor exemption.
Spieth is still without a top-20 finish in his 13 starts this season. He last won at the 2017 British Open, his third major victory.
“I putted really well this week, drove the ball a little better,” Spieth said. “Just trying to tighten everything up a little bit. Today’s round wasn’t great, but overall pretty solid week.”
Every and Kang had an extended day on the course Sunday after the third round was delayed six hours by rain and they got in only nine holes before play was suspended by darkness.
Kang started the third round with a four-stroke lead, but trailed Every by one when play was stopped midway through that round Saturday night. When they resumed Sunday morning, Kang regained the lead with three birdies on the back nine, while Every had four consecutive bogeys.
A third-round 68 put Kang at 19 under, three strokes ahead of Every (67) going into the fourth round.
Every, whose only two PGA Tour wins were back-to-back Arnold Palmer Invitational titles in 2014 and 2015, started the final round with three consecutive birdies and was tied for the lead because Kang bogeyed the par-3 second hole.
Five birdies and a bogey on the first six holes got Every to 20 under, and a stroke ahead when he rebounded from that bogey at No. 4 with consecutive birdies.
Kang also had three consecutive birdies in the middle of the round to go back ahead before his tee shot at the par-3 12th hole missed the green. His ball settled in some nasty rough well below the hole, and his shot from there got to the top of the hill before rolling back into a bunker.
“I was mentally really tired, especially on the back nine,” Kang said. “I was telling my caddie I’m really tired. I told him, just keep telling me about the funny things and that I can laugh and forget about the golf for a while. As soon as we get to the ball, just concentrate again.”
The bogey at 12 put him at 21 under, tied again with Every at the same time Koepka made a short birdie putt at No. 13 to get him within two strokes of the lead, though he had only one more birdie after that. He was 4 under in his first five holes with a 36-foot eagle putt after driving the green at the 301-yard par-4 fifth hole, but then had seven consecutive pars.

BOSTON (AP) — With a five-goal, third-period lead and the Bruins still not done scoring, the crowd in the new... read more