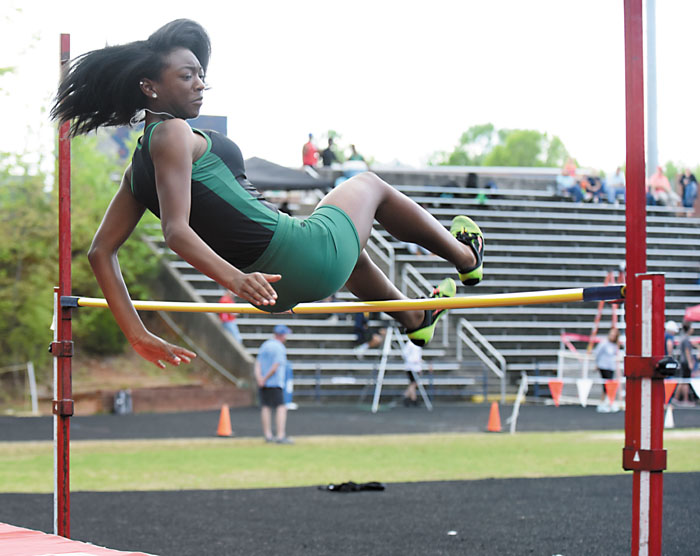 SPENCER —North Rowan’s powerful tradition in girls track and field remains alive thanks to one 5-foot-7 senior with long legs and a big heart.

Girls track at the 1A school now relies almost totally on hurdler/jumper La’Kayla Birst, who signed with Fayetteville State on Thursday.

Just three short years ago during Birst’s freshman year, North won the Rowan County Championships for coach Phillip Bush with elite athletes such as Payton Russell and Brianna White. However, numbers and interest have dwindled.

“Track is a sport where you have to put in a lot of time and a lot of effort,” Birst said. “We have girls who can be good next year if they put in the effort.”

North scored only 14 points in this year’s Rowan County Championships. That was all Birst. She took second in the 300 hurdles for eight points, and third in the high jump for six more.

In the Yadkin Valley Conference Championships at South Davidson, it was more of the same. North scored 18 points. Birst won the high jump for 10 and placed second in the 300 hurdles for eight.

On Friday, Birst represented North’s girls in the 1A Midwest Regional hosted by Davie County. She placed second in the high jump and took third in the 300 hurdles (50.42 seconds), qualifying for the state meet in both of her events. Her final high school competition will be in the 1A State Championships at North Carolina A&T on Saturday, May 18.

That will be a good way to go out.

The track journey has been a long and winding one for Birst.

“She got me interested in the high jump and hurdles,” Birst said. “When Coach Bush started taking an interest in me when I was in the eighth grade, I started to see that track might take me further than any other sport. I decided to stick with track.”

As a freshman, Birst burst on the scene. She made a splash. She helped North win the 2A Central Carolina Conference as well as the county championship. The Cavaliers placed third in the state that year.

In the winter of 2017, as a sophomore, Birst qualifed for the indoor state meet and cleared a career-best 5-feet-2 inches in the high jump for fifth place. That spring she won the county championship in the high jump and ran a leg on North’s winning 4×400 team.

“I’d given up hurdling then,” Birst said. “I was convinced that I just couldn’t do it, and I quit. But later, I came back to it.”

The hurdles, especially the longer hurdling event, the 300 meters, have been good to Birst  since her comeback. As a junior she was a double county champion in the high jump and 300 hurdles.

Birst hit a plateau in the high jump at 5-2, but Bush, her former coach who attended Thursday’s signing, expects her to soar past that barrier at Fayetteville State with consistent training.

“She has a lot of talent and she will work hard,” Bush said. “She’s capable of big things in college. She just has to set her mind to it.”

Fayetteville State didn’t have a women’s track program for many years, but when the Broncos decided to revive the program for the 2017-18 school year, they hired Inez Turner, who had been the coach at Winston-Salem State.

Turner has been recruiting Birst for quite a while. Robert Steele, the Hall of Fame coach who guided North Rowan to statewide and national prominence during its heyday in track and field, recommended Birst. That was good enough for Turner.

Fayetteville State is rising quickly as a women’s track power in the CIAA. The Broncos placed a close second  behind Winston-Salem State in the recent CIAA Championships.

“There’s a lot of good energy at Fayetteville State,” Birst said. “I’m excited about getting a chance.”

She plans to major in sports medicine.