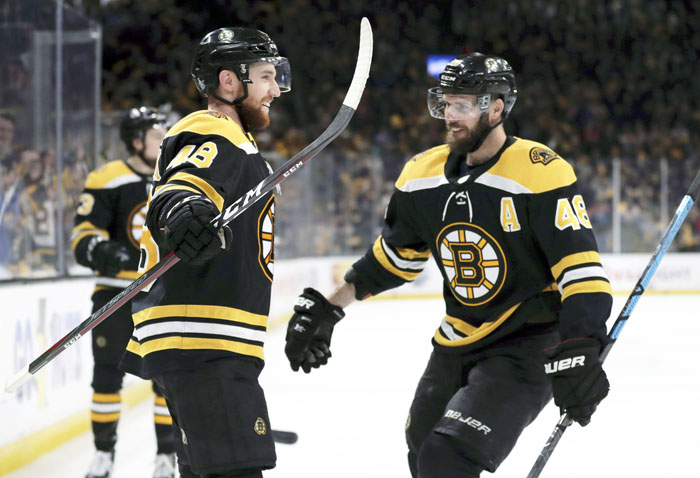 BOSTON (AP) — With a five-goal, third-period lead and the Bruins still not done scoring, the crowd in the new Boston Garden began a throaty chant of “We want the Cup!”
The next time they see their team, the NHL’s championship trophy might be on the line for real.
Matt Grzelcyk scored twice — his first career multigoal game — and Tuukka Rask made 21 saves to lead the Bruins to a 6-2 victory over the Carolina Hurricanes on Sunday and give Boston a 2-0 lead in the Eastern Conference finals.
Connor Clifton had his first career NHL goal — the 19th Bruins player to score this postseason, tying a franchise record. Jake DeBrusk, David Backes and Danton Heinen also connected, and Torey Krug and Charlie Coyle had three assists apiece.
“It does feel contagious,” said Boston coach Bruce Cassidy, whose team won its fifth straight game and needs two more victories to reach the Stanley Cup Final for the third time in nine seasons. “Everybody’s contributing.”
The series moves to Carolina for Games 3 and 4 on Tuesday and Thursday nights. The Hurricanes need to win at least one to force a fifth game back in Boston on Saturday night.
“Sometimes you’ve got to eat a poop sandwich. It doesn’t taste good and you have to chew on it for a little bit,” Hurricanes captain Justin Williams said. “We’ll have to do it for a couple days and get the taste out of our mouth next game.”
The Bruins won 5-2 in Game 1, but the Hurricanes led early in the third period and it was still 3-2 with 4 minutes to play.
This one wasn’t ever close.
Petr Mrazek stopped just 19 shots, and Boston led 6-0 before Williams and Teuvo Teravainen scored in the last nine minutes to deprive Rask of a seventh career postseason shutout.
“The other night wasn’t as bad. We were right in the game,” said Carolina coach Rod Brind’Amour, whose team also fell behind 0-2 against the Washington Capitals in the first round before eliminating the defending champions in seven. “They’re playing their game; we haven’t gotten to ours.”
Nearly a half century after Bobby Orr soared through the air on Mother’s Day to finish off the 1970 Stanley Cup, the Hall of Famer was in the building as a pregame hype man known as the banner captain. The crowd gave him a standing ovation, and the team responded as well.
Grzelcyk and DeBrusk scored late in the first, and Clifton made it 3-0 early in the second. With two minutes left in the middle period and Boston back on the power play, Heinen took a long pass out of the Boston zone from Marcus Johansson and drew two defenders with him before sliding it into the slot.
Grzelcyk slipped the puck over to his backhand and beat Mrazek to make it 4-0.
“That was the cooker,” Brind’Amour said. “We needed an answer and we didn’t have one.”
Backes scored 1:10 into the third period, leaving Mrazek looking over to the bench to see if he would be replaced. Brind’Amour said Mrazek, who returned from an injury for Game 1 after Curtis McElhinney started the last two games of the East semifinals, had earned the right to stay in if that’s what he wanted to do.
“We talked about it, but he doesn’t want to come out. He’s a battler,” Brind’Amour said. “A lot of other guys on the bench deserve to some out, if that’s how were doing it.”
Heinen finished on a feed from Patrice Bergeron to give Boston a six-goal lead with 15 minutes left before Williams got Carolina on the scoreboard.
Notes: Duke coach Mike Krzyzewski made a hype video for the Hurricanes. … Brad Marchand appeared in his 99th career playoff game. … Carolina’s Sebastian Aho was held without a goal for the first time in four games, leaving Bates Battaglia (2002) and Ray Sheppard (1999) the only players to score in four straight for the franchise. … Krug is the fifth Bruins defenseman with three or more assists in multiple playoff games. Orr and Ray Bourque did it five times apiece.
UP NEXT
Game 3 is Tuesday night in Raleigh, North Carolina.
___
More AP NHL: https://apnews.com/NHL and https://twitter.com/AP_Sports