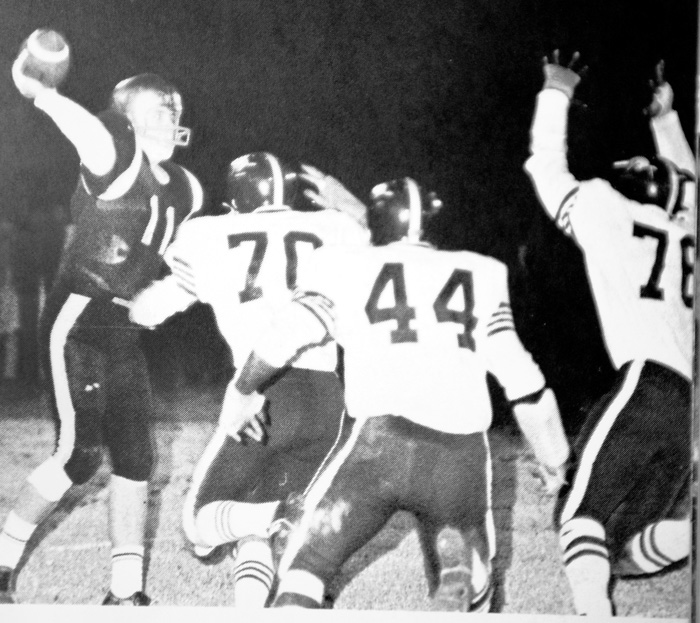 He was, by all accounts, an inspiring, upbeat, outgoing man.

As a high school football player, he provided memories for anyone who played with or against him.

The capstone of Lowe’s career came in his final game in an East Rowan uniform and on one of the biggest stages any Rowan school has ever played on.

They played it at Boyden High’s Ludwig Stadium, so more people could get in. Ludwig seated about 4,000, but some swear 6,500 were in attendance that night to watch East Rowan take on Shelby. The date was Nov. 28, 1969. At stake was the championship of the Western North Carolina High School Activities Association, an organization that dominated area high school sports for many years, but dissolved in June 1977.  Its members moved on to join the NCHSAA.

While East Rowan and Shelby weren’t members of the state association, this was the ultimate game, as far as these teams could go. For everyone who played in it, coached in it, or just watched it, this was a state championship game.

This was uncharted waters for one of the consolidated Rowan schools. East making a run in 1969 was headline-making stuff.

The new schools didn’t experience consistent football success initially. From 1959-67, East Rowan went 43-43-3, and the Mustangs still had a significantly better record than North, South or West Rowan at that point.

When coach W.A. Cline’s 1968 Mustangs, reinforced by black players such as Lowe and Jerry Sifford, as integration gained momentum in Rowan, won the North Piedmont Conference championship over programs such as Mooresville, North Davidson and Davie County, it was shocking.

Then came 1969. Cline’s team went 10-0 in the regular season. East had the legendary passing combination of C.M. Yates and Johnny Yarbrough, of course, but it also had a stout running game that could control the ball and one of the stingiest defenses the county has ever seen. Teams were rushing for minus yardage against the Mustangs.

Lowe, East’s largest defensive starter at 200 pounds, was a terror at tackle. At crunch time, he could also step in on the offensive line.

“You couldn’t run away from Willie,” Yates said. “He’d just run you down.”

The NPC was an odd, nine-team league with two divisions in 1969. East won the five-team division, while North Rowan edged Mooresville to take the four-team division.

The East vs. North confrontation for the NPC title was hyped considerably. North had a fine back in Kenny Stoner and was explosive. That game also was played at Ludwig Stadium to accommodate the crowd. East won with stunning ease, 38-0.

The SPC, with programs such as Concord, A.L. Brown, Thomasville, Asheboro, Albemarle and Statesville usually beat the NPC  like a drum, and the SPC had recently added more power with Boyden and Lexington. From 1962-68, the SPC won every Bi-Conference championship game. Before 1969, the last time the NPC champ had beaten the SPC champ had been Mooresville’s 13-12 victory against Asheboro in 1961.

East was dramatically undersized compared to Concord, but survived that road game in thrilling fashion, 23-22, and became the first Rowan program to win a Bi-Conference championship.

Beating Concord was considered the greatest game in East history — for exactly one week.

Even playing the WNCHSAA championship in Salisbury, in East’s backyard, Shelby was favored. Shelby was the defending champion. Shelby was averaging 31.5 points per game and had blown away its two playoff opponents, 49-19 and 40-0.

Shelby had a talented player named Marcus Mauney. While he was used mostly as a swift running back, he also threw the ball like a quarterback and caught it like a wideout, which gave Shelby’s Golden Lions all sorts of offensive options. On kickoff and punt returns, Mauney could be devastating.

Cline spent sleepless nights leading up to the game. East had been able to deal with Concord’s outstanding backfield tandem of Martin Livingston and Tommy Jones a week earlier, but Cline knew Mauney would present an even greater threat.

Mauney proved to be as good as advertised.

Fortunately for the Mustangs, they had Lowe.

Lowe collided with Mauney early in the game, forcing a fumble.

Later on, Lowe would recover a Mauney fumble.

Then in the fourth quarter, with Shelby driving hard near the East 1-yard line, Lowe got in another lick on Mauney, and caused another fumble. Lowe’s teammate Danny Shepherd pounced on it.

The record book shows Mauney scored all three Shelby touchdowns and piled up 321 yards — 154 rushing, 102 on returns, 45 passing and 20 receiving.

No team in Rowan County would go undefeated for 40 years after that, not until coach Scott Young’s West Rowan squad ran the table with 16 straight wins in 2009.

Yates, who passed for 213 yards and accounted for three TDs was named MVP of the 1969 WNCHSAA title game, but he’d be the first to tell you that those turnovers created by Lowe and East’s defense made the difference.

“Willie was unbelievable, just so fast,” Yates said. “He was something. I remember a referee seeing him for the first time and coming over to our sideline and asking, ‘Who in the world is that guy?'”

As a junior in 1968, Lowe was All-Rowan County and All-North Piedmont Conference. In 1969, he repeated on the All-NPC team and was honored as Rowan County Defensive Player of the Year.

For his speed, for his toughness, for his leadership on one of the groundbreaking teams in county history, Lowe will always be remembered.