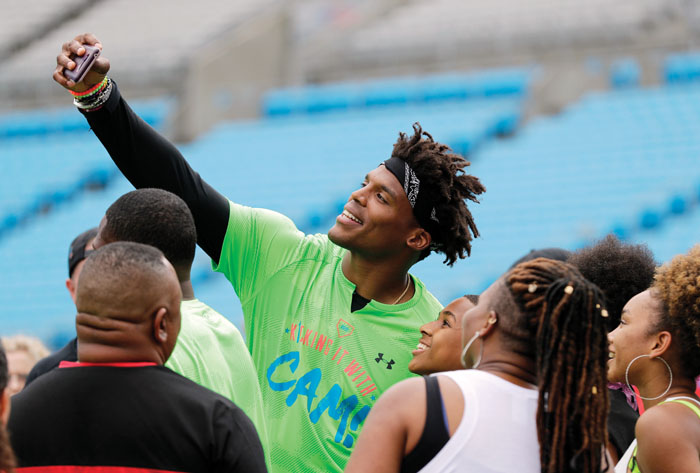 Sunday’s game would have been a homecoming for Cam Newton and a chance for the 2011 No. 1 draft pick to face his former team. But the Patriots cut him earlier this year. (Associated Press file photo)

CHARLOTTE (AP) — Rookie quarterback Will Grier got in his first work with the Carolina Panthers, while Cam Newton continued to be limited — even on the kickball field.

Grier, the team’s rookie third-round draft pick, threw for the first time with his new NFL team as the Panthers opened rookie minicamp on a practice field outside of Bank of America stadium.

Newton, who is coming off shoulder surgery, spent his day inside the stadium hosting his fifth annual “Kicking it with Cam” celebrity kickball tournament to benefit youth in the areas of education, diversity and inclusion, and wellness. In the past Newton has participated in the event, but he did not Friday.

“It’s all right, it’s getting there,” Newton said about his surgically repaired right shoulder.

Newton underwent an arthroscopic procedure on Jan. 24, but has not thrown a football yet. When asked if he knows when he will be cleared to throw, Newton shook his head no.

When Newton does return, he said he won’t change how he approaches the game, which means more running for the former No. 1 overall pick.

“I’m not changing. I’m too old to change,” Newton said on the eve of his 30th birthday. “But I can get better. That is one thing I can do. At this point the things that make me (who I am) are instilled and cemented in. It’s just up to me to take my game to the next level and get better.”

Instead of playing his normal role as a kickball pitcher, Newton mingled with some of celebrities on hand, including boxer Evander Holyfield — whose son, running back Elijah Holyfield, recently signed as an undrafted free agent — former NFL player Terrell Owens and several current Panthers teammates including Christian McCaffrey and Kawann Short. He also did some dancing , too.

Grier was hoping to attend the kickball event, too, but was a little busy learning his new job.

Grier, who grew up in the Charlotte area, was with Carolina’s other rookies going through two short practices and spending most of the day in the classroom with coaches learning plays.

He said his primary goal this weekend is to show coaches that he’s willing to work hard and that he’s coachable.

“I think that is important,” Grier said. “Just fitting into the system and doing whatever it takes to help the Panthers win.”

Newton said he is looking forward to helping Grier develop as a QB.

The Panthers selected Grier with the 100th overall pick two weeks ago with the idea that he could come in and backup Newton.

— and perhaps develop into a starting quarterback down the road.

Grier and Newton have met in the past.

When Grier took the practice field Friday, he was in a familiar place. Several years ago he led Davidson Day High School to a championship in a 7-on-7 football tournament sponsored by the Cam Newton Foundation.

He got to meet Newton at the time.

Now, as surreal as he said it feels, he’s in the same quarterback room with the 2015 league MVP playing in the NFL.

“I don’t remember if we took pictures,” Grier said recalling the 7-on-7 tournament. “But I remember Cam telling us to keep the energy up.”