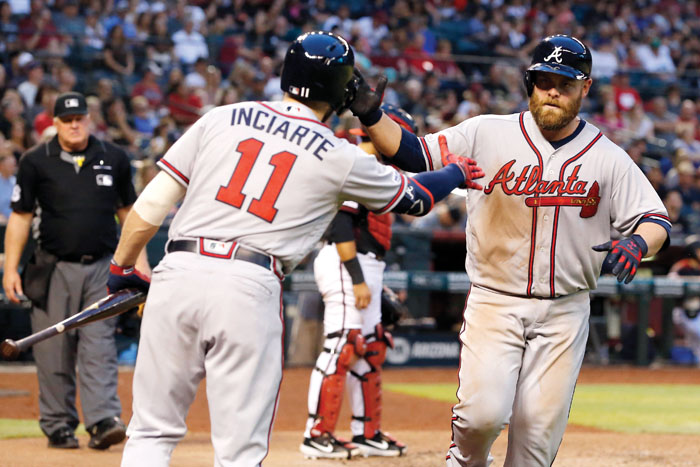 Atlanta Braves' Brian McCann, right, celebrates with Ender Inciarte (11) after hitting a solo home run against the Arizona Diamondbacks in the seventh inning during a baseball game, Saturday, May 11, 2019, in Phoenix. (AP Photo/Rick Scuteri)

By JACK MAGRUDER Associated Press
PHOENIX (AP) — Brian McCann homered over the swimming pool behind the right-field wall and Johan Camargo also went deep, helping the Atlanta Braves beat the Arizona Diamondbacks 6-4 Saturday night.
Kevin Gausman (2-3) gave up one run and five hits in six innings. He escaped a bases-loaded, one-out jam in the fourth when Nick Ahmed flied out and Alex Avila grounded out. When the Diamondbacks loaded the bases again with one out in the sixth, Ahmed hit a sacrifice fly that cut Atlanta’s lead to 2-1 and Avila struck out.
Recovered from a calf strain that caused a stint on the injured list, Jonny Venters retired his only batter, David Peralta, on a game-ending groundout for his first save
Arizona was 2 for 10 with runners in scoring position — neither hit drove in a run — and is 6 for 52 RISP in its last five games.
Merrill Kelly (3-4) allowed three runs and eight hits in seven innings.
Atlanta’s offense broke out after scoring 11 runs in its previous five games. The Braves had 13 hits.
Ender Inciarte beat a shift with a two-out, RBI single to left in the second.
Ronald Acuña Jr. opened the third with a 377-foot single off the left field fence, and Josh Donaldson hit an RBI single to double the lead.
McCann homered in the seventh inning, driving a curveball 419 feet, one pitch after sending a fastball just foul deep down the right-field line. Adam Jones pulled Arizona to 3-2 in the bottom half with his second career pinch-hit homer, a drive off Josh Tomlin.
Nick Markakis and Ozzie Albies singled in runs off Archie Bradley in the eighth, and Blake Swihart hit a two-run homer against Tomlin in the bottom half.
Camargo had a pinch homer off Yoshihisa Hirano in the ninth.
TRAINER’S ROOM
Braves: LHP Jesse Biddle (bruised right thigh, groin strain) has made three scoreless relief appearances for Triple-A Gwinnett, giving up one hit with five strikeouts in four innings.
Diamondbacks: RHP Taijuan Walker (recovering from Tommy John surgery in April 2018) is scheduled to throw another bullpen session Sunday after a 23-pitch bullpen Friday. If there are no setbacks, Walker could begin a minor league injury rehabilitation assignment next week. . Avila (strained left quadriceps) was activated from the injured list and started in his first game since April 5. . 1B/3B Jake Lamb (strained left quadriceps) has incorporated light running into other baseball activities but is unlikely to be activated during the current homestead that ends May 19.
UP NEXT
Braves: LHP Max Fried (4-2, 2.97 ERA) starts Sunday after his previous outing was cut short in the second inning when struck on the left hand by a line drive off the bat of the Los Angeles Dodgers’ Alex Verdugo.
Diamondbacks: RHP Zack Godley (1-2, 7.49 ERA) is expected to rejoin the starting rotation in the spot opened when RHP Taylor Clarke was optioned to Triple-A Reno on Tuesday. Godley pitched twice in relief at Tampa Bay, giving up three runs in four innings. He is expected to be on a 50-60 pitch limit.
___
More AP MLB: https://apnews.com/MLB and https://twitter.com/AP-Sports