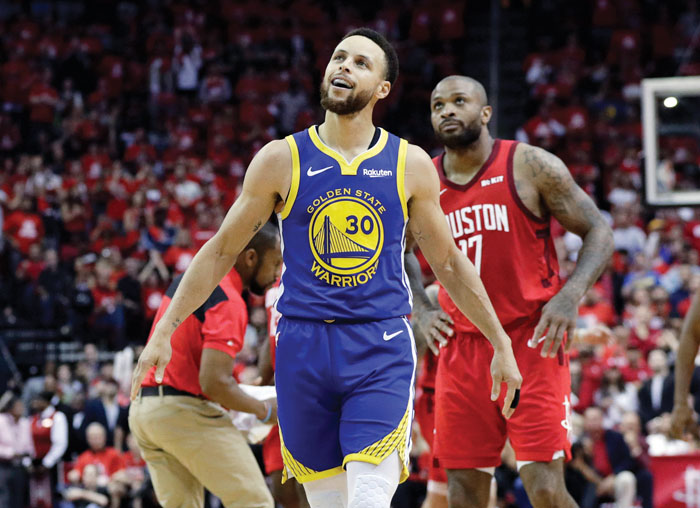 Golden State Warriors guard Stephen Curry (30) walks upcourt after a play during the second half in Game 6 of the team's second-round NBA basketball playoff series against the Houston Rockets, Friday, May 10, 2019, in Houston. Golden State won 118-113, winning the series. (AP Photo/Eric Gay)

HOUSTON (AP) — The Golden State Warriors still have plenty of work to do if they hope to win their third straight championship.

But after fending off the Houston Rockets on Friday night without leading playoff scorer Kevin Durant to advance to the Western Conference finals, they did take a moment to celebrate the accomplishment.

“It shows you how much respect we have for Houston,” coach Steve Kerr said. “We just finished the conference semifinals series. We’re only halfway home to where we want to be. And yet the celebration in there felt like a much bigger occasion and that’s because of the challenge that this team put before us.”

Stephen Curry scored all of his 33 points in the second half to lead the Warriors to a 118-113 win.

Klay Thompson added 27 points to help two-time defending champion Golden State reach the conference finals for a franchise-record fifth straight year and eliminate Houston for the fourth time in five seasons. The Warriors did it with Durant sidelined by a calf injury sustained in the second half of their Game 5 victory.

“We’re all very happy, but now we’ve got to get home and get some rest and prepare for the next round,” Kerr said.

There won’t be a lot of time to recuperate with the conference finals starting on Tuesday night in Oakland against the winner of the Denver-Portland series. Kerr said he’d give his team the weekend off after most of his key players logged heavy minutes in this series in which each game was decided by six points or fewer.

Though this team has had plenty of big victories as it won the NBA title in three of the last four seasons, Kerr and many of his players acknowledged that this win was pretty special.

“It’s one of the most satisfying victories we’ve had during this run,” Kerr said.

Draymond Green said that downing the Rockets again also meant a bit more since Houston has said since losing to the Warriors in last year’s conference finals that its main focus was beating them this season.

“This one feels good … just because it was a team that said for years: ‘We’re built to beat them,’” Green said. “Then Kevin goes down and no one gives us a chance. You take all those things into account, this one feels amazing. If I said otherwise, I’d be sitting here lying to you.”

Curry struggled early, failing to score in the first half for the first time in 102 career playoff games, and had just 10 points through three periods. But he got going in the fourth, scoring 23 points.

There were questions entering the game about how the Warriors would weather the loss of Durant — and his more than 34 points a game. But they didn’t seem to miss a beat, getting 21 from Thompson in the first half before Curry closed it in the fourth.

The team said on Thursday that Durant would be re-evaluated next week and Kerr said after the game that it was too early to know if he could return at some point in the next series.

Though the Warriors were able to get past the Rockets behind big nights from Curry and Thompson, they know that their chances for defending the title are much better with Durant on the floor.

“I’m happy we won so we can get some rest and get him healthy,” Thompson said. “Because if we want to get this three-peat, we desperately need him back. He’s our best player, so we dearly miss him. We’ll hold it down while he’s out but it’s not the same.”

Curry finished out the series strong, but faced criticism for most of it as he struggled with his shot. He discussed the “noise” surrounding him lately and how he never let it get to him.

“I know what I’m capable of and it’s bigger than me,” he said. “I don’t get caught up in that. I don’t need any extra motivation. I don’t need to hear who I am as a player. I know that. My confidence never wavers.”

HOUSTON (AP) — James Harden and the Houston Rockets were eliminated by the Golden State Warriors yet again.

Now the Rockets are left to ponder how they’ll get over the hump and past the Warriors to contend for a title.

The two-time defending champion Warriors beat Houston 118-113 in Game 6 of the Western Conference semifinals on Friday night despite the absence of Kevin Durant and behind 33 second-half points from Stephen Curry to send the Rockets home for the fourth postseason in the last five years.

With each early playoff exit, the Rockets vow to find a way to defeat the Warriors and get their first championship since winning back-to-back titles in 1994-95. But year after year they are unable to do that and are faced with questions about whether this team ever will.

Harden was asked what the Rockets can do to get past Golden State.

“Keep fighting,” he said. “Obviously, they’re a very, very good team. They’re a great team. They’ve been in the Finals the last four or five years. We’re not losing to some scrubs. We’ve got to find a way to keep getting better, keep growing and keep putting ourselves in a position to keep playing them.”

Harden scored at least 30 points in seven of Houston’s 11 playoff games and led the team in each postseason game. Fellow star Chris Paul, who signed a four-year, $160 million last summer, wasn’t nearly as consistent, scoring just 11 points in a Game 5 loss before bouncing back with a playoff-high 27 points on Friday night.

“Regardless of who we’re playing, there are no moral victories,” Paul said. “We lost. We’ve got to get back to the drawing board. We’re going home and that’s just the way it is.”

Clint Capela, Houston’s 24-year-old center, was among the most vocal about the team’s desire to get another shot at Golden State this season after the Warriors beat Houston in the conference finals last year. He had some good moments in this series, but was never as dominant as he’d looked at times in the regular season. Capela scored just six points in both Game 4 and 5 and managed 10 in the elimination game, but got in early foul trouble and didn’t do much to impact the game.

“Clint is a classy guy and he’ll learn from this,” coach Mike D’Antoni said. “He’s young and he’s going to get stronger.”

Houston’s defensive leader P.J. Tucker doesn’t believe there’s a huge difference between the Rockets and the Warriors and said that if they would have done the little things better they would have won this series where each game was decided by six points or fewer.

After Friday’s loss Harden lamented the team’s tough start where the Rockets won just one of their first six games and were 9-11 after 20. They got going after that but struggled to dig out of the early hole and were the fourth seed in the Western Conference a year after capturing the top seed by winning a franchise-record 65 games.

“You want to give yourself the best chance and with the four-seed we had home court advantage in the first series but the second we had to play on the road which is difficult,” Harden said. “We’ve got to get off to a better start and we’ve got to give ourselves the best chance by getting that No. 1 or No. 2 seed. It’s a huge part of it.”

Harden claimed to know “exactly” what the Rockets need to do in order to beat Golden State next season. But wouldn’t reveal what that solution was when pressed for answers.

Despite this latest setback D’Antoni is optimistic that Houston can improve next season and finally chase another title.

“Our core is still young, and (general manager) Daryl (Morey) will do a great job,” he said. “We’ve got to gather ourselves this summer and regroup and get after it next year. All of us have got to do a little bit better job.”