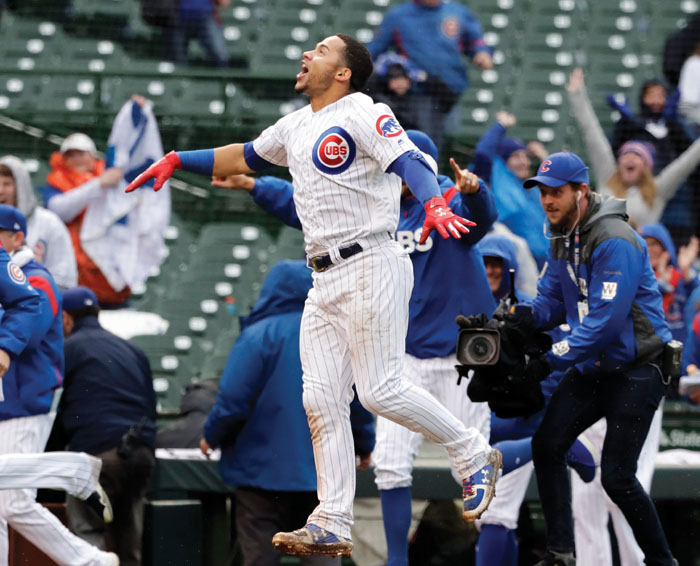 Chicago Cubs' Willson Contreras celebrates as he heads home with the game-winning solo home run against the Milwaukee Brewers during the 15th inning of a baseball game Saturday, May 11, 2019, in Chicago. The Cubs won 2-1. (AP Photo/Nam Y. Huh)

CHICAGO (AP) — Willson Contreras homered in the 15th inning to give the Chicago Cubs a 2-1 victory over the Milwaukee Brewers on Saturday.

Contreras turned on a 1-2 pitch from Burch Smith (0-1), sending a long shot to left field that gave Chicago its 11th win in 13 games. He spun and flipped his bat toward the Cubs’ dugout as the ball sailed toward the bleachers and was mobbed by teammates when he crossed the plate.

Chicago moved back ahead of the Brewers for the NL Central lead after falling into a virtual tie with Friday’s 7-0 loss. Milwaukee had its season-high seven-game win streak snapped.

Tyler Chatwood (2-0) struck out seven in four innings to cap a strong effort by the bullpen after Cole Hamels worked seven solid innings.

Mitch Moreland started Boston’s comeback from a 4-0 deficit against Félix Hernández (1-4) with a solo homer. The World Series champions won for the 15th time in 21 games following a 6-13 start.

Olson walked leading off against A.J. Cole (0-1) and scored when Laureano lofted an 0-1 pitch over the head of second baseman Jason Kipnis, who was running toward right field. Luplow appeared in position to make the catch but slipped on the grass and fell as the ball dropped in for a single, allowing Olson to score easily.

Brandon Dixon also homered for the Tigers, who beat the AL Central-leading Twins for the first time this season and snapped Minnesota’s four-game winning streak.

The Twins tied it 3-3 in the eighth when C.J. Cron homered off Joe Jimenez (2-1) before Hicks connected on the first pitch from reliever Trevor Hildenberger (2-2). Detroit added an insurance run on Christin Stewart’s RBI single to right.

Shane Greene pitched a scoreless ninth to earn his AL-leading 14th save.

ST. LOUIS (AP) — Jordan Lyles overcame a 30-pitch first inning to combine with four relievers on a two-hitter, and Pittsburgh beat St. Louis for its seventh win in 10 games following an eight-game skid.

Lyles (3-1) allowed one hit through six innings, struck out six and walked three, lowering his ERA to 2.09, fifth-best in the NL. He battled through the first after a rain delay of 2 hours, 56 minutes, at the start.

Richard Rodríguez and Francisco Liriano combined on a perfect seventh, and Kyle Crick gave up a single to Paul Goldschmidt around a pair of walks in the eighth, then escaped the bases-loaded jam by retiring Marcell Ozuna on a groundout. Felipe Vázquez pitched a perfect ninth for his 12th save in 12 chances.

Shohei Ohtani had two hits and an RBI for Los Angeles in his fifth game this season. He’s 4 for 21 since returning from the injured list following elbow surgery.

TORONTO (AP) — Marcus Stroman was angry when removed from yet another start when he received little run support, and Toronto lost to Chicago and Iván Nova (2-3).

Stroman (1-6) exchanged words with manager Charlie Montoyo and pitching coach Pete Walker after he was replaced by Derek Law with runners at the corners in the seventh. Stroman allowed four runs — three earned — and eight hits in 6 1/3 innings. He has lost three straight starts and has a losing record despite a 3.12 ERA.

Nova (2-3) allowed one run and five hits in six-plus innings to win his second straight start.