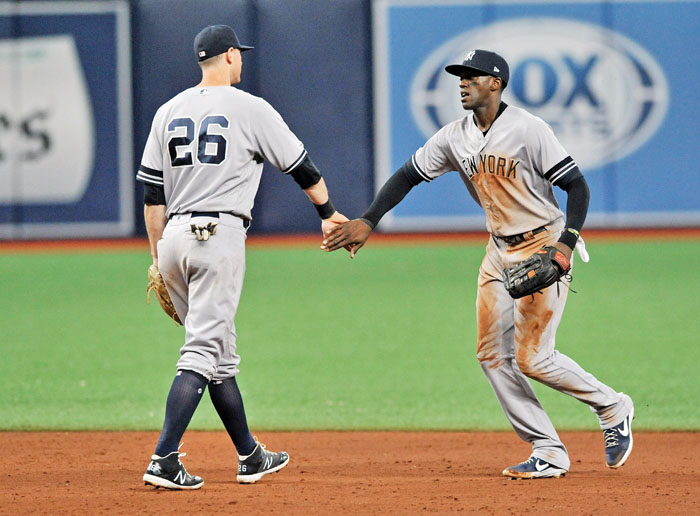 NEW YORK (AP) — Michael Tauchman reported to the New York Yankees for the first time before an exhibition game at Washington, three days before opening day and two days after he was acquired from Colorado in a trade.

“Aaron Judge came over during batting practice, said, ‘Hey man, you’re here to help us win. You need anything, let me know.’” the outfielder recalled. “That’s such a little thing. It took maybe 15 seconds, but it’s great to know these guys really made me feel like part of a team from the minute I stepped in the clubhouse.”

Little did Tauchman and the Yankees know how much the club would need him.

New York already has placed 16 players on the injured list this season, four shy of its disabled list total for all of last year. Still, the Yankees are 23-16, 1½ games behind first-place Tampa Bay in the AL East.

Clubhouse comings and goings at times paralleled Grand Central Terminal during rush hour. Manager Aaron Boone welcomed newcomers as if he were a maitre d’hotel. His standard greeting?

“What’s up, bro?” he said with a laugh before adding: “No, I just try and welcome them in my way.”

He credits the tone to Brett Gardner, who has been in pinstripes since 2008, and CC Sabathia, who arrived the following year and helped pitch New York to its last title.

“Guys when they do come in here from the minor leagues, whether it’s a young guy or somebody from outside the organization, “Boone said, “you want them to feel comfortable, feel at home in the room, and I think our guys do a great job of that.”

New York has not deployed the same batting order in consecutive games this season. The Yankees have used 36 players, three shy of the high set by Baltimore.

“The more comfortable people are, the more they can be themselves, the better they’re going to go out and perform,” Gardner said.

Even though he hasn’t played since April 20 because of a strained oblique muscle, Judge is in the clubhouse every day. At 6-foot-7, he has an outsized presence, constantly cheering, seemingly always available for his teammates.

Maybin was at Triple-A with Cleveland’s Columbus farm team when the Yankees bought his contract for $25,000 on April 25.

“The culture that they’ve created in here is very much like a family, a brotherhood. As soon as you come in, guys are welcoming you in with open arms,” Maybin said. “I’ve been on eight teams and this is my 15th, 16th professional season, and you don’t always have chemistry in every locker room.

“So I think it says a lot about the about the culture that they’ve created in here. I think that’s a culture of the only thing we’re trying to do is win ballgames. All the selfish stuff and the ego, you put that aside.”

“It’s always about the team — it’s the team, the team,” Tauchman said. “Whoever’s out there, the expectation is that you give us a chance to win, and we all embrace that.”