Warriors’ star Kevin Durant out for rest of West semifinals 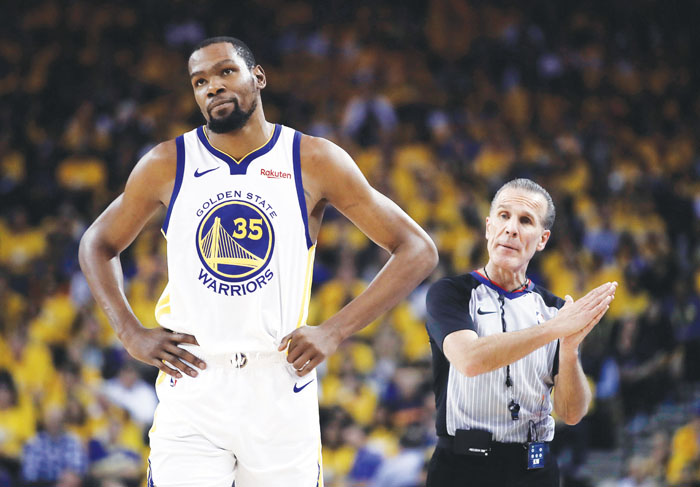 OAKLAND, Calif. (AP) — Kevin Durant will miss the remainder of the Golden State Warriors’ Western Conference semifinals against the Houston Rockets with a strained right calf.

The team has returned to Houston for Game 6 on Friday but Durant stayed behind in the Bay Area to undergo treatment. He is scheduled to be re-evaluated next week, meaning if there is a decisive Game 7 in the series Sunday he would be out of that one as well. The Warriors lead the series 3-2.

“It’s a tough injury,” teammate Klay Thompson said. “We’ll have to collectively make up for what he does. We’ve done it before. It’s going to be incredibly difficult. It’s the playoffs. I know they’re not going to feel sorry for us, the media, the fans. It will be a gut check time. We go down there and give it our best effort. That’s all we can do. If we do that, I have confidence every man on this team will step up in his absence. We wish him a speedy recovery because we’re not the same team without him.”

Durant limped to the locker room after landing awkwardly on his right foot following a baseline jumper with 2:11 left in the third quarter Wednesday.

The Warriors initially feared the two-time reigning NBA Finals MVP might have injured his Achilles, a far more serious issue.

Durant, who leads all postseason scorers at 34.2 points per game, finished with 22 points, five rebounds and four assists.

Golden State has been without injured stars like Durant, Stephen Curry, Draymond Green or Klay Thompson in big games before. The Warriors coaching staff planned to use the flight to reconfigure rotations for Game 6 without Durant.

“Any time you see something like that, it’s scary,” Curry said after the game. “You could see the look on his face. He didn’t really understand what was happening in that moment, trying to figure it out, went straight back to the locker room. During the timeout, we all looked at each other. There were a couple smiles in terms of what that meant for us as a team, the guys that were going to need to step up in those moments. Again, next-man-up mentality. Draymond said that at some point during that timeout.

“It’s hard to remove yourself from thinking about your teammate and your brother as he’s back in the locker room getting checked out. But we were able to lock back in and just find a way to win the game. Now we can regroup and understand whatever the situation is going forward.”

Kevon Looney will certainly play more minutes as he did Wednesday. The big man grabbed nine rebounds, five on the offensive glass, to provide a big boost off the bench.