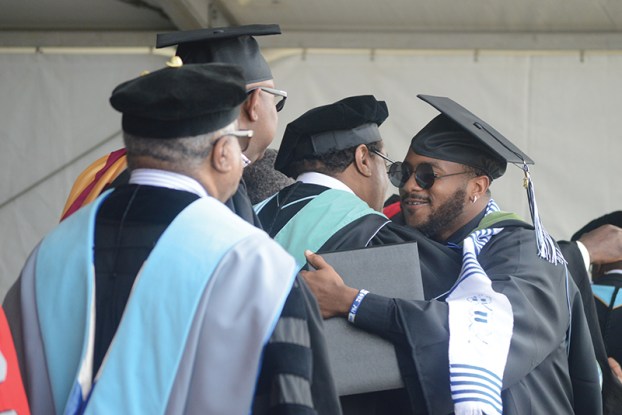 Quotes of the Week: ‘It is your time’

“Don’t let this be the end of your journey. It is your time, your moment in history. And I challenge you to work daily for a cause and not applause.”

— Roslyn Brock, chairwoman emeritus of the NAACP board of directors, speaking to Livingstone College graduates at
commencement last Saturday

“There’s many challenges, but we have the opportunity to continue on as an organization. Change what needs to be changed.”

— Mike Brady, a member of the Rowan County Rescue Squad, during a Tuesday night meeting on the future of the agency and possible changes in its role and funding

“A man I never knew is now a man I’ll never forget.”

— The Rev. Robert Blackburn, quoting a poster in tribute to Riley Howell of Waynesville, the UNC-Charlotte student who was shot last week when he confronted a gunman who had opened fire in a campus building, killing Howell and Ellis R. Parlier of Midland and wounding four others

“I’m not even sure if all of you were aware of the impact of what you were voting on.”

— Mary James, who was among several tennis players who questioned whether city officials had been transparent in the decision to convert two tennis courts at City Park for pickleball

“I am quirky, and even when I am my most stressed, this group of people finds a way to love me.”

— Taylor Coffer, a junior at Carson High School who says being in the cast of the theater department’s spring musical, “Freaky Friday,” is like being with family

“I’ll take this result, every day and twice on Sunday.”

–– Matt Parrish, coach of the Salisbury High School girls soccer team, after a 4-1 win over Hibriten on Tuesday in the
2A state playoffs

“You can take it to work with you.”

— Brian Ward of Granite Quarry, who was among residents of Granite Commons who asked the Board of Aldermen to address concerns about the stink of chicken manure from a farm near their neighborhood