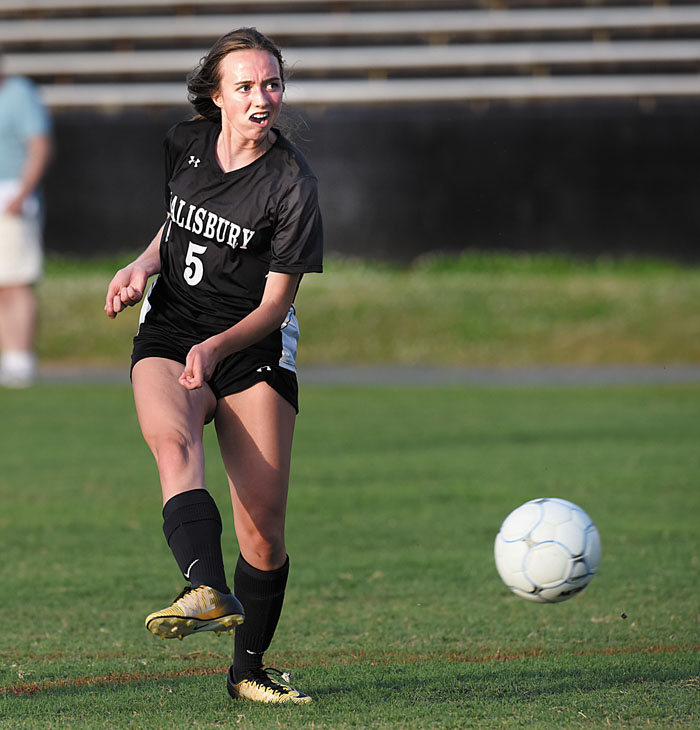 SALISBURY — Salisbury senior Ellen Simons stood on the sideline at Ludwig Stadium on Thursday evening and talked about her family.

She’s the last of the Simons siblings.

In the fall of 2010, her brother, David, made one of the more amazing plays in Salisbury High’s football history in that stadium. He was a soccer player first, but he also was the football team’s kicker. With Salisbury frantically trying to rally in the final minutes against Shelby, he executed a perfect onside kick — and recovered it himself. Not long after that, John Knox was firing the winning touchdown pass to Dominique Dismuke, but without Simons’ hustling play in a truly epic 2AA West regional final, there would have been no state championship for the Hornets.

“Believe me, David still talks about that night whenever he gets a chance,” Ellen said. “I was so proud of my older brothers, David and Phillip. I grew up watching them, admiring them, wanting to be like them. They were definitely the biggest influence on me wanting to become a soccer player.”

Simons has produced a terrific senior season (15 goals, 8 assists) for a well-balanced team that has displaced several scoring options if opponents focus all their attention on freshman striker Sutton Webb. There’s a reason the Hornets are 20-2 and Central Carolina Conference co-champions.

But ask SHS coach Matt Parrish about Simons, and he can talk for five minutes without mentioning soccer.

“With Ellen, soccer is about the 10th thing on my list, and I mean that,” Parrish said. “She’s compassionate, giving, caring. She’s been the perfect teammate. She’s been great for our school. She’s a fantastic student. She’s going to be our valedictorian.”

Simons has been a perennial all-county cross country runner every fall, but despite the time demands of athletics, she’s risen to the top academically.

“Well, I really like history a lot and I’m pretty good in math,” Simons said modestly.

At everything else, she just works hard. She’s managed to conquer subjects she doesn’t particularly like or isn’t especially interested in.

She brings that same tenacity to soccer.

“She’s special in that she combines that caring, friendly nature with some super competitiveness on the field,” Parrish said. “She doesn’t like to lose. She’s got some feistiness in her.”

Simons, who started playing soccer when she was 3 years old,  has been used in a lot of places by the Hornets. As a sophomore, she was an integral component of the defense. She’s usually an offensive center mid now, but she’s also played on the wing some and she’s been used as a forward in special situations.

Simons’ biggest goal of this season came at North Davidson on April 29.  North Davidson plays on a larger field than Salisbury’s, and Parrish had implemented new formations to take advantage of the additional space. It was a fierce game on the Black Knights’ Senior Night. Simons scored on an 18-yard rocket for the only goal of the evening.

‘Tensions were high between the teams and a lot was a stake as far as our conference and playoff seeding,” Simons said. “I may have scored the goal, but my teammates and Coach Parrish made that goal possible. Mostly, I just remember how exhausted we were  and how happy we were when it was over.”

North Davidson is very good and won its first-round game in the 2A state playoffs. For Parrish, that Simons goal was the goal of the season.

“Ellen was playing a position she hadn’t played before and was playing in a formation we hadn’t used before,” Parrish said. “To be able to score a goal in that situation, in that huge moment, that tells you what kind of athlete she is and how intelligent she is. She saw what she needed to do and did it.”

Parrish has been part of Salisbury soccer for 18 years.

“I’ve had a Simons for 11 of those years,” said Parrish, who has directed Salisbury’s boys program to three state championships. “I’m not sure what I’m going to do next year without one.”

Salisbury was seeded a surprisingly low No. 9 in the 2A West for this year’s playoffs.

“Its hard for me to believe you can be 19-2 in the regular season and a conference champion and be seeded ninth,” Parrish said.

Dropping from seventh to ninth may not sound like a serious deal, but it made a major impact for the Hornets. Instead of being at Ludwig Stadium tonight for a second-round game, they’ll be making a road trip to Black Mountain to take on No. 8 seed Charles D. Owen.

“They’re a formidable opponent, for sure, with a girl going to Lipscomb and a girl headed to Western Carolina,” Parrish said. “They’re not 16-2-1 by accident. We know we’ve got our work cut out for us.”

C.D. Owen has a soccer field with college dimensions. It’s also a turf field, so even if it rains, weather is not going to be a huge factor.

The Hornets, who don’t sound overly concerned about playing on the road. A lot of them were part of the team that won four playoff games a year ago.

“They’re a very good team, but we did beat them last year in the third round (2-0),” Simons said. “We believe in our coaches and we believe in each other. This is a team that has great chemistry. It doesn’t matter if you’re a senior or a freshman, you’re an equal part of it. We all need each other, and we understand that.”

The class of 2019 has a 79-9-3 record, including 51-5 in a Central Carolina Conference that always has multiple strong teams. TheClass of 2019  has been part of three conference championships. Parrish says it’s the winningest class in program history.

Whatever happens tonight in Black Mountain, Simons will leave her mark, a legacy that’s the equal of her talented brothers.

This is her last season of serious soccer. She’ll be a regular student at UNC-Chapel Hill in the fall, although she may be a terror in intra-murals.

“Soccer and this stadium, it’s been a family affair for us for a very long time,” Simons said. “My mom’s always in the concession stand and my dad’s always in the press box on the P.A. It’s been a special time for all of us.”