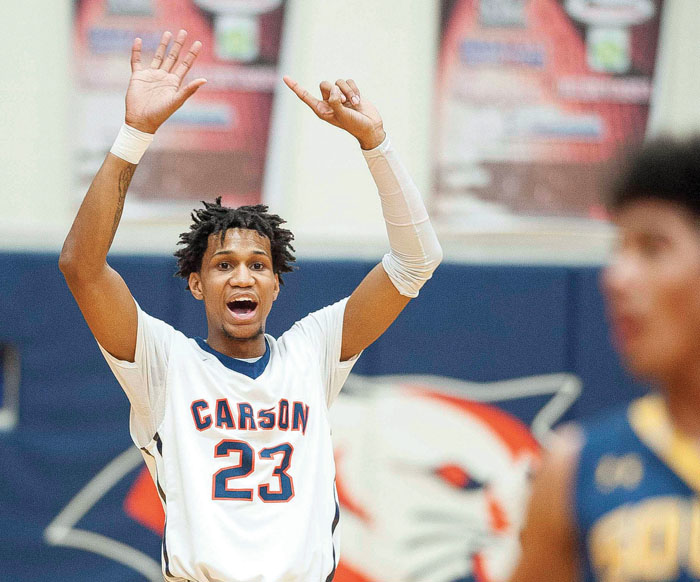 He signed with the Storm on May 3.

Hairston, a 6-foot-4 wing, went through the normal ups and downs that most freshmen experience last season. He endured those growing pains almost three hours away from home, at Division II Lander University in Greenwood, S.C.

He showed some flashes with the Bearcats — eight points in just six minutes at Livingstone in his return to Rowan County and eight points in a season-high 26 minutes against Tusculum.  But most of his playing time came in November and December. His appearances on the court were rare in January and February.

“I didn’t play as many minutes as I would have liked and there were other factors in me transferring,” Hairston said.

Some factors were out of Hairston’s control.

“There were two seniors who played the same position as me last season and Lander has two more seniors at my position for next season,” Hairston said. “When I sat down and talked to the new coach, he was upfront about everything, and we talked about what was best for my future. Transferring to a junior college looked like it might be my best bet. He told me he’d do everything he could to help me find a new place.”

Hairston didn’t have to look long or hard. DCCC coach Matt Ridge loved Hairston when he watched him play for Carson. DCCC is right up Interstate 85, only 32 miles northeast of Carson.

“Coach Ridge recruited me a lot in high school, so he was the first one I talked to about transferring,” Hairston said. “DCCC is close to home. That’s a good thing.  Family and friends can watch me play.”

Hairston had a tremendous senior season in 2017-18 for coach Brian Perry’s Carson club that went 26-3.  He averaged 20.5 points and 7.0 rebounds per game, was Christmas tournament MVP and shared county player of the year honors with West Rowan’s Caleb Mauldin. An all-region pick, he finished his career as Carson’s No. 2 all-time scorer with 1,659 points.

Then he played in the East-West All-Star Game in the summer of 2018, with and against some of the state’s best. He contributed to the West’s victory with seven points and eight rebounds in 19 minutes.

“Jamarius is used to winning,” Ridge said. “We look at him as a winner on the court, in the classroom and in life. His mother (Shonda) has helped him evolve into a dependable young man who has had done very well both athletically and academically.”

Long and agile, Hairston should be a nice fit for the DCCC Storm’s racehorse style. The Storm normally pushes the scoreboard at Brinkley Gym into the 90s and sometimes to triple digits.

Hairston is athletic and is a creative finisher at the rim and in the lane. He’s also a solid outside shooter. He didn’t perform well from long range in sporadic minutes at Lander, but he was a 42-percent 3-point shooter as a high school senior. That’s what made him almost impossible to defend.

“He can score in a variety of ways,” Ridge said. “Without question, we expect Jamarius to compete for playing time immediately and to help the 2019-2020 Storm compete at a high level.”

Hairston will be in uniform for the Storm for one season. After that, well, it just depends on how that season goes.

“My goal is a full D-I scholarship, but we’ll see what happens,” Hairston said. “The main thing is to keep pushing and keep improving as a player.”