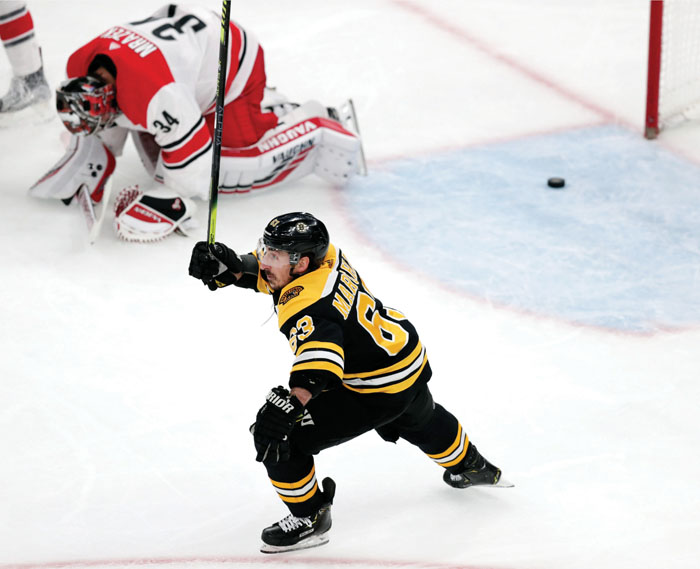 Boston Bruins' Brad Marchand (63) raises his stick as Carolina Hurricanes goaltender Petr Mrazek (34), of the Czech Republic, drops to the ice after a goal by Patrice Bergeron during the third period in Game 1 of the NHL hockey Stanley Cup Eastern Conference finals Thursday, May 9, 2019, in Boston. (AP Photo/Charles Krupa)

By JIMMY GOLEN AP Sports Writer
BOSTON (AP) — The door to the visiting team’s penalty box had scarcely slammed shut before the official was opening it again for another Carolina Hurricanes player to serve his punishment.
Penalty. Goal.
Penalty. Goal.
Twenty-eight seconds apart, Marcus Johansson and Patrice Bergeron scored on power plays during a four-goal outburst as Boston rallied from a third-period deficit to beat Carolina 5-2 on Thursday night in Game 1 of the Eastern Conference finals.
“We took advantage of our power plays early, and that’s huge,” said Bruins forward Charlie Wagner, who skated in alone on Petr Mrazek with 2:02 left to clinch it. “We tied it up pretty quick there, and I think we kept our foot on the gas for the most part.”
Boston trailed 2-1 before capitalizing on back-to-back power plays about three minutes into the third period. With about three minutes left in the game, the Bruins scored two more: One on Brandon Carlo’s deflected, slow-rolling empty netter, and then 11 seconds later on Wagner’s unassisted goal that made it 5-2.
“We were fortunate to only be down one goal, and then when you get those chances on the power play, you’ve got to make them pay,” said Tuukka Rask, who stopped 29 shots. “Today, we did.”
Back in the net for the first time since Game 2 of the second-round series against the Islanders, Mrazek made 23 saves for the Hurricanes. Curtis McElhinney finished off New York, but coach Rod Brind’Amour went back to Mrazek when he was clear by doctors after the five-day break between series.
“Petr was fine,” Brind’Amour said. “We left him out to dry there at the end.”
Steven Kampfer, starting for suspended defenseman Charlie McAvoy, also scored for Boston — his first career postseason goal — with about three minutes gone in the game. Sebastian Aho and Greg McKegg scored for Carolina.
It was still 2-1 when Jordan Staal was sent off for roughing in the opening minute of the third period. Johansson slammed home a rebound of Brad Marchand’s shot to tie it, and just 15 seconds later the Bruins were back on the power play when Dougie Hamilton was given 2 minutes for roughing.
Boston set up in the Hurricane’s zone, Jake DeBrusk sent the puck across the ice to Marchand, who tipped it back into the slot for Bergeron, and he slid it through Mrazek’s pads to make it 3-1.
Carolina coach Rod Brind’Amour called his timeout to settle things down. But Hamilton, a former Boston first-round draft pick picked up another penalty less than three minutes later.
The Bruins failed to score, but the crowd taunted the former Bruin.
“I don’t really care,” he said. “They’ve chanted my name before, so for me it is what it is. Obviously, it was unfortunate I was in the box and taking those penalties.”
THE BIGGER THEY ARE
Bruins captain Zdeno Chara took a wrist shot from Aho off the right foot late in the first period and left for the locker room, but he was back in the second.
The shot hit Chara on the outside of his right foot and the 6-foot-9 defenseman buckled over and went to the ice. He struggled to make it to the bench, and once he got there he was in obvious pain. He missed the rest of the first period but returned for the start of the second.
Boston was already without Chara’s defense partner, with McAvoy suspended one game for a shoulder to the head of Columbus forward Josh Anderson. McAvoy was averaging a team-high 24:26 ice time, and Chara was third.
Chara finished with 19:24, third-most for Boston in the game. He did not appear to be limping when he left the arena.
AHO THERE
Aho led the Hurricanes with 38 goals and 83 assists in the regular season, but he was even better against Boston. In three games, he had four goals and three assists.
In his first career playoffs, Aho now has five goals and 10 points in 12 games.
McKegg scored when he shot the puck off Rask’s shoulder and then barreled into the goalie as the puck bounced behind him and into the net. A review confirmed that the puck crossed the line before McKegg ran into Rask.
NOTES: The franchises met in the playoffs for the fifth time, with two of those coming before the Hartford Whalers moved to Raleigh in 1997. Boston is 3-1. … The Hurricanes reassigned forward Patrick Brown and defenseman Jake Bean to the Charlotte Checkers of the AHL.
UP NEXT
Game 2 is Sunday at 3 p.m.
___
More AP NHL: https://apnews.com/NHL and https://twitter.com/AP_Sports