It’s OK to be mediocre. In fact, it may even be beneficial 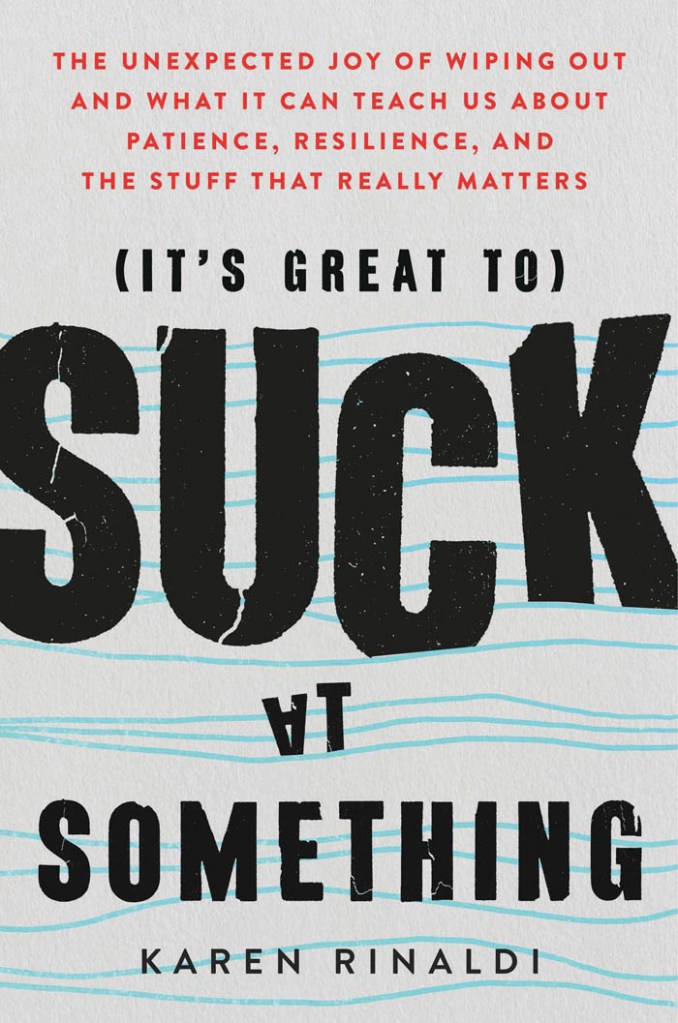 It's Great to Suck at Something: The Unexpected Joy of Wiping Out and What It Can Teach Us About Patience, Resilience, and the Stuff That Really Matters

“It’s Great to Suck at Something: The Unexpected Joy of Wiping Out and What It Can Teach Us About Patience, Resilience, and the Stuff That Really Matters,” by Karen Rinaldi. Atria. 256 pp. $26

If you’re going to write a book about sucking, you need to be qualified. A unique area of specialty, but Karen Rinaldi — by all accounts a successful writer and publisher — is well-suited. She’s a passionate surfer whose skills, which are not expected to improve significantly, might generously be called “mediocre.”

“I’m not in that honeymoon period of surfing when I’m trying it out, seeing if I’ll get the hang of it, romancing it,” she writes in her new book, “(It’s Great to) Suck at Something.” “By any objective measure, it’s a big part of my life, and has been for a while. … And — I still suck at surfing. But I love it. I think, in its way, it loves me back.”

That total, nonsensical dedication is key to Rinaldi’s campaign to get us to try something new — something that won’t make us more productive, pull in the big bucks or prompt anyone to marvel at our prowess. “Suck at Something” is a call to unleash the unexpected bliss that occurs when we “really, really struggle to do something unremarkable, uncelebrated and without much to show for it.” It’s a testament to perseverance without the pressure of perfection, to celebrating our failed efforts and becoming comfortable with discomfort.

Of course, we all already suck at something; to think otherwise, Rinaldi helpfully advises, is “delusional.” But unless we really care about that something, it doesn’t count here. Rinaldi is championing the continued pursuit of a hobby that we may improve at over time but will never truly shine at. Like your neighbor’s daily guitar practice, which is … diligent (pre-Rinaldi, that would have been thinly veiled shade; she manages to transform it into a genuine compliment). Or sewing those ridiculous clothes you’ll never wear in public but that make you happier than vintage Versace.

Rinaldi is an inspiring case study: She started surfing when she was 40 and, quickly taken with the sport, began arranging her middle-aged life around it. She’s surfed eight months of the year for nearly two decades and wiped out her savings to buy a plot of land in Costa Rica, sight unseen, for better proximity to the ocean.

Five years in, she caught her first wave. Yes, for real. Lower that eyebrow — she loves it.

“Suck at Something” is an expansion of a viral op-ed Rinaldi, author of “The End of Men” — the novel that inspired the movie “Maggie’s Plan” — wrote for the New York Times in 2018. Hundreds of readers responded that they, too, had discovered the joy of sucking: the runner who’s mediocre on a good day; the bagpiper who lacks talent but makes up for it in gusto because “a girl’s gotta rock.” The weekend golfer whose golf score is what his bowling score should be, and vice versa, neither of which is a dissuading factor.

Such stories are rare, which is why Rinaldi’s book feels more like a movement than just another self-help guide. Most of us would rather tell stories about our triumphs than our failures (unless there’s a comedic spin); look no further than Instagram to confirm that the humblebrag is a national pastime. Even Rinaldi cops to allowing her colleagues to assume she was decent at her beloved hobby until, well, she made a national announcement about her ineptitude. Why? Because we live in a “era of aspirational psychosis,” working longer and harder than our neighbors in pursuit of a calculated end-goal. Instead of accepting that it’s OK to be inadequate at something, we ignore whatever that thing is, brushing it aside and, in turn, diminishing our lives. We suck at allowing ourselves to suck.

While talent is clearly useful, it’s hard to argue with Rinaldi’s logic that there’s more to life than usefulness. Sucking “has a bad rap. It’s a reputation thing,” she writes. “There’s nothing inherently unpleasant about being substandard at something. … It’s just that our culture maligns and mocks ineptitude.”

“Suck at Something” reads like a memoir, with a colorful, action-packed plot that reaches several pinnacles: the time Rinaldi couldn’t wear pants, or sit down, for several weeks after almost tearing herself a – uh, experiencing a personal injury — comes to mind.

Such revelations are interspersed with expert commentary on the science and philosophy around sucking. Brené Brown preaches the benefits of embracing vulnerability; Andrew Zolli touts the deepened resiliency reserves that sucking fosters. We learn that if we release the illusion of control and lean into messiness, we’ll lower our stress and raise our creativity. When we follow our passions and bask in them — regardless of performance — we bend in ways that are beneficial emotionally and physically.

The science is nice, but Rinaldi sells the power of sucking with her charm and wit. She’s the relatable everywoman, the friend who would totally come watch us lead our skee-ball team to ruins (and not pretend that our lowly 10-pointers were ah-mazing). The book is lighthearted but intimately introspective; the overarching message is empowering without being cheesy. By the time she’s upright on her sleek Jim Phillips board, mid-breast cancer treatment and riding just one glorious wave, it feels like a battle cry: Suck without shame! Let’s reclaim sucking! Try new things; you don’t have to be good at them.

Anyway, we’ve needed a new cocktail party opener for years. Next time you sidle up to a stranger, silently toast Rinaldi and replace the tired “So, what do you do?” with “So, what do you suck at?”

And then get on with your imperfect life.