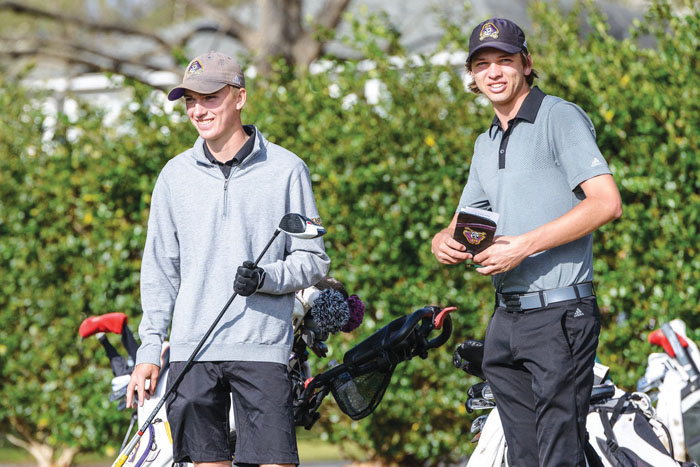 Submitted photo ... East Carolina golf teammates Logan Shuping, left, and Blake Taylor, share a laugh during a recent round. Shuping, who had an outstanding career at East Rowan High School, will play with Taylor in the U.S. Amateur Four-Ball in Oregon, later this month.

It continues. On May 22, Shuping will fly to Oregon, along with his parents, Todd and Lisa, brother Landon, and girlfriend Jocelyn Lowe, a track and field athlete at Lenoir-Rhyne.

With East Carolina University teammate Blake Taylor as his partner, Shuping will be competing in the U.S. Amateur Four-Ball at Bandon Dunes Golf Resort.

“Blake qualified for a U.S. Amateur and he’s qualified to play in a PGA event (the 2018 Greenbrier Classic),” Shuping said. “But for me, personally, this is the biggest golf event that I’ve ever qualified for, the biggest thing I’ve ever been a part of in golf.”

Shuping’s career locally is familiar to many fans. He was a terrific player at East Rowan for coach Rhett Teems, winning county championships his freshman and senior seasons.

Shuping’s Mustang teammates included Nick Lyerly, who stars now for UNC Greensboro, as well as his cousin Bryson Sprinkle, who now plays at Catawba. East was a powerhouse on the state level. East began a string of undefeated conference seasons while Shuping was captain that is still going. In 2015 and 2016, Shuping’s junior and senior seasons, East was 3A state runner-up.

Shuping committed to East Carolina as a junior. Press McPhaul, who now guides the N.C. State program, recruited Shuping for the Pirates.

“One day after I’d committed, Coach McPhaul contacted me and said East Carolina really wanted to get this kid from Wilmington — Blake Taylor,” Shuping said. “He asked me if I’d help recruit him.”

Shuping knew Taylor a bit from junior events. They’d been opponents at the Country Club of Salisbury as well as several other venues. Shuping and Taylor made the transition from adversaries to buddies during the recruiting process.

“We became good friends and after we both went to East Carolina, we became best friends,” Shuping said. “He’s a great guy and a great player.”

Taylor has been more successful on the course than Shuping during their days as ECU teammates. Shuping has competed in tournaments for the Pirates as a top-five player in all three of his seasons, but his freshman year probably was his strongest. He shot a 1-under round in a tournament as a freshman, but his best tournament round as a junior was 1-over. His stroke average has slowly crept in the wrong direction — from 75 to 77.

There have been several factors involved. Shuping has battled health issues (a blood disorder) and he’s weathered a coaching change. McPhaul, whom Shuping was very close to, left ECU for N.C. State after Shuping’s freshman year.

“I haven’t developed as much as I wanted to in college and I certainly haven’t played as well as I wanted to play so far,” Shuping said. “But at the same time, if I had it to do over again, I’d still choose ECU. I love the school, I love the town of Greenville, and I love the golf program. College has been a great experience for me.”

Shuping has excelled in the classroom. He’s a business administration major, with a double concentration in finance and marketing. If he doesn’t become a college golf coach, he’ll be a success in the financial services world. He’s already been named to the academic all-conference team twice. He was on the Dean’s List as a freshman and sophomore. He just completed his exams recently and will no doubt be on the Dean’s List again.

He’s also still a very solid golfer. He and Taylor started playing as Four-Ball partners with some success. Back in September, they drove to Florence, S.C., for a U.S. Amateur Four-Ball Championship qualifier. There were 42 teams gathered at Florence Country Club. Only two would advance to Oregon.

“We got off to a terrible start,” Shuping said. “We par the first hole and bogey the second. We parred the third hole. Then I missed a short birdie putt. We’re 1-over after four, and we’re starting to think, ‘Man, we took a day off from school for this. We drove four hours for this.’ But we were able to put those negative thoughts behind us. We kept playing, and the great thing about Four-Ball is that you can be super aggressive. You can go after pins. If you hit a bad shot, if you get into trouble, you’ve got a partner that you can trust to bail you out.”

Taylor got hot. He birdied three straight holes. Shuping birdied two of the next three, while Taylor birdied the one in between. Six straight birdies for the team.

“By the time we got to 15, we knew we had a chance, but it still was going to be really close,” Shuping said. “We knew there was a team at 10-under (60) and we felt like we had to get to 61 or 62 to get second place. I missed a short birdie putt on 15 and felt terrible about it. I thought that might be the one that made us come up just short.”

Birdies on holes 17 and 18 got Shuping and Taylor to 7-under 63. That was enough to get into a playoff for the second spot. Taylor birdied the first playoff hole — and the second — and he and Shuping advanced.

“That was back in September when we qualified and we still had our junior season in front of us and a school year in front of us, so qualifying for a tournament that wasn’t until May, well, it  seemed like a really long way off,” Shuping said. “But now it’s actually here. That’s really exciting.”

The field at Badon Dunes will consist of 128 teams, the best of the best from dozens of sectional qualifiers as well as teams exempted through previous success.

This is a relatively new tournament. This is the fifth year it’s been held.

“Everything is going to be brand new for Blake and for me,” Shuping said. “These are links courses. Neither of us has ever played on anything like it.”

Think terrain like a British Open. It’s basically golf without trees, but it’s sandy. The bunkers are deep. The wind is generally brisk.

“Blake and I have gotten advice from several people,” Shuping said. “Coach McPhaul has been there with the N.C. State team and Brian Lee (from the Warrior Golf Club) went out there when his daughter (Allison) was in a tournament there. I can’t really give you a score that we need to shoot in stroke play to advance because it’s all going to depend on how the weather is on that particular day. All we know for sure is that wind and weather will be huge factors.”

Shuping and Taylor will have a chance to play a practice round on each course before competition begins.

“I’ve got a great partner and we’re a good team mostly because we have great chemistry as best friends,” Shuping said. “No matter how big a tournament is, we have fun out there. If one of us hits a bad shot, it’s not like the other one is going to get mad about it.”

While he’s never been to Oregon, Shuping has visited the Pacific Coast before. After he graduated from East Rowan, a family trip took him to California where he had an opportunity to play at Pebble Beach.

“Pebble was an unbelievable experience,” Shuping said. “I haven’t even gotten to Oregon yet, but I know this might be even more memorable.”

So what’s he been doing to pass the time before the big trip? Well, he is who he is. His hobby is playing golf.

On Wednesday morning, he and Sprinkle and former teammates played at McCanless. Shuping shot 66.

“We had a great time,” Shuping said. “Some pretty good golf and the banter was even better. A relaxing day.”

The calm before the storm.