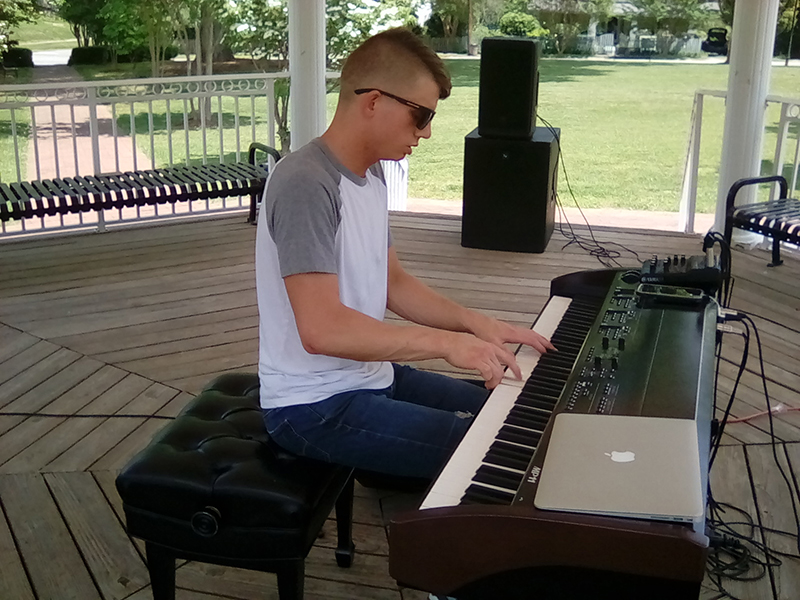 Sponsored by Spencer Public Library, The Little Choo-Choo Shop, Mary Mae’s and Barnhardt Jewelers, the program focused on the talents of children of all ages.

The youngest talents started with fourth- and fifth-graders from Koontz Elementary School singing beautiful pop songs. Mia Mason, an eighth-grader at Knox Middle School, belted out “I Will Do a New Thing in You.”

Next, three middle-school brothers, otherwise known as the Bulla Boys, performed behind a puppet stage as the main characters in two short puppet skits. One skit, called “Big, Bad Bully,” warned students of the evils of bullying others.

When a North Rowan High School bus arrived and 20 or more students from “The Lion King Jr.” cast spilled out onto the lawn, everyone anticipated their performance in the gazebo. The group sang three hit songs from the play: “Circle of Life,” “ Be Prepared” and “Can You Feel the Love Tonight?”

Kluttz told the audience the story of his early life and adoption at the age of 4. His mother had been a drug addict and his grandmother had been abusive before his family adopted him. Since his new father owned a piano business, Jacob was in awe of the grand piano in his new home. Over time, Jacob taught himself how to play and now music is his passion.

Greg Luster, a lover of rap and rhyme, played with a secular group called Amour in Charlotte until 2009 when he broke away to pursue his dream to glorify God in music.

Melissa Summers of Thelma Smith Foundation added much to the program by painting faces of young ones and giving away prizes and coupons for local restaurants.

Organizers would like to thank the art students of North Rowan High School for the beautification of the park with mosaic tiles and birdhouses. They also extend thanks to the mayor and the Spencer Board of Aldermen for their attendance, and North Rowan drama teacher Leigh Alexander and art teacher Lori Gray for their involvement.

Special thanks also goes to local businesses who financially gave so that Jacob Kluttz could be the featured artist.