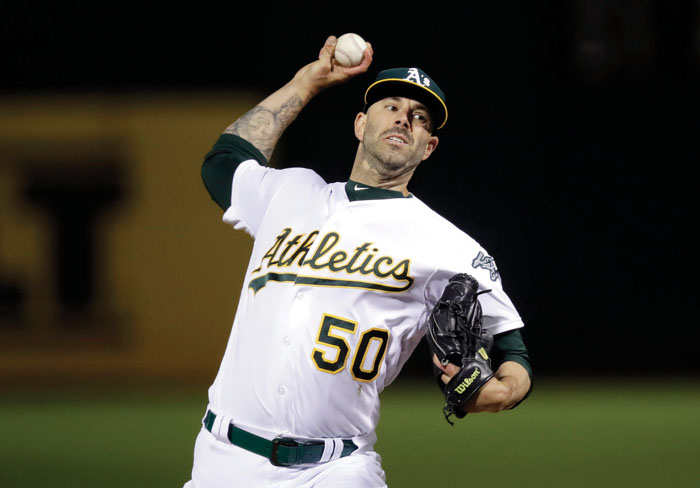 Oakland Athletics pitcher Mike Fiers works against the Cincinnati Reds during the first inning of a baseball game Tuesday, May 7, 2019, in Oakland, Calif. (AP Photo/Ben Margot)

He saved one special call for later.

No one talks to Bruce Fiers until after he has watched his son’s games the following morning. No spoiler alerts allowed. And Mike Fiers certainly wasn’t going to buck tradition.

“He doesn’t want to ruin it,” Fiers said. “He just wants to watch the game and go from there. He called me today and said he’s been dealing with some stuff at work he’s not pleased with but he’s had a smile on his face all day so that’s cool for me to hear that.”

The younger Fiers also had a pretty big grin all day.

The 33-year-old journeyman began Tuesday night with a 6.81 ERA and had not won since April 2. He became the 35th pitcher with multiple hitters after a 131-pitch masterpiece in a 2-0 victory over the last-place Cincinnati Reds.

Manager Bob Melvin watched it twice, once from a cushioned chair installed near the end of the A’s dugout and again on replays. Fiers walked two and overcame an error by Gold Glove third baseman Matt Chapman.

“It looked great from the dugout,” Melvin said. “It looked even better when I saw some of the highlights today.”

Fiers wasn’t even sure if the game was going to happen. A bank of lights on a tower above the third deck in left field malfunctioned, delaying first pitch by more than 90 minutes.

That might have thrown off some starting pitchers, who are creatures of habit when it comes to pregame routines. Fiers was able to block out the electricity issues.

He is now part of an exclusive list of pitchers with multiple no-hitters.

Houston ace Justin Verlander no-hit the Milwaukee Brewers in 2007 and the Toronto Blue Jays in 2011, both times while with the Detroit Tigers.

“Obviously it puts you in pretty elite company,” Verlander said. “It’s a team accomplishment, don’t get me wrong. But it does go on the back of our bubble gum card. The second one is cool because it puts you in pretty elite company, but the first one is like you could never even dream of it. You could but you see guys with Hall of Fame credentials that never got one. The stars never quite aligned for them to throw a no-no.”

Fiers’ other no-hitter came on Aug. 21, 2015, in Houston, three weeks after being traded from the Brewers to the Astros. He threw a career-high 134 pitches in that game.

Against the Reds, Fiers again had a high pitch count. Melvin cautioned Fiers after the seventh not to allow any more runners, a warning Fiers took to heart. He needed nine pitches to get through the eighth and 13 to work the ninth.

“It was getting later in the game and they just didn’t have any hits so at that point you just want to finish what you started and do something cool for this team to kind of feed off of and build on,” Fiers said.

“I pride myself on being durable, making every start, being healthy, being a guy that they can rely on every fifth day. That’s why I’m here. I think that’s why they wanted to trade for me. I see myself as one of the top pitchers in this league, especially when I’m right. With this team we have, with the defense we can play and the way we can hit, I feel like when we’re out there we have a great chance to win when I’m pitching.”