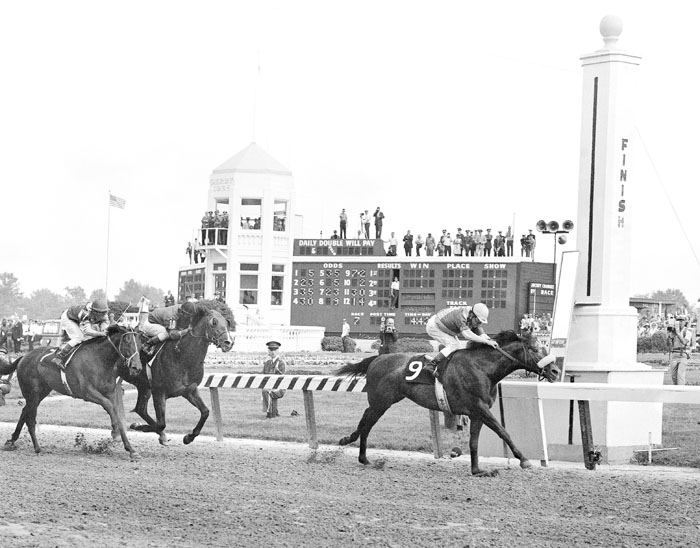 FILE - In this May 4, 1968, file photo, Dancer's Image, right, jockey Bob Ussery up, crosses the finish line to win the 94th running of the Kentucky Derby at Churchill Downs in Louisville, Ky. Forward pass, center, was second, and Francie's Hat, left, was third. Sent off as the 7-2 second choice, Dancer's Image rallied from last to win by 1 1/2 lengths over Forward Pass. The result was declared official, but Dancer’s Image was later disqualified after traces of phenylbutazone, known as bute, were found in Dancer's Image's post-race urinalysis. Dancer's Image was placed 14th and last; Forward Pass was declared the winner. (AP Photo/File)

Dancer’s Image crossed the finish line first in the 1968 Kentucky Derby, only to become the first horse ever disqualified days later as the result of a positive drug test.

It was the start of a four-year legal odyssey by owner Peter Fuller, who spent $250,000 — the equivalent of $1.52 million in today’s dollars — unsuccessfully fighting the disqualification.

Now, the owners of Maximum Security are dealing with a DQ of their own. Their horse led throughout the 145th Derby and crossed the wire first on Saturday, only to get disqualified for interference 22 minutes later after a video review by the stewards.

“Initially, I was flabbergasted,” said Abby Fuller, who watched in Florida. “I said there’s no way they’re taking this horse down because it was the Derby.”

Dancer’s Image rallied from last to win by 1½ lengths over Forward Pass even though jockey Bobby Ussery lost his whip.

Traces of the anti-inflammatory phenylbutazone, known as bute, were found in Dancer’s Image’s post-race urinalysis. Then it was legal at some tracks, but Churchill Downs wasn’t yet one of them. Veterinarian Alex Harthill had given the colt a dose of bute six days before the race, seemingly enough time for it to clear his system.

Dancer’s Image was disqualified by the stewards and placed 14th and last; Forward Pass was declared the winner. The trainer of Dancer’s Image and his assistant each received 30-day suspensions.

“There’s still some mystery to it, but it brought about some changes that were good for racing,” said Abby Fuller, citing the advent of split samples in drug testing.

The positive drug test was reported to Churchill Downs stewards two days after the Derby. After hearings, the stewards ordered the purse money to be distributed to the four horses finishing directly behind Dancer’s Image.

The Kentucky Horse Racing Commission upheld that order eight months later. But a circuit court in Kentucky overturned it in December 1970 on the grounds that tests conducted by the commission’s chemist were inadequate and contradictory.

In April 1972, the Kentucky Court of Appeals ruled that Dancer’s Image wouldn’t get the winner’s share of the purse; instead that money was awarded to Forward Pass, who finished second. The appellate court unanimously reversed the circuit court ruling and upheld the state racing commission’s ruling that said Dancer’s Image won the Derby but denied him the purse of $122,600.

The legal fight also cost Dancer’s Image untold money in stud fees because Peter Fuller said breeders were reluctant to pay for the colt’s services while the issue played out.

“For him, I know that it was probably like a deep injustice. He didn’t run horses in Kentucky again,” Abby Fuller said of her father, who died at age 89 two weeks after the 2012 Derby.

Peter Fuller sent the winner’s gold trophy back to Churchill Downs to be engraved, but the track never returned it.

“He always wished he had it still,” his daughter said.

“As far as I’m concerned, I won the Derby in 1968 because they made the race official,” he said. “What they did with Dancer’s Image was another thing. It had no reflection on me.”

The Derby media guide includes the official chart showing Dancer’s Image as the winner, with a two-sentence explanation about the DQ, but in other sections Forward Pass gets the credit.

Ussery, now 83 and still attending the races at Florida’s Gulfstream Park, watched the Derby and noticed Maximum Security veer out from his path along the rail. He didn’t initially realize the impact the colt’s move had on other horses, including War of Will.

“The rules in racing are you got to keep a straight course and not interfere with another horse,” he said. “He did come out in front of that horse.”

The 1968 Derby inspired Abby Fuller to become a jockey and she’s now a racing ambassador at Gulfstream.

She disagreed with the most recent DQ.

“I feel like it was political correctness,” she said, citing the impact that the deaths of 23 horses at Santa Anita this winter has had on the industry. “Anyone who has watched races has seen worse. Maybe that’s not a good argument anymore. If that’s going to be the new way, then so be it.”

The couple already has lost the first round.

The Wests filed a protest and appeal of the DQ, which the Kentucky Horse Racing Commission denied Monday. The decision was hardly surprising because Kentucky regulations state that stewards “shall make all findings of fact as to all matters occurring . during the running of a race” and “shall not be subject to appeal.”

The Wests’ next move would be to go to court.

Gary West said by phone Wednesday that he expects to comment further on the matter in the next couple of days.

“We’re making our decisions on one thing and that’s what happened in the race,” he told The Associated Press. “We don’t care about anything that happened before that.”

Once this year’s Derby was declared official and the Country House backers were paid, there’s no way for Maximum Security bettors to collect even if the courts were to reverse the outcome.

In 1968, the backers of Dancer’s Image got their winning pari-mutuel payoffs; this year, bettors on Maximum Security lost $9 million in win, place and show wagers because the horse was disqualified before the race was declared official.

West has said Maximum Security won’t run in the Preakness on May 18; Country House won’t either.

Much like 51 years ago, Fuller is amazed people are still buzzing about the Derby result.

“I’m laughing because we’re relevant,” she said. “I bet a lot of them will be watching the Preakness to see what’s going on.”