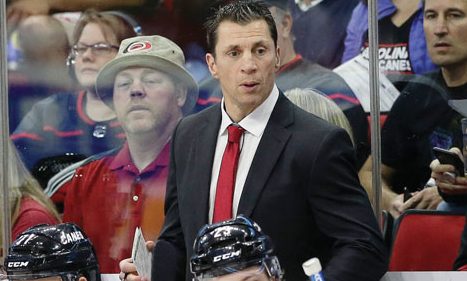 BOSTON (AP) — The verdict is in on Boston Bruins defenseman Charlie McAvoy: Good player, but not much of an attorney.

Speaking on the eve of Boston’s Eastern Conference final opener against the Carolina Hurricanes, McAvoy said Wednesday he made his case to the NHL’s player safety authorities but couldn’t talk them out of the one-game suspension that will keep him out of Game 1 on Thursday night.

“I think that we put forth a pretty good defense,” McAvoy said. “Whatever, I have to serve it. I respect the process. I’m glad that I was able to say my piece and be able to defend myself, but all things together, I’m not a very good lawyer, I guess.”

The Bruins advanced to the NHL’s final four when they eliminated the Columbus Blue Jackets on Monday night, but McAvoy will get a late start in the conference finals. He was suspended one game for a shoulder to the head of Blue Jackets forward Josh Anderson in the 3-0 victory in Game 6.

Here are some other things to look for in the East finals:

The Hurricanes questions of their own.

Both Petr Mrazek and Curtis McElhinney have played well in goal so far this postseason, and coach Rod Brind’Amour said after arriving in Boston on Wednesday that he’s decided — but won’t yet announce — who will be in net for Game 1.

Mrazek started 40 games in the regular season and the first nine of the playoffs, including all seven of the first-round victory over the defending Stanley Cup champion Washington Capitals. But he was injured in Game 2 of the second round series against the New York Islanders. McElhinney, who started 33 regular-season games, won three in a row to help the Hurricanes reach the conference finals.

Brind’Amour has said his decision will be “pretty easy.”

“Got to make sure both guys are 100% healthy, because that trumps everything,” he said. “It won’t be more than a 10 second conversation.”

The Bruins have no such issues in goal: Tuukka Rask, the 2014 Vezina Trophy winner, has emerged as a star of the Bruins’ playoff run, posting a 2.02 goals-against average and shutting out the Columbus Blue Jackets in the clincher.

It’s the fifth time the two franchises have met in the playoffs, including two when the Bruins played the Hartford Whalers before they moved to Carolina. Boston holds a 3-1 edge, with Carolina’s lone victory in the 2009 conference semifinals coming on Scott Walker’s overtime goal in Game 7.

That was the Hurricanes’ last series win until this year.

“He never lets me forget it,” said Brind’Amour, who was Walker’s teammate on the ‘09 Hurricanes but was in the medical room when Walker scored in Boston. “That was a great series and it’s been a long time. Obviously I’d love to have the same result.”

The last time the Bruins reached the Eastern Conference finals, first-round draft choice Dougie Hamilton was a rookie who was seen as a long-term replacement for Zdeno Chara as the backbone of the Boston defense.

But with restricted free agency looming after the 2015 season, he was shipped to Calgary. After three years there, he was traded to Carolina.

Still just 25, Hamilton said he has no hard feelings toward the Bruins. But he doesn’t expect a warm welcome when he takes the ice on Thursday night.

“If they still care about me that much,” he said, “I think it’s a compliment to me.”