‘Grease’ is the word for Rowan-born actor pursuing his dream 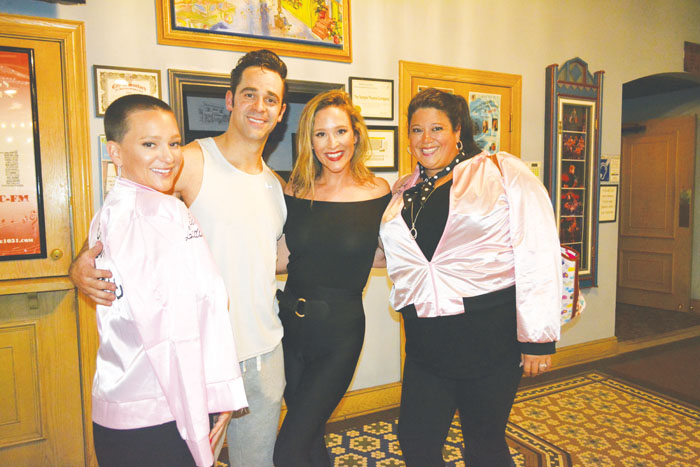 Alex Yost is appearing as Danny Zuko in ‘Grease’ at the Temple Theatre in Sanford through May 12. After a performance, Yost greets a group of fans dressed as The Pink Ladies. Susan Shinn Turner photo

SANFORD — On his resume, Alex Yost lists tumbling under the “special skills” heading. Which is why he does a back flip near the end of the musical “Grease.”

The show is finishing at two-week run Thursday through Sunday at the Temple Theatre in Sanford. Because of multiple sellouts, the theater has added shows, including three on Thursday — at 9:30 a.m., 2 p.m. and 7:30 p.m.

Which means three back flips.

His tumbling skills are self-taught.

“When I grew up, I had a trampoline and a pool and no brain,” says Yost, the son of Donny and Jeannie Yost of Salisbury.

After East Rowan, he attended Wingate University, graduating with a bachelor’s degree in vocal performance. He also took classes at Stamps Baxter School of Music in Nashville to hone his gospel music skills.

Additionally, he’s taken classes in the Meiser technique of acting.

After graduation from Wingate, Yost went to Elon University in early 2012 for auditions with Norwegian Cruise Line to be part of its entertainment staff. He didn’t get a callback. So he took a sales job, sang with a gospel quartet called Surrendered, and emceed for Virtual Sounds Entertainment — until he got an email three years later from Norwegian offering him a contract.

In August 2015, he says, “I threw my old life away” and signed the first of four contracts with the cruise line.

“I should probably just put acrobatic tricks,” he notes.

Locally, Yost has appeared in “Les Miserables” and “Hot Mikado” with Piedmont Players theatre. At Wingate, he had roles in the operetta “Die Fledermaus,” “Orpheus in the Underworld,” “Hansel and Gretel,” and “The Mikado.”

He models with Directions USA in Greensboro and Bella Agency in New York City.

“Any kind of extra money you can make is great,” he says.

After “Grease” and spending some time with his family, Yost plans to return to New York for voice, acting and dance classes.

“You can never be too polished,” he says.

In August, he’ll begin another six-month contract with Norwegian cruises, which will take him to Asia, Australia and New Zealand. He admits to having celebrity status aboard ship.

“You have to carry yourself in a certain way and maintain a high standard of professionalism,” he says.

He works about 12 hours a week, which allows him plenty of time to explore all the ports of call.

“When I say I get paid to travel, it really is true. It is a really great life. When I work, I’m actually doing what I love.”

His friends at home could not be more proud.

“I knew he had to be on stage somewhere,” says Dean Orbison, his East Rowan chorus teacher. “I was thrilled when he went to New York because I kept pushing him in that direction.”

Orbison has about a dozen former students who are music teachers, but didn’t want that for Yost.

“Some things, you just know,” he says.

Yost’s best friend is Adam Yoe, an East Rowan classmate. Yoe is a maintenance mechanic at Dan Nicholas Park, and he and his wife, Courtney, have a son, Easton, who just turned a year old.

“I couldn’t be happier for Alex,” Yoe says. “I knew how badly he wanted it. To see him blossom and grow and evolve into this performance machine he’s become is awesome. I hope to see him on Broadway or in the movies.”

As part of his theatrical career, Yost overcame an early struggle with attention deficit disorder. Being on stage, he says, helps him focus.

“I could focus on multiple things onstage without being distracted,” he says. “I actually had a higher GPA in college than in high school because I was doing something I was interested in.”

For example, he says, in the “Grease” song “Hand Jive,” “I sing, dance, make facial expressions, act, and not look tired. I have to look like I’m having the time of my life.”

Which he probably is.