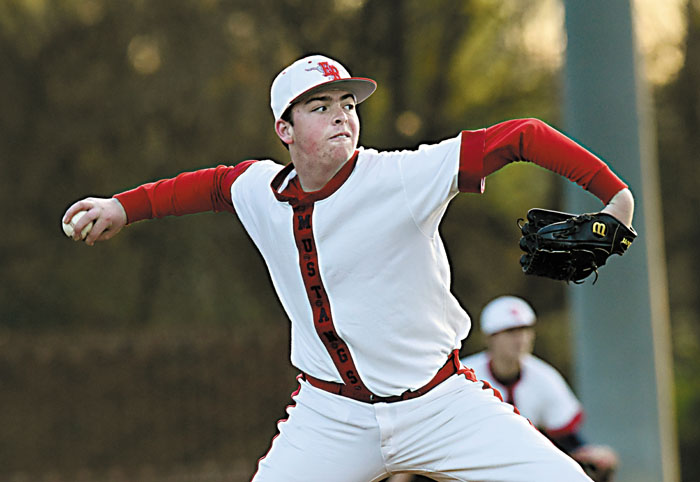 He still pitched a no-hitter on Tuesday and led the Mustangs to a 2-0 win against Tuscola in the first round of the 3A baseball state playoffs at Staton Field.

“My command wasn’t what I like for it to be and my usual velocity just wasn’t there early in the game,” Hunter said. “But my defense was there. (Shortstop) Bryson Wagner make a great play early in the game on a slow roller and that kind of got us going. My catcher (Charlie Klingler) kept telling me to stay calm. He told me that I’d find it.”

Hunter kept putting up zeroes, but so did Tuscola’s Landon Hendley. Hendley, who is 6-foot-5, 235 pounds, shut down the Mustangs’ offense for a long time.

“He was big and his fastball got on you quick,” Hunter said. “And he had a good breaking ball.”

East, seeded 11th in the 3A West bracket, finally broke through in the bottom of the sixth.

Wayne Mize led off with a single. Avery Shull walked to put two on. Hunter’s groundout to second advanced the runners.  Blake White walked to load the bases.

Griffin Warden hasn’t hit for a big average this year, but he followed with a huge hit. He fouled off a couple of 2-and-2 pitches. On 3-and-2, he lined a single to center to score Mize and Shull.

“Griffin is a real special kid, a great teammate,” Hunter said. “He was up there in a huge situation, and he put a good swing on that pitch.”

Hunter finally had a lead, and he held it. He struck out the first two Tuscola hitters in the seventh, his fifth and sixth strikeouts.

The last out came on a fly ball to right field to Jake Holshouser, and the Mustangs (17-10) celebrated a playoff victory — as well as a no-hitter.

“Honestly, I didn’t even realize I had a no-hitter going,” Hunter said. “They’d put so many balls in play, they’d made contact so many times when I had two strikes on them, I just had no idea. I was thinking one must have sneaked through at some point.”

Hunter threw 93 pitches, 71 for strikes. He walked one and hit one. He raised his county-leading strikeout total to 104. His lowered his county-best ERA  to 0.32.

East will play at Cox Mill in the next round. Second-round games are scheduled for Friday.