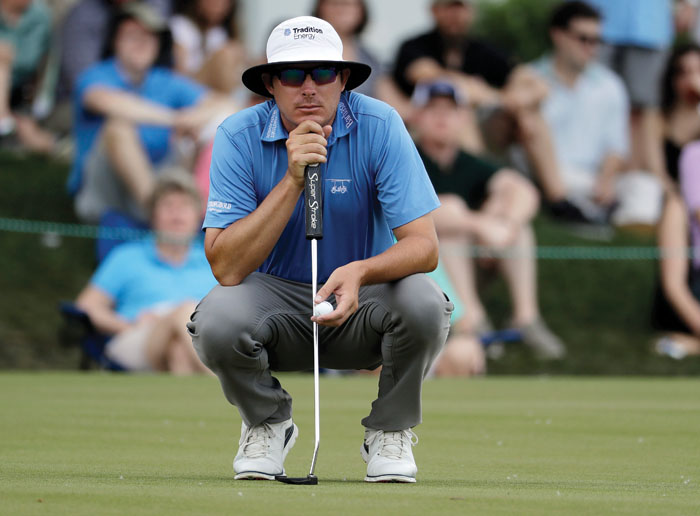 Joel Dahmen lines up a putt on the second hole during the third round of the Wells Fargo Championship golf tournament at Quail Hollow Club in Charlotte, N.C., Saturday, May 4, 2019. (AP Photo/Chuck Burton)

CHARLOTTE (AP) — Joel Dahmen held his own playing in the final group for the first time and wound up in a three-way tie for the lead with Jason Dufner and Max Homa on a stormy Saturday at the Wells Fargo Championship.

Very much in the mix was Rory McIlroy, who was reminded at every turn that it was his 30th birthday. He had a 3-under 68 and was two shots behind.

Storms moved in sooner than expected causing two delays, each lasting a little more than an hour and making a firm Quail Hollow play slightly softer.

Dahmen and Homa each dropped a shot over the last three holes for a 70. They were tied for the lead when Dahmen’s approach to the 16th was left of the green and came close to the water. He missed a 12-foot par attempt. Homa pushed his drive to the right on the 18th and was blocked by trees, played his second across the creek into the gallery and missed a 10-foot par putt.

Dufner, the former PGA champion, atoned for back-to-back bogeys after the first storm delay with two straight birdies, and he gave himself chances down the stretch. He wound up with a 71.

Pat Perez had a bogey-free 66 and was one shot behind. Six players were separated by three shots going into the final round, a group that includes Justin Rose, who bogeyed the 18th hole from a poor tee shot and shot 68.

Dahmen, the cancer survivor who keeps a light perspective on golf, had never been in the top five starting a round on the weekend, and he had a chance to fade quickly when he was in the trees, misjudged a pitch that went into the bunker and made double bogey. After five holes, he already was four shots behind.

He answered with a shot into 12 feet on the par-5 seventh for eagle, a wedge to 6 feet for birdie on the next hole and solid golf the rest of the way.

“I thought I was going to be a lot more nervous in those opening holes and I wasn’t,” Dahmen said. “After I made double, then I got nervous because I didn’t want to shoot myself out of this thing. I wanted to keep having fun and keep being in this tournament. Geno, my caddie, did a great job today, just kept it light.”

That would be Geno Bonnalie, who two years when McIlroy parted with his caddie put out a mock application for the job on social media that began by taking credit for guiding Dahmen to a tie for 68th in the Reno-Tahoe Open.

Homa ended 30 holes without a bogey when he missed a 6-footer for par on the 11th hole, and he failed to convert two birdie chances before his bogey at the end. Now it’s his turn to play in the final group on Sunday with Dufner.

“All you can ask for is to have a chance,” Homa said. “I think I did that today. Obviously, we have a long 18 holes to go on a hard golf course, but I’m proud of the round. I like how I played, I like my chances and I like where I’m standing after three days.”

Dahmen will be in the penultimate group with Perez.

With two players going for their first win, and Dufner still trying to emerge from a slump, McIlroy liked his position two shots behind. He heard “Happy Birthday” at every turn, made his first birdie as a 30-year-old on hit the par-5 seventh hole and looked to be ready to make a move when he hit from a loose divot on the 12th fairway to just outside 10 feet.

That’s when the second horn sounded to stop play. McIlroy returned and ran his birdie putt 5 feet by the hole, missed the next one and lost ground with a bogey. That was his last mistake. He picked up birdies on the reachable 14th and the par-5 15th and is poised to join Tom Weiskopf as the only three-time winners at Quail Hollow. Weiskopf won the old Kemper Open three times on this course before the tournament moved to Washington.

“This golf course really rewards patience and rewards discipline,” McIlroy said. “And I feel like I was both of those today.”

The top of the leaderboard looked similar to when the round started, except that McIlroy and Perez are a lot closer, and they all have a lot more company.

Another shot behind was a group that include Sergio Garcia, who shot 30 on the front nine in the morning on his way to a 65, and Rickie Fowler, who had a 66. Fowler won his first PGA Tour title at Quail Hollow in 2012.

DALY CITY, Calif. (AP) — Sei Young Kim shot a 4-under 68 on Saturday at Lake Merced to take a three-stroke lead in the LPGA MEDIHEAL Championship.

Playing through a back injury that has forced her to alter her swing, Kim rebounded from an opening bogey with an eagle on the par-5 fifth. The 26-year-old South Korean added birdies on the par-4 11th and par-5 15th and 18th to take a 10-under 206 total into the final round.

FINDLAY, Ohio (AP) — A golfer who got his first hole-in-one this week at a course in northern Ohio didn’t wait long for his second, recording an ace just six holes later.

The (Findlay) Courier reports 62-year-old Dale Cohen’s double aces came on a raw, rainy and blustery Monday morning that prompted most members of his league at Sycamore Springs Golf Course in Findlay to beg off.

Cohen, a Findlay resident with a 17 handicap, used an 8-iron to ace both the 135-yard second hole and the 138-yard eighth, finishing with a round of 89.

The National Hole In One Registry says the odds of making two aces in the same round are roughly 67 million to 1.

Cohen says he’ll savor his odds-breaking feat for the rest of his life.

Information from: The Courier, http://www.thecourier.com

Duke’s Daniel Jones gets more than passing grade at…