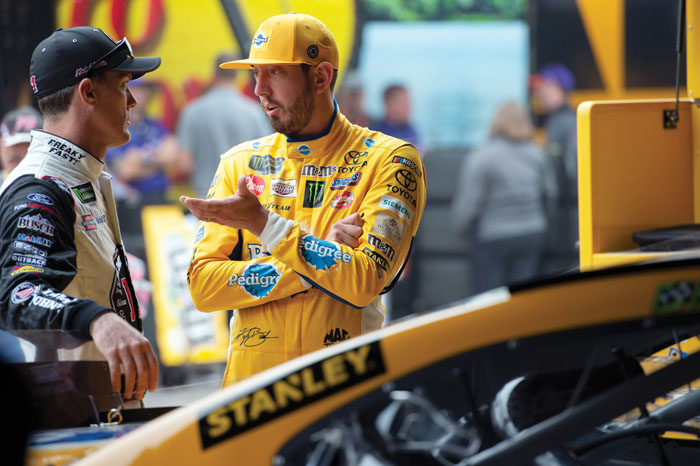 Kevin Harvick No. 4, left, and Kyle Busch No. 18 talk before the start of the Monster Energy NASCAR Cup Series practice, Saturday, May 4, 2019, at Dover International Speedway in Dover, Del. (AP Photo/Jason Minto)

DOVER, Del. (AP) — Morgan Shepherd pushed his No. 89 Chevrolet for a few feet through the garage with all the might a 77-year-old NASCAR driver could muster before yielding to his crew.

Pushing 80, Shepherd just might race long enough for his age to match his car number.

“Oh, yeah. That won’t be nothing,” Shepherd said.

Shepherd made his mark with a smaller, yet significant, number in 1990: 11. Shepherd posted a record 11 straight top-10 finishes to open the season in the Cup series, driving for Hall of Fame car owner Bud Moore.

Kyle Busch is nipping at Shepherd’s milestone, going 10 for 10 headed into Sunday’s race at Dover International Speedway. Busch, the 2015 NASCAR champion, already has three wins and barely extended the streak last weekend when he finished 10th at Talladega.

“It is kind of on our mind right now,” Busch said. “Going into every week, we want to win. That is what we strive to do every time we hit the track. We thought it would come to an end last week at Talladega and it was close. We were right on the verge, but we made it through another one.”

Busch is one of NASCAR’s greatest drivers and just hit 200 career wins across all three national series. That he would run off this kind of consistency is hardly a surprise for the Joe Gibbs Racing driver that is a threat for a checkered flag each time he races.

Shepherd’s streak might be a bit of a surprise to a generation of fans who mostly know him as a senior citizen usually running at the back of the pack . Shepherd won four times in his prime and was a top contender in 1990 to win the championship. But his top-10 run ended when a blown engine led to a 20th-place finish at Sonoma. It took him six more races before he scored another top 10 and, though he won the season finale at Atlanta, finished fifth in the season standings. Shepherd was a spry 48 years old behind the wheel of the No. 15 Ford.

“We started blowing motors,” Shepherd said. “I was running with Bud Moore then and we had a lot of good runs back then.”

He still races in the second-tier Xfinity Series and was rooting for Busch to at least match the mark.

“He’s plenty capable,” Shepherd said. “He’s still got to have a little luck here. I knew he was knocking on the door. At Raceway Park in Indianapolis, I was the only one that won three races. Kyle came along and he matched it. He just tied me. Hopefully, he just ties me here.”

Busch started the streak when he finished second behind teammate Denny Hamlin in the Daytona 500. He has two thirds, a sixth, an eighth and two 10th-place finishes to go with his wins during the streak.

Busch has three career wins in 28 starts at Dover and finished 35th in the track’s first race last season. He starts 22nd on Sunday.

DOVER, Del. (AP) — Chase Elliott took a solo run on the track for qualifying and was alone atop the Dover speed chart.

Elliott followed his first win of the season with a pole at Dover International Speedway, topping the speed chart on a blistering day at the track with a record 165.960 mph in NASCAR’s first qualifying session since it reverted to single-lap runs.

“Hopefully, we can keep it going in the right direction,” Elliott said.

The speeds on the mile-concrete track may be going a dangerous direction for the field in Sunday’s Cup race. The new package this season had cars coming to Dover with 750 horsepower and more downforce that led to each car seemingly going faster than the last earlier in the day. Brad Keselowski held the track record of 164.444 mph, and 23 cars topped that speed during Friday’s lone practice session.

“If it’s a surprise to anybody, it’s not a surprise to the race teams,” 2014 NASCAR champion Kevin Harvick said. “I would argue that fast is easier this time around than it was last year with a bunch less downforce. It’s a lot faster but in my opinion, it’s a fair amount easier.”

Kyle Busch said there was “no question” the cars had hit dangerous speeds at Dover.

“If you have a problem here with the speeds we are carrying into the corner, it is going to hurt,” he said. “The faster you go, the harder you are going to hit the wall. The IndyCar guys were flying around here, and they don’t come here anymore, because it was too fast, too dangerous for them. Eventually, there comes a point where it becomes too fast for a stock car, too.”

Elliott claimed the official mark in single-lap qualifying. NASCAR for more than five years has used a group qualifying format but it was abandoned this week and it was back to single-car laps to set the field.

NASCAR was adamant it was trying to keep qualifying entertaining for fans because single-car runs are tedious, but teams continued to find loopholes that made the format a farce. Most drivers waited until the very last moment to pull off pit lane for their qualifying run; and all 12 drivers in the final round at California in March missed the cutoff point to even register a lap.

Elimination-style rounds were also cut. NASCAR said the single-car qualifying format will be in effect for the rest of the season, though group qualifying will remain in place at road courses.

“Qualifying, in my opinion, has been too much of a topic of conversation,” Harvick said. “The way that qualifying is now across all three series is going to be good to take away the conversation. We don’t need to be talking about qualifying, especially on a week like this especially after you had Chase Elliott win a race. Here we are, talking about qualifying instead of celebrating our most popular driver’s most recent win.”

The 23-year-old Elliott became the youngest pole winner at Dover. Elliott got his first win of the season, first for Chevrolet and first for Hendrick Motorsports. Elliott, from nearby Georgia and the son of Hall of Famer Bill Elliott, felt the rousing approval from fans. Elliott stopped by the Pool Room in Dawsonville, Georgia, a local watering hole in his hometown that sounds a siren across town to signal every victory by their favorite son. Elliott said the win meant more because his mother and grandmother cheered him on at Talladega.

“They’re hard enough to win much less when you have important people there in your lives,” Elliott said.

TOP OF THE CHARTS

I want my MTJ!

Martin Truex Jr. took a break from turning laps to spin some tunes on satellite radio. Truex, the 2017 NASCAR champion, recently played the hits and talked music as a guest DJ on Sirius XM Radio’s 80s on 8 station . Among the classic cuts, Truex put “The Reflex” by Duran Duran and the Bon Jovi smash “Livin’ on a Prayer” on his playlist.

“Is that what he picked,” Rachtman asked incredulously of Truex’s selections. “And I was such a fan of Truex. That’s one of the worst Duran Duran songs. He didn’t even pick a good Duran Duran song.”

Rachtman hosts the “Cathouse Hollywood” podcast and has served for years as the host of Dover’s race weekends .

Truex said the last-minute stint had him scrambling to find 1980s songs he liked.

“I got a lot of fan response from it, a lot of people listen to that channel,” he said. “AC/DC is probably my favorite of 80s.”

HAIL TO THE CHAMP

Joey Logano parked his No. 22 Ford on the White House lawn.

Logano and his 2018 team were feted this week by President Donald Trump , who called the championship run “a heart-pounding, high-octane NASCAR action finish .”

“It was an honor to be able to go there and be able to see the inner workings of our country,” Logano said. “I was so impressed by a lot of things.”

Team owner Roger Penske and NASCAR executive Mike Helton were among the dignitaries celebrated on the South Lawn. While some championship teams in other sports have declined Trump’s invitation for various reasons, Logano said he was honored to attend.

“It was a really neat moment to be standing on the stage with the President. Trying to make a speech with him looking over your shoulder was a little nerve-wracking,” Logano said. “It was maybe one of the coolest moments to walk up and see your car in front of the White House. I had never even seen the White House in person, then you see your race car parked in front of it. That’s a really cool picture.”

The Penske team was even served food not usually ordered at a drive-thru window.

“We had some barbeque,” Logano said. “It felt like it was fitting and it was really good. I mean, Chick-fil-A is real food, too. But I’m a fan of really good food, too.”

Logano found winning a championship comes with perks at the White House.

Several cars this weekend ran with “Charlotte Strong “ decals to honor the victims of a shooting this week in a University of North Carolina-Charlotte class.

Seven-time NASCAR champion Jimmie Johnson topped the final practice Saturday with a fast lap of 161.863 mph in the No. 48 Chevrolet. Johnson has a Dover record 11 wins, his last one on June 4, 2017. Johnson hasn’t won since that race and is mired in the longest losing streak of his career.