Buck Hurley Triathlon draws a crowd to swim, bike and run through Salisbury for its 10th anniversary 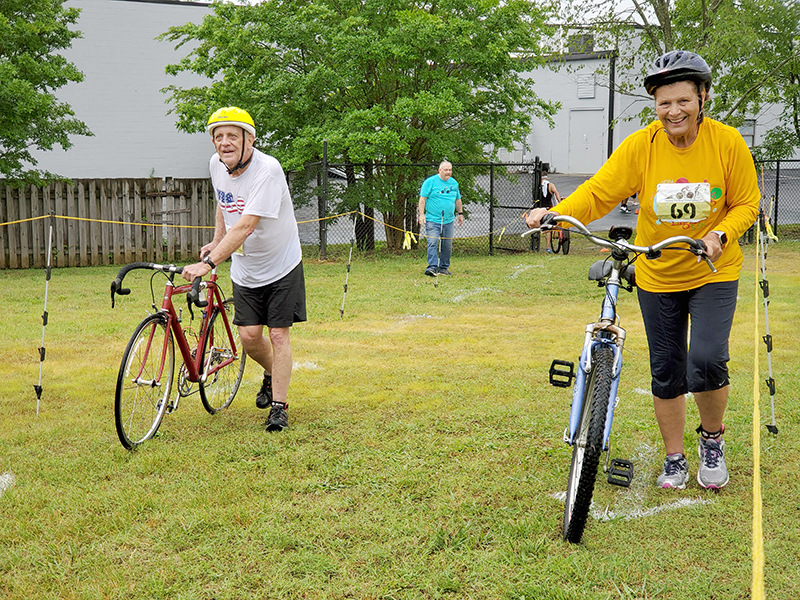 Josh Bergeron / Salisbury Post - Marvin Jones, left, and Karen Umberger, right, wrap up the biking portion of the Buck Hurley triathlon on Sunday. Jones was the oldest participant in the race's history and finished with a time of 2:02:30.11.

SALISBURY — In its 10th year, the Buck Hurley Triathlon drew more than 100 participants to swim, bike and run through a rainy morning.

Finishing at the head of the pack Sunday was Derek Kidwell, 35, of Mooresville. Kidwell finished with a total time of 47:41.72. As the top male, he received $500.

Kidwell said it was his fifth or sixth time participating in the race and the second time he’s won in three years. In 2018, he placed second behind Matthew Wisthoff of Wrightsville Beach. Kidwell took first in 2017, edging out Wisthoff by 9 seconds

Some, like 82-year-old Marvin Jones, ran the race for fun and the accomplishment of completing a triathlon, but Kidwell said he was intent on winning and the money was a nice prize.

Jones, who was the oldest participant in the history of the triathlon, finished with a time of about two hours.

The race asks participants to swim 300 yards, bike 10 miles and run a 5K. And it requires hard work from the staff of the J.F. Hurley Family YMCA, more than 100 volunteers and city of Salisbury crews, too.

“The city comes together to put on an amazing event,” said Ester Marsh, health and fitness director at the YMCA and the race director. “That is what it’s all about, I think, the community coming together.”

In addition to the roughly 110 participants in Sunday’s race, there were another 50 or so racers in the Buck Hurley kids race Saturday, adding up to a record crowd, Marsh said.

The top female finisher was Meghan Fillnow, 36, of Charlotte. Fillnow finished fourth overall with a time of 56:10.71. She also received $500.

Matt Storey, 34, of Salisbury, finished fifth with a total time of 56:21.97. He was the top finisher from Rowan County.

Participants came from as far away as Colorado Springs.

Morgan-Beverly Jones, 24, worked in Charlotte as a teacher last year before moving to Colorado. Jones said she began participating in triathlons while in Charlotte and was familiar with the Buck Hurley race, deciding to give it a try this year.

She flew to North Carolina on Saturday, just in time for the race.

But she owns more than the title of farthest distance traveled. She’s also training for the U.S. Olympics in Colorado. The Buck Hurley Triathlon was preparation for other, longer races that she’s planning to enter.

“I’m training for USA Triathlon and hoping to make it to something bigger, you know, the U.S. Olympics,” Jones said.

Only five of the many people in Sunday’s field had participated all 10 years. Count Kevin Parks in that small group.

Parks, of Charlotte, started participating in the Buck Hurley Triathlon as a student at Pfieffer University, where he was a swimmer. A teammate who had been a frequent participant in triathlons persuaded Parks to sign up for the Buck Hurley.

“Ever since then, I’ve just been racing, loving the sport,” he said.

And, with nine years under his belt, Parks couldn’t miss the race this year, even after he broke his foot in February.

“I’m still feeling it … but I said that I wasn’t going to miss this race,” he said. “I came in with the mindset of just having fun with it.”

One notable change since the first race is the degree to which the course is closed off, Parks said.

“The first year, we only had half of a lane on the street. So you could barely pass people. Now, we have almost the whole bike course blocked off,” Parks said.

That’s proof of the “city coming together,” Marsh interjected.

“We use every cone from the whole city, seriously,” she said.