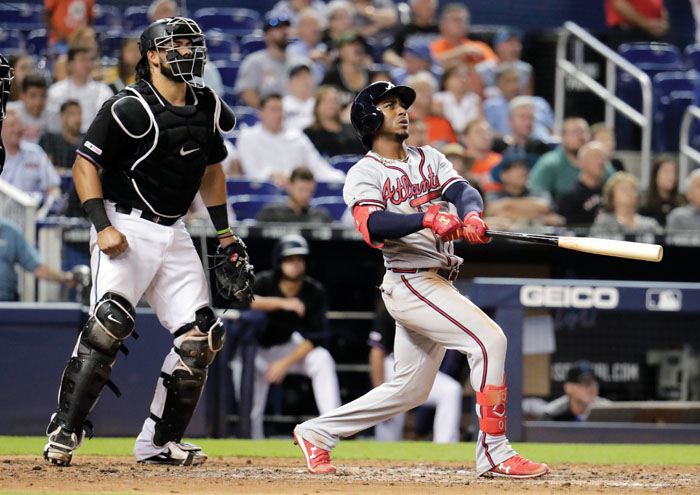 Atlanta Braves' Ozzie Albies, right, watches his grand slam during the sixth inning of the team's baseball game against the Miami Marlins, Saturday, May 4, 2019, in Miami. At left is Marlins catcher Jorge Alfaro. (AP Photo/Lynne Sladky)

Brian McCann drove in three runs for Atlanta, which trailed 2-0 after five innings before breaking out against Miami’s bullpen. Even Braves starter Mike Soroka got in on the offense, collecting his first career RBI with a seventh-inning single — his first hit of 2019 and the second of his brief big league career.

Albies tied a career best with five RBIs. The other time he did that: May 10, 2018, also at Marlins Park.

Soroka (3-1) lowered his ERA from 1.62 to 1.14 after seven very sharp innings. He allowed three hits, struck out six, walked only two and the two runs Miami scratched out with him on the mound were unearned.

Peter O’Brien, brought back from Triple-A earlier in the day, drove in the two Marlins runs in the second inning. The Marlins’ major league-worst record fell to 9-23, the third-worst in franchise history through 32 games. Only the 1995 and 1999 Marlins — both 8-24 — started worse.

Marlins starter Trevor Richards gave up two hits and three walks while striking out three in 4 1/3 shutout innings. Nick Anderson (0-1) gave up five runs in 1 1/3 innings, including the grand slam by Albies.

Atlanta’s five-run sixth began with a successful challenge of an out call at first to start the inning, with Acuña safe on the play after review. McCann’s double cut the Miami lead to 2-1 and the Marlins were one strike away from getting out of the inning — but Anderson grooved one to Albies, who posed for a second to admire the ball’s flight over the wall in right for his third career slam and seventh homer of the year.

Atlanta tacked on four more in the seventh.

Braves: Acuna was grimacing as he jogged to first in the seventh after apparently aggravating something on his fourth hit of the night. After a brief conference, he stayed in the game but was replaced in the field for the bottom of the seventh by Charlie Culbertson.

Marlins: O’Brien was recalled from Triple-A New Orleans on Saturday because the Marlins placed OF Garrett Cooper on the 10-day injured list with a left hand contusion. The move with Cooper is retroactive to Wednesday.

Atlanta recalled LHP Sean Newcomb from Triple-A Gwinnett on Saturday, and optioned RHP Touki Toussaint to Gwinnett. Toussaint threw 76 pitches and got the win for Atlanta on Friday over the Marlins.

Soroka hit O’Brien with a pitch with two outs and the bases empty in the sixth inning, though no hysterics ensued. Tensions ran high between the teams on Friday when Atlanta starter Kevin Gausman was ejected for throwing a fastball behind Miami RHP Jose Ureña — who was at the center of a storm last season when he hit Acuña and got suspended for six games.

Pillar climbed the fence and made a spectacular grab on Senzel’s drive in the third, but Cincinnati’s top prospect left no doubt his next time up in the fifth. He followed Derek Dietrich’s third homer in two games with his own solo shot into the right field seats, one of five homers for the Reds. Dietrich and Yasiel Puig hoisted Senzel into the air after he touched home plate.

Saturday’s outburst was more than enough for Tanner Roark, who set season highs with 6 2/3 innings pitched and seven strikeouts. That took pressure off a bullpen that allowed nine runs in six innings while the Reds squandered an 8-0 lead in a 12-11, 11-inning loss to the Giants on Friday. Cody Reed pitched the last 2 1/3 innings in his first appearance of the season.

Roark (2-1) allowed four hits, two runs and two walks while improving to 7-1 in nine career games against the Giants.

Dereck Rodriguez gave up four of Cincinnati’s homers on the way to his first loss in four road starts this season. Rodriguez (3-4) allowed eight hits and eight runs with four walks and one strikeout in five innings.

Pillar, whose diving catch on Friday in Senzel’s major league debut delayed the his first career hit, went to the fence in straightaway center field and, while in the air, stretched for a backhand stab before pulling his glove down a bit to make the circus catch with two outs.

Giants: 3B Evan Longoria was scratched from the lineup after developing overnight stiffness and inflammation in his left shoulder. Pablo Sandoval replaced Longoria in the lineup.

Reds: RHP Luis Castillo (3-1, 1.45) makes his first start on Sunday since being named the NL Pitcher of the Month.