A proud grandmother enjoys Washington with her Cherry Blossom Princess 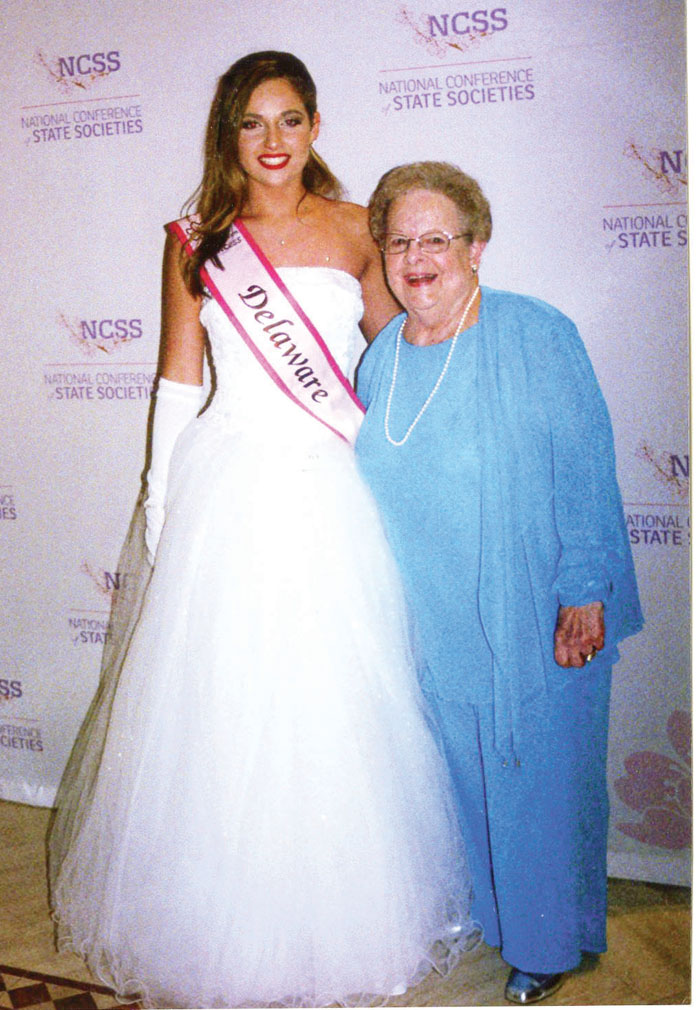 Submitted photo At the April 12 Grand Ball in Washington, D.C., Salisbury's Emily Stirewalt, right, stands for a picture with her granddaughter Margaret O'Connor, who was the Cherry Blossom Princess for Delaware.

SALISBURY — Back in April 1999, Emily B. Stirewalt celebrated Easter by holding her recently born granddaughter, Margaret — bonnet and all — under a blossoming cherry tree.

That small but cherished memory came back to Stirewalt this April, 20 years later, when she attended a weekend of activities during the 71st annual Cherry Blossom Princess Program and National Cherry Blossom Festival parade in Washington.

Stirewalt made the trip because her little Margaret O’Connor, now 20, was the Miss Delaware Cherry Blossom Princess. Stirewalt spent good portions of Friday and Saturday, April 12-13, with both Margaret and Margaret’s mother, Lois Stirewalt O’Connor.

Besides attending the Saturday parade down Constitution Avenue and seeing her granddaughter pass on a float with other state princesses, Stirewalt went to the National Conference of State Societies’ Cherry Blossom Grand Ball at the J.W. Marriott Hotel.

“It was a tremendous experience,” Stirewalt says. “It was a marvelous weekend for me.”

Many people equate the spring in Washington with cherry blossoms, but few know the whole week of activities provided for the Cherry Blossom Princesses and what a tradition it has become, Stirewalt says.

Margaret’s week was jam-packed with dinners, lunches, conferences, ceremonies and tours of places such as the White House, Jefferson Memorial and U.S. Capitol.

She visited the Women’s Military Memorial, a Kennedy Institute tree planting, the suffragist program at the National Museum of American History, the Mexican Cultural Center, the Lithuanian Embassy, U.S. Institute of Peace and receptions at the Dirksen Senate Office Building and Russian Embassy.

The Cherry Blossom Princess Program has long had a close association and emphasis of partnerships with Japan. The week started with the traditional Japanese Stone Lantern Lighting at the Tidal Basin.

The princesses toured the Japanese Information and Cultural Center and went to a presentation at the old Ambassador’s Residence, a reception at the residence of the Japanese ambassador, the National Conference of State Societies’ Kimono Fashion Show and Luncheon, and a wreath-laying at the U.S.-Japanese Memorial.

Overall, the week is seen as an opportunity for the young women to take part in educational, cultural and professional endeavors, while also networking and developing lifelong friendships.

“My granddaughter really got into it,” Stirewalt says. “It was a great opportunity for her to meet people.”

Though she’s a native of Alexandria, Virginia, and a sophomore at Northern Virginia Community College, Margaret was still eligible to represent Delaware. The Cherry Blossom Princess program described her  as a “proud member of the Kappa Delta sorority, Delta Mu chapter.”

“She enjoys vacationing on the beautiful beaches of Delaware and visiting the Marine Corps Reserve Center, where her father previously worked and resided,” the program said.