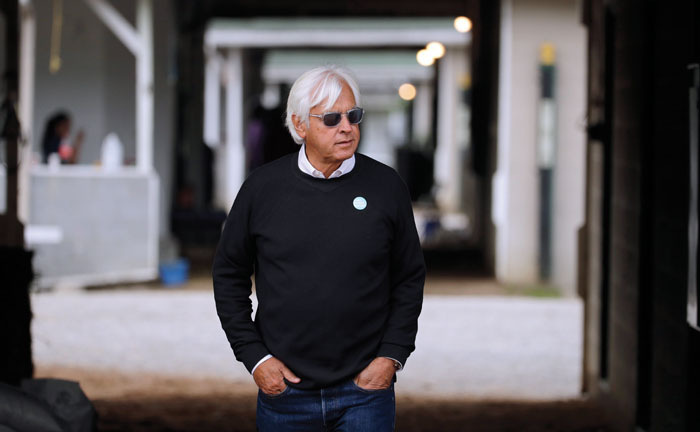 Trainer Bob Baffert looks out from his barn before a workout at Churchill Downs Wednesday, May 1, 2019, in Louisville, Ky. (AP Photo/Charlie Riedel, File)

By BETH HARRIS AP Racing Writer
LOUISVILLE, Ky. (AP) — Bob Baffert times three. In a Kentucky Derby lacking a dominant favorite, the two-time Triple Crown-winning trainer saddles the top three choices.
On what could be a wet day at Churchill Downs, Game Winner is the pre-race favorite, albeit a tepid one at 9-2. Improbable and Roadster were installed as the co-second choices at 5-1.
“Last year we came in here with Justify and we knew it was my race to lose,” Baffert said.
The 19-horse field for the 145th Derby on Saturday reflects the prep season leading to the opening leg of the Triple Crown: no one horse commanded the attention.
“There are a lot of good horses in here,” Baffert said. “They’re a pretty evenly matched group.”
The picture got scrambled again when initial favorite Omaha Beach was scratched because of a breathing problem, dealing a devastating blow to 68-year-old trainer Richard Mandella, whose Hall of Fame resume lacks only a Derby victory.
That prompted the early odds to be redone. The race also lost 30-1 shot Haikal after the colt was scratched with an infected left front foot.
“This is a crazy game and anything can happen,” said Bret Calhoun, who trains By My Standards. “We just have to hold our breaths until we get there.”
War of Will benefited slightly from Haikal’s scratch. He won’t have to start in the No. 1 post, which will be left vacant. The field will break from posts 2 through 20.
A win by any of Baffert’s trio would tie him with Ben Jones for the most Derby victories with six. He would become the first trainer to win the race in consecutive years twice. His last back-to-back winners were in 1997 and ’98.
Baffert won last year’s Derby — the rainiest on record — with Justify. Saturday’s forecast calls for a 90 percent chance of rain and a high of 66 degrees (18 Celsius).
It sure looks like anybody’s soggy race this time.
“It’s whoever gets the trip,” Baffert said of the 1 ¼-mile journey. “Especially now that it’s going to rain, we don’t know what is going to happen. It’s too bad the weather is not going to work with us.”
Game Winner finished second to Roadster in the Santa Anita Derby. Roadster’s only loss in four career starts was to Game Winner. Improbable went 3-0 last year, including a win on the Churchill Downs dirt, and finished second in this year’s Arkansas Derby.
A victory by any of the four California-based horses would surely boost the struggling industry in the state, where a spate of 23 horse deaths over three months at Santa Anita triggered a raft of medication and safety rules changes that are affecting the rest of the sport.
Every horse in the Derby, except Japan-bred Master Fencer, will run on Lasix, the anti-bleeding medication allowed on race day in the U.S. Churchill Downs and the other Triple Crown tracks announced recently the drug will be banned starting in 2021.
Game Winner’s breeding suggests a sloppy track would appeal to him, although he’s never raced on one. Neither has Code of Honor, Roadster, Tax and Vekoma.
Horses that are 1-for-1 on off-tracks are: Master Fencer, Maximum Security, Spinoff, Tacitus and War of Will.
Those with one or two losses on such tracks are: Bodexpress, By My Standards, Country House, Cutting Humor, Gray Magician, Improbable, Long Range Toddy, Plus Que Parfait and Win Win Win.
Baffert touted undefeated Florida Derby winner Maximum Security as the horse that should be the favorite.
“He’s a horse that nobody is talking about and that’s a horse that I’m worried about,” he said. “He’s run faster than we have.”
Gary and Mary West have two shots to win their first Derby since they own both Game Winner and Maximum Security.
The other trainers besides Baffert with multiple starters are Bill Mott and Todd Pletcher.
Mott, the second winningest trainer all-time at Churchill Downs, saddles Tacitus and Country House in pursuit of his first Derby win in a Hall of Fame career.
Pletcher has gone under the radar with a couple of 30-1 shots: Cutting Humor and Spinoff.
Master Fencer is one of two 50-1 shots and the first Japan-bred horse to run in the Derby. He’s never run in a Grade 1 race and got in when three other horses ahead of him on the Japan Road to the Kentucky Derby leaderboard weren’t nominated to the Triple Crown.
Keep an eye on Cutting Humor, if for no other reason than the 30-1 shot’s new rider is Mike Smith. The Hall of Famer picked up the mount Friday after his original Derby horse, Omaha Beach, was scratched. Smith won his first Derby aboard 50-1 shot Giacomo in 2005. He and Justify began their Triple Crown sweep last year with a win in the Derby.
Post time is 6:50 p.m. EDT.
___
More AP sports: https://apnews.com/tag/apf-sports and https://twitter.com/AP_Sports

Column: Plenty of worries heading into Run for the…