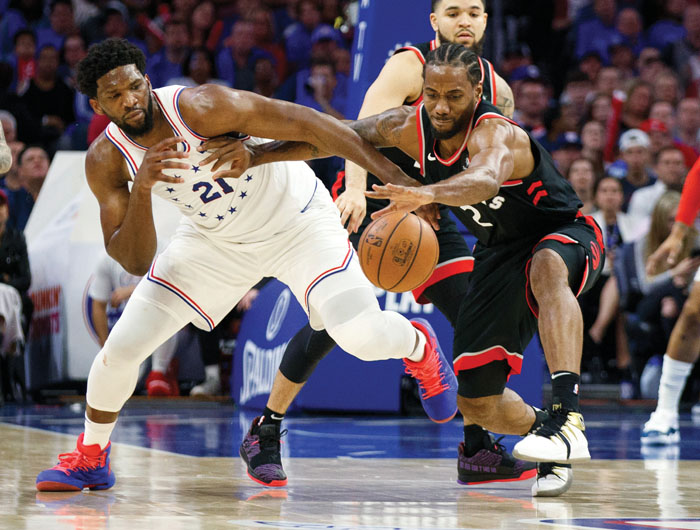 Toronto Raptors' Kawhi Leonard, right, reaches for the ball as he holds off Philadelphia 76ers' Joel Embiid, left, during the second half of Game 3 of a second-round NBA basketball playoff series Thursday, May 2, 2019, in Philadelphia. The 76ers won 116-95. (AP Photo/Chris Szagola)

By DAN GELSTON AP Sports Writer
PHILADELPHIA (AP) — Joel Embiid refused to get tripped up back home in the postseason, scoring 33 points and playing to the “MVP!” chants to lead the Philadelphia 76ers to a 116-95 victory over Toronto Raptors on Thursday night.
Philadelphia took a 2-1 lead in the Eastern Conference semifinal series.
Embiid also had 10 rebounds, shaking off a pair of passive games and became the driving force on offense the Sixers needed as they chase their first NBA championship since 1983.
He made the game his own in the third quarter and helped the Sixers put away a Raptors team badly overmatched outside of Kawhi Leonard’s one-man gang performance.
Embiid struck a chord when he buried a 3 in the third that stretched Philadelphia’s lead to 12. That was start of a string of plays that got Toronto’s attention. Embiid chased a loose ball and was tripped when Pascal Siakam intentionally stuck out his right leg and sent Philly’s All-Star tumbling to the court. The crowd went wild and Siakam was hit with a flagrant foul. Embiid made both free throws as fans — including some of Philadelphia’s biggest sports stars — serenaded him with chants of “MVP! MVP!”
Jimmy Butler, the Game 2 star, dunked off his own steal and the Sixers had quickly put the game out of reach. Butler had 22 points.
Embiid scored another layup and waved his arms and pointed with a smile as wide as the hoop. Embiid went 9 of 18 from the floor and made 12 of 13 free throws.
It was moments like this why the 76ers endured the painful Process — the years of tanking seasons for high draft picks, like in 2014 when they drafted Embiid with the No. 3 overall pick.
Hall of Famer Allen Iverson and rapper Meek Mill engaged in a lengthy embrace from the courtside seats and the Sixers are two wins away from their Eastern Conference final appearance since 2001.
The Sixers just had to survive Leonard.
Leonard toyed with Ben Simmons in the third to lead Toronto’s charge back into the game. The Raptors ran Simmons through screens to give Leonard the space he needed to create and bury open jumpers. And when there was no space, Leonard simply bullied his way to the basket. He shoved a right elbow into James Ennis III and spun around him for a two-handed jam. Leonard made all six baskets and scored 14 points in the quarter to cut the deficit to eight points.
Leonard scored 33 points for the Raptors, and Siakam had 20.
The Sixers were grateful with a series split against the Raptors after suffering a losing streak in Toronto that dated to 2012. They returned home to a delirious crowd amped for one of the most crucial games of the Process era.
Embiid averaged only 14 points and shot 28 percent (7 of 25) from the floor in the first two games and was tied up by Marc Gasol in frustrating fashion.
Not in Game 3. Embiid buried a 3 and followed with a sweet spin move on Gasol the next time down that got the Sixers rolling. The franchise center’s sweetest play came when he blocked Leonard’s layup in the lane, hustled back and got the ball in his hands, and connected with Tobias Harris in the corner for a 3. Embiid scored 18 points in the half and pushed the Sixers to a 64-53 lead at the break.
TIP-INS
Raptors: Serge Ibaka was hit with a flagrant foul on JJ Redick in the first quarter.
76ers: Simmons, an Australian, smacked Kyle Lowry right in the land down under and sent the Raptors guard down and smacking the court in pain. … Greg Monroe (sprained left ankle) and Mike Scott (right foot) played … Phillies slugger Rhys Hoskins, Flyers star James van Riemsdyk and Eagles QB Carson Wentz rang the ceremonial Liberty Bell to start the game.
UP NEXT
Game 4 is Sunday in Philadelphia.
___
More AP NBA: https://apnews.com/NBA and https://twitter.com/AP_Sports